¦ Gold's Key Pop: Last year's high of 1362? Gone, price trading up to 1365 in the 06:00 GMT hour on Thursday. For the run toward our "conservative" forecast high in 2018 of 1434, getting past last year's peak is a first milestone, the next one obviously being Base Camp 1377. Once thought to be the saving grace following Gold's fallout from its All-Time High of 1923 (06 September 2011), 1377 has since morphed into the thorn in Gold's side -- or perhaps better stated -- into its head. So much so that 1377 has been in the title of two prior Gold Updates and went on to become our correctly forecast high for 2016, (revised upon price clearing the 1280 level that year). Now having settled yesterday (Friday) at 1349 -- and the "expected weekly trading range" presently at 28 points -- Gold can stand on the 1377 threshold in a mere week's time. Should we there arrive, does 1377 then become the point of no downside return? On verra, mes amis...

¦ Stocks' Blow-Off Top: We've been around enough decades to identify a stock market "blow-off" when we see one. And yesterday's finale to the week sure looked like one. The S&P 500 -- already beyond "overbought" by so many measures that they all ought be discarded as useless into the dust bin -- on Friday traded 149% of its "expected daily trading range", going essentially straight up post-lunch. Our take remains that the tax cut's benefit to corporate bottom lines was priced into the market when the S&P went bollocking up by better than 100 points in mere days during afterglow of the StateSide election back in November 2016, the Index then reaching 2200. Today 'tis nearly 2900. Our "live" price/earnings ratio for what has now slipped to become the "S&P 422" ('twas the "S&P 424") -- by benevolently excluding those constituents earning less than $1/share -- is now up to the wild-ass level of 39.2x. Seriously? Q1 earnings shall tell the tale when they start flowing in right 'round Tax Day (15 April).

"But mmb, what about synergies really ramping up earnings even more?"

As ever, Squire, your expanding vocabulary leaves us nothing short of impressed. To be sure when it all goes great, 1 + 1 = 3. But they shan't equal 9 or whatever ridiculous summation has been priced into the stock market. Bear in mind that a 25% correction in the S&P back to 2200 shall still find it "expensive" even down at that level. Thus as the stock market becomes bitcoin, you best be careful.

To Gold's weekly bars we go. And as price appears to be closing in on Base Camp 1377, we do reiterate this note of technical caution: Gold just recorded its sixth consecutive weekly "higher high". 'Tis only the fourth such occurrence since the All-Time High 333 weeks ago. Millennium-to-date (891 weeks), a seventh straight "higher high" has only occurred nine mutually-exclusive times, and just once since the All-Time High. With the Dollar Index down to critical support at 88.880, any near-term firming there likely stems -- at least for a bit -- further upside for Gold, especially as many-an-analyst can make the case for price running out of puff as it comes into what's been "the roof" of 1377: 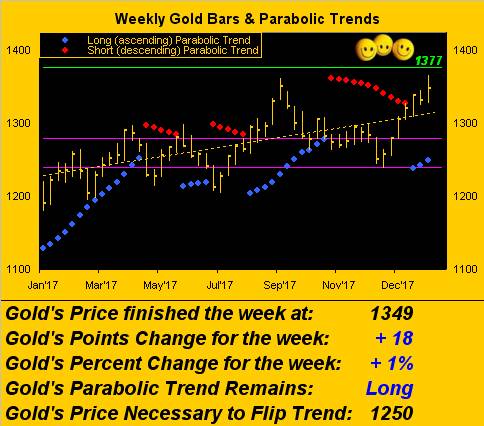 As to the noted "critical support" for the Dollar Index, it shows quite stark here by the paired violet lines in this 20-year, month-by-month view:

'Course, Gold a-go-go goes well with Fed a-no-go. Lost in the relentless reporting on all things Trump (and nothing but) is Chair Yellen's overseeing her final Federal Open Market Committee meeting this Tuesday/Wednesday (30/31 January). Given 1) the present FedFunds target rate range of 1.25%-1.50%, 2) the FedFunds futures having settled out the week at 1.49%, 3) a barely positive retail inflation reading for December and one that was deflationary at the wholesale level, 4) the slowing in home sales, 5) the first peek of Q4 Gross Domestic Product showing a slide to +2.6% when +3.0 was expected, and 6) the overall decline in our Economic Barometer since its 20 December peak: does the FOMC vote to raise their bank's rate? No. Nor is the Chair scheduled to meet the press post-policy statement: its release at 2:00pm Eastern Time this Wednesday will likely find a farewell luncheon already well underway over at The Palm or Cafe Milano, Yellen relaying the baton over a plate of steak-frites to Powell. "Here. Have fun." Here are the declining Baro and straight-up S&P:

Now into the nitty-gritty of the pricing paths for the precious metals. We start with the following two-panel graphic of daily bars from three months ago-to-date for Gold on the left and Silver on the right. The "Baby Blues" depict the consistency reading taken each day of the respective market's 21-day linear regression trend. Above the +80% line confirms such trend's being fully intact through that day. But when the blue dots start to sink, as we see has been the case for Silver for some three weeks, such trend has started to break apart. Again: with Gold near to the Base Camp 1377 area, there is a technical case to pack profits and go to ground, which in turn wouldn't fare any better for Sister Silver:

For the coming week, in addition to the perhaps overlooked FOMC statement, we've got in our face some 21 Econ Data metrics set to hit the Econ Baro. About half of the reports due look to better the Baro, whilst half look to weaken it. So in a week's time the Baro may well appear at the level it currently is. As for the S&P, shall the Index further its venturing up into Oz, or retreat to Kansas? Stand by, Toto.

Finally this with respect to Klaus Schwab's World Economic Forum over there in our beloved Switzerland. Indeed in speaking of Oz, Davos was again descended upon by some of the smartest financial wizards alive. But from our perspective, this annual wintry right of mental masturbative psycho-babble bilge from each elite trying to out-bilge the other elite is simply unpalatable for us. We see it as a sort of modern-day version of H.G. Wells "The Time Machine", the Morlocks out to cannibalize -- in this case the wealth of -- us dumb-downed Eloi. Well, this dumb ole Eloi ain't fallin' for it. "So don't gimmie no lies and keep yer hands to yourself!" --(The Georgia Satellites, '86) and off of my Gold!

Quite the snow job, that... 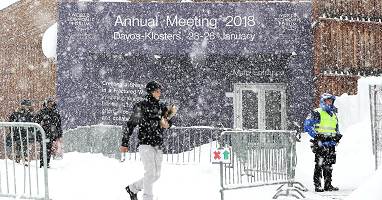