What Does a Broad Stock Market Correction Mean for Gold Stocks?

On Monday, February 5th, 2018 we experienced ‘Volmageddon’ (Volume Armageddon) where the low volatility indexes got crushed.

Now, a lot has changed since Black Monday over 30 years ago, but there are similarities.

The 1987 crash came during a long a bull run starting in the early 80’s that emerged from a terrible recession. The long bull run had made many people complacent. So, of course people are saying a similar crash could happen again… and even usher in a bear market in stocks.

The age of irrational exuberance – coupled with the rise of quants (traders and analysts with complex mathematical and programming backgrounds) – makes it difficult to predict the end of any stock market rally.

Adding to the issue of capital movement and flight, Bitcoin even knocked on and poked its head thru the $6000 door earlier this week. At the same time, I’ve also seen a blockchain company that makes less than $5 million per year in revenue trade at a market cap of over a half of billion dollars. Some sanity would be good for the markets. And a healthy correction to reduce the froth is never a bad thing.

What we now know is that if the bull market in stocks and bonds is to end, the implications will be dire. This is because, historically, the Fed has always intervened to prop the market by lowering interest rates.

Today, interest rates around the world are still low. And more importantly, the new Fed Head just sworn in this week, Jerome Powell, has openly stated they plan on raising rates (if this proves not to be the case, he doesn’t have much room to go lower).

This means that the Fed would have limited options to stop the bleeding.

One viable option that remains is negative interest rates. If any President can pull off negative U.S. interest rates, President Trump is the one. Remember, Trump thought Trump University and Trump Taj Mahal in Atlantic City were also good ideas.

But I make my living putting money to work in the natural resource markets. And Fed moves impact the broader market equities and impact resource equities alike. So let’s take a look at the effect of a general market correction on our resource portfolio…

How Does Gold Perform in a Recession?

One way to get bear market insurance is to buy physical gold. In bear markets, gold tends to perform better than stocks. This is because investors see gold as a safe haven.

Year to date, the gold price has increased 1.0%. And history shows that gold tends to perform better than stocks in periods of recessions or market corrections. For example, gold peaked in 1980 when its price soared to $850 per ounce.

In the table below, you can see how gold tends to perform against the S&P 500 during the most extreme corrections since 1976.

Put differently, the chart below shows how gold performs during recessions (shown in red bars). The black line is the price per one ounce of gold. 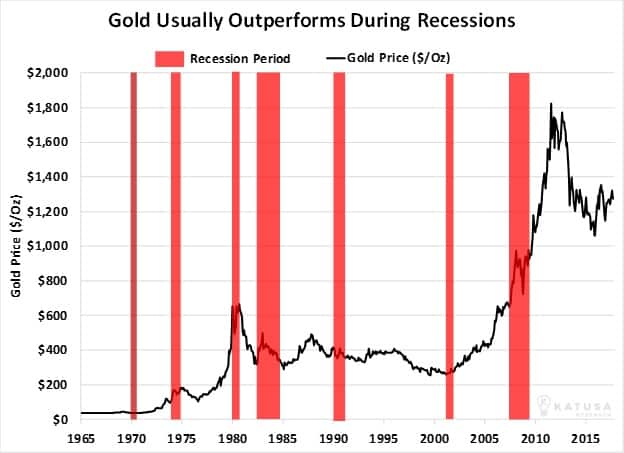 The data shows that gold will perform better than the S&P 500 if or when there is a recession in the future.

There is a misconception that gold cannot do well in an interest rising environment. The fact is that in a rising interest rate environment, gold can – and has – increased in price. 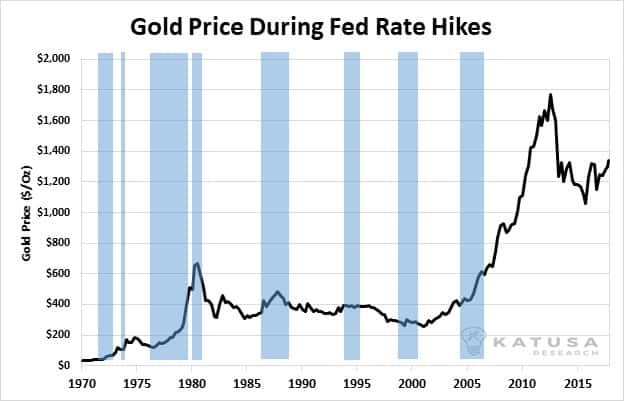 The questions you should be asking yourself is this:

“Will the U.S Fed continue on the path of higher interest rates with a recently spooked stock market,

or will they keep the easy money policy alive?”

I will argue that gold will do well in both scenarios. But that is a very complicated argument that I will explain in a future essay.

Gold Stocks in a Recession

Another way to hedge your exposure to the overall market is by turning to gold mining stocks.

Traditional diversification theory suggests that you invest in a sector by investing in the leading industry ETF. In this case, it suggests that you should invest in the VanEck Vectors Gold Miners ETF, GDX. But be careful with ETF’s and know exactly what you’re buying… just ask the shareholders of the XIV exchange traded fund how they felt losing 100% on February 6th 2018, the day after Volmageddon.

We think there are better ways to invest in the gold sector for the informed and active investor than putting your capital into gold ETFs.

If you are reading this, you have already spent more time on the gold sector than most money managers buying Gold ETFs.

So how do gold stocks perform when broader equity markets correct? 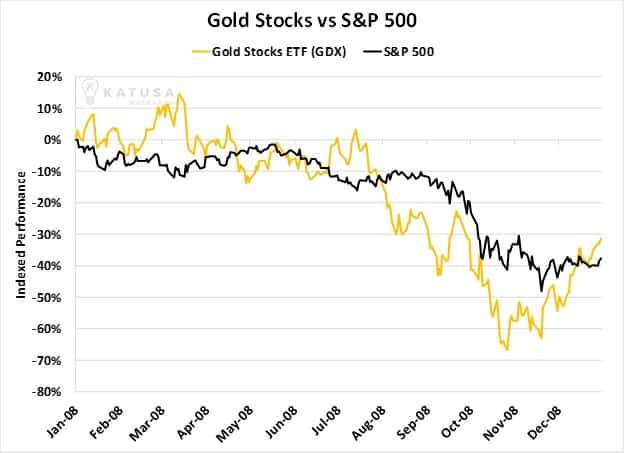 Gold stocks are extremely cyclical in nature. They can have explosive recoveries unlike their broad market equity counterparts after a steep and sharp correction as seen during the recovery from the 2008 low in the chart below… 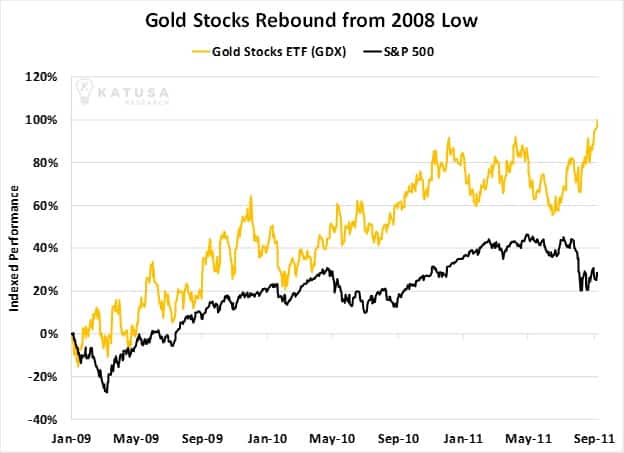 Going back to the dot-com bubble reveals a similar trend. Between March and October of 2002, the S&P declined by 31%. On the other hand, gold stocks like Goldcorp, Kinross, and Randgold were all up over 20% as you can see in the chart below. 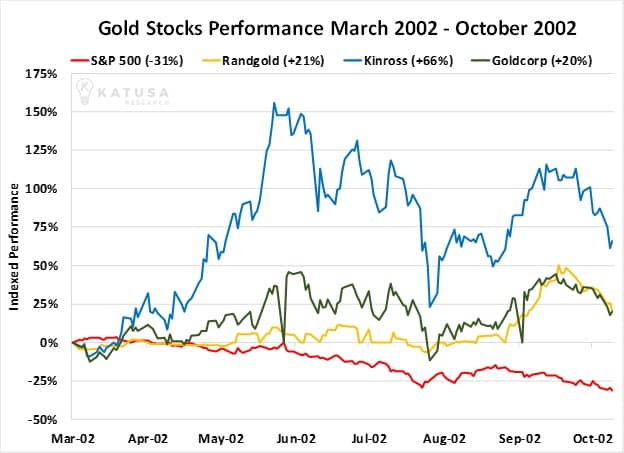 Below is a table which shows the performance of individual gold stocks during the past 2 crises. The recovery period is the time taken to approximately regain the pre-crisis levels in the S&P 500.

It’s clear from the table above that gold equities are very cyclical. Whatever gold stock you own or plan on owning make sure that the company is run by experienced invested management and that the projects can survive a decline in the gold price.

Even though I am very bullish on gold and gold equities, in the long run, we’ve seen that anything and everything will happen in the global markets.

U.S. interest rates can rise, stay where they are or even decrease (and even the unthinkable-negative interest rates could happen under President Trump). Each option has incredible ripple effects on the global economy which will affect the gold spot price and even gold equities.

When overall stock market corrections happen, they don’t leave any stocks behind.

Contrary to popular belief, gold stocks are not spared while physical gold has proven to perform well in corrections.

Prudent investors will look for any market drop to add to existing gold stock positions at bargain prices. Greed will always lure frantic buyers for fear of missing out (FOMO), but panic selling presents buyers with excellent opportunities for entry into your favorite gold stock.

Depending on whether gold is for your own portfolio or not, you need to ask yourself a few questions on your personal tolerance for risk and style of investing.

If you’re reeling from the correction and can’t sleep at night, you probably have too much equity exposure and not enough cash. If you’re finding that’s the case, my article on “How Many Stocks Should You Own” is always a good refresher.

Where am I putting my own money?

I believe the precious metals sector has massive upside from today’s levels and that gold and gold stocks play a pivotal role in any investor’s portfolio.

No company can ever buy its way onto my recommended list and more importantly, I disclose the purchase price of every stock.

Also included in our material are the many studio interviews where I ask tough questions to the directors and the management teams of the companies that are in our portfolio. I’ll even go to the site and speak directly to the operations teams and geologists to get my facts.

There is no doubt you can do all of this on your own, and spend millions of dollars in due diligence and your own valuable time doing what I’ve learned to do over the last 15 years doing this full time… or you can secure your membership and have a look over my shoulder to see every move I am making in the gold junior space.

I hope to see you there.