Gold Drips as the Buck Regrips

Let's start with this "Think Quick!" hit: Gold's price direction always moves opposite to that of the Dollar. If you said "Wrong!" you're right. But you might be surprised just how often they actually move in the same direction: for the 206 months (including this February) of the millennium-to-date, Gold and the Dollar Index have recorded net changes of the same direction in 79 months, i.e. they've been in positive correlation some 38% of the time ... which for you WestPalmBeachers down there means that Gold and the Dollar have been moving in opposing directions only 62% of the time, (not 100% as we're oft led to believe).

That said, Gold and the Dollar year-to-date have been in almost perfectly-mirrored negative correlation as we here see from the get-go. Good or bad depends on which side of the glass one is found to be had: 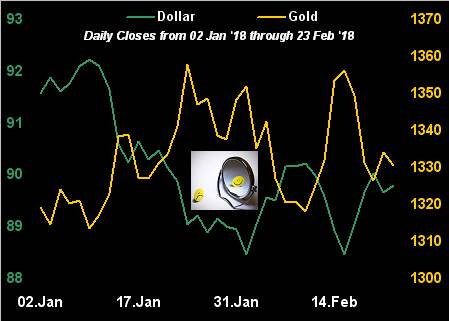 That shall be the "then". The "now" reminds us that Gold cannot get to the "then" of 2000 without first getting up past Base Camp 1377. Sick of hearing about it? You ought be. Whether referring to 1377 as the "resistance that was support", or as "the roof", or as some "anti-magnetic force" repelling price back down every time it gets close, or as just depicted a week ago as Gold's "highest hurdle in history", 'tis what 'tis: just when 1377 looks en route to be taken out, time and again instead 'tis Gold that's taken out of the lineup and sent back to the locker room.

So once again this past week, rather than having leapt up and over the 1377 hurdle, Gold tripped and fell down to its third lowest weekly close of the still young year, settling yesterday (Friday) at 1331. Still as we turn to Gold's weekly bars, the overall dashed linear regression trendline remains gliding upward, as do the blue dots of parabolic Long trend, all whilst price has sustained itself above the 1200s year-to-date (jinx, jinx, jinx): 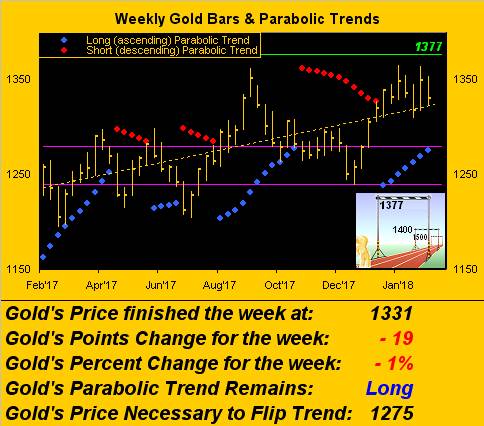 In fact, Gold on balance has been fairly firm through here even in the face of the Federal Open Market Committee having suggested (per their 30-31 January meeting minutes) a faster pace for raising their Bank's key rate. The June FedFundsFutures are priced to a yield of 0.25% higher than that for the present March contract, so Powell & Co. most certainly will press the rate rise button come their 21 March policy statement. And specific to the economy itself, following a quiet week of incoming Econ Data, we've next a busy one as we glide into March. There are 16 metrics in the new week due for the Economic Barometer which ought shake its recent malaise up (or down) a bit:

As for the near-term trending of the precious metals' prices, here we've our two-panel graphic covering the last three months-to-date of daily bars for Gold on the left and Silver on the right. And therein we see positive clues from the "Baby Blues". Similar to their state of a week ago, Gold's baby blue dots (the daily measure of 21-day linear regression trend consistency) continue to hesitate 'round the central 0% axis rather than further fall into negativity: should price firm near-term and the dots resume climbing, we have to think 'twill be enough push for Gold to final hurdle over Base Camp 1377. The same can be said for Silver should the negativity of her "Baby Blues" nonetheless curtail their slide rather than complete the trip below the -80% line, (as is more typical in a stern downtrend):

So as we next turn to the precious metals' 10-day Market Profiles, what do we see (and this is unusual) that is common in both panels?

"Both markets are on their longest lines, mmb?"

Sharply-eyed is our Squire. Both Gold (below left) and Silver (below right) closed out Friday on their most heavily-traded prices of the past two weeks, 1331 for Gold and 16.50 for Silver. That is pricing consensus à la mode, albeit the Gold/Silver ratio of 80.7x remains well out-of-whack. Simply bringing Sister Silver's price up to be in line with the ratio's millennium-to-date average of 63.0x puts her at 21.13. That's arbitrage, baby. Do it via the Silver miners? That's leverage, baby!

In closing we've these three observances:

¦ We pointed out a week ago that "...'tis been the world against the Dollar as, save for the Bond the balance of our BEGOS Markets (Euro/Swiss, Gold/Silver/Copper, Oil, S&P 500) have been in lockstep positive price correlation for better than a week..." Now post-FOMC minutes, we're seeing signs of such correlation beginning to break up. This may be a function of the Dollar, (having briefly traded above 90.0 this past week) facing the reality of resistance up to 90.7. So much for luck, or its lack, from the Buck.

¦ Did you see the headline that "Stocks end the week with strong gains"? 'Tis all relative from where one measures. The S&P 500 for the past week posted a net gain of 15 points: +0.6%. Hardly impressive given, per our Market Ranges page, the "expected daily trading range" for the S&P futures remains extremely high at 62 points, and that the bid and offer sizes are still only running at best 50% of normal: thus the rampant volatility. Add in that now late in Q4 Earning Seasons some 60% of S&P components' have bettered their bottom lines from Q4 of a year ago, but that earnings overall support an S&P of just half its current level, and 'tis no wonder that our expectation for a 25% correction is deemed modest by some we know.

¦ Wonder indeed if the mighty Goldman Sachs is short bitcoin, et alia, up the wazoo. We learned in December that the elite investment bank is to have a trading desk toward making a market in the cryptocrap. Now just a week or so back, they're musing about much of it going to zero, (or as Bank of England Governor Mark Carney put it this past week, bitcoin "...has pretty much failed..." as traditional money). A little bit of this and a little bit of that don't always add up, especially should cryptos run to zero.