Coming off of 2017, a year in which global diamond supply by volume increased by 11.7% year-over-year, supply is forecast to contract by 3.4% to 147M carats in 2018 (see appendix at bottom for itemized analysis by mine).

Out of the world's top three diamond miners by volume, only De Beers is expected to increase production this year, while diamond output at Russia's ALROSA (MICEX: ALRS) and diversified-major Rio Tinto (LSE: RIO) is estimated to decline, more than offsetting De Beers' increase. Combined, the three companies represent approximately 70% of global diamond supply by volume. 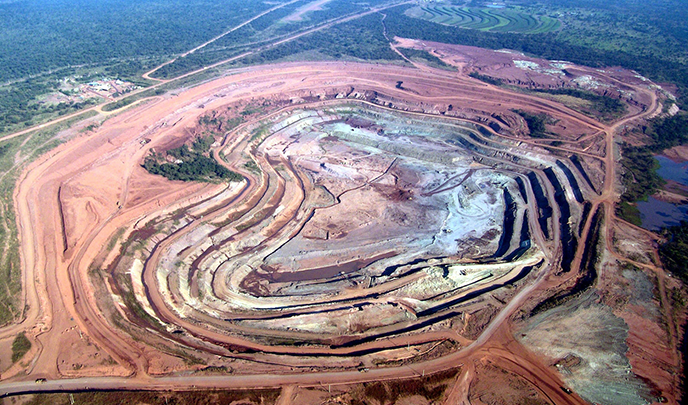 The Catoca mine in Angola. Image source: ALROSA

At current estimates, De Beers would be producing at approximately 95% of production capacity in 2018, which compares to 91% last year and only 80% in 2016. De Beers' strategy of "producing to demand" over the past two years has reduced the company's excess inventory to more normal levels. With as much as 12M carats of excess inventory on hand at year-end 2015, the company now only holds 3-4M carats over minimum operating levels, the lowest figure since 2014, according to estimates.

At the moment, De Beers marketshare by value produced and sold is 37%, which is down from 45% a decade ago and down from over 80% in the late-1980's, before the industry structurally changed. With no new advanced-stage kimberlite projects in the works and with production close to capacity, it is unlikely that the company's market share will significantly revert to higher levels in the short-to-medium term without an acquisition, which even then would be limited by antitrust restrictions. 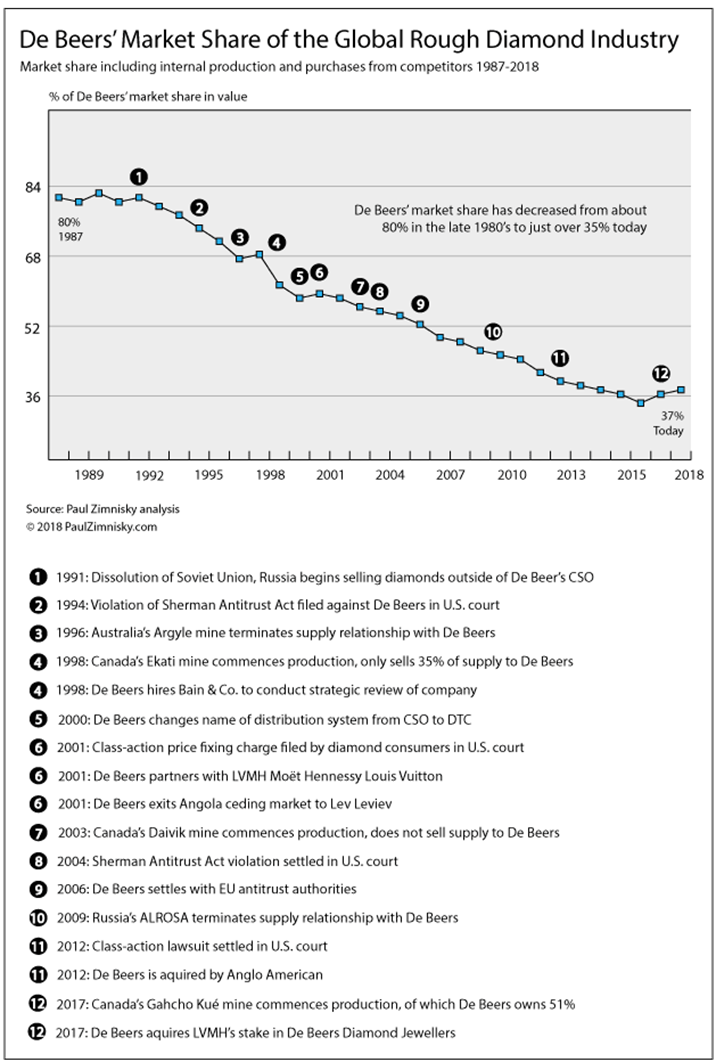 ALROSA
ALROSA is estimated to be the world's largest producer by volume in 2018, with an output of 36.6M carats. However, this would be down from 39.5M carats last year. The year-over-year production decrease can be attributed to lost production at the company's Mir mine following a flooding accident last summer but also a decrease in production at the Jubilee mine, a result of normal depletion.

Mir produced 2.8M carats last year prior to the accident and 3.2M carats in 2016. In an investor presentation from January 2018, ALROSA accounts for zero production from the Mir mine through 2020. Jubilee has been ALROSA's largest producing mine by volume for the last two years, however, production is estimated to decrease from 10.1M carats last year to 8.2M carats this year, and decline further to 5.9M carats in 2019 on decreasing grade.

Offsetting some of the lost production at Mir and Jubilee will be the commencement of production at the company's newest mine, Verkhne-Munskoe, which will begin commissioning later this year, and ramp up to 1.8M carats of commercial production annually by 2020.

Rio Tinto
The industry's third largest producer by volume is diversified mining major Rio Tinto. Rio only has interest in two producing diamond mines, its 100%-owned Argyle mine in Australia and a 60% stake in the Diavik mine in Canada. By volume, 76% of the company's net production is estimated to come from Argyle, which is largest mine in the world in terms of carat volume produced. The majority of the mine's production is low-quality in size and color, and the mine's economics are driven by the occurrence of fancy pink diamonds which fetch a significant premium to white and most other fancy colored stones. In 2018, Argyle's production is expected to decrease by 3M carats year-over-year to 14M carats. 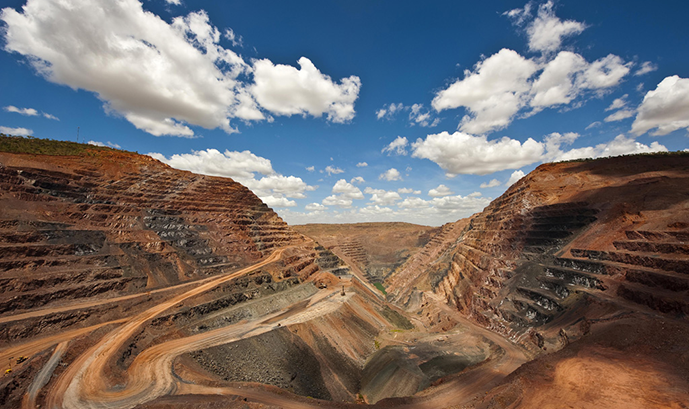 The Argyle mine in Australia. Image source: Rio Tinto Plc

Argyle production commenced in 1983 and at one point the mine produced as much as 40M carats annually, making it arguably the industry's most important mine for a number of years. However, as a result of normal depletion, annual production has since dropped to 14-17M carats in recent years. In 2016, Rio took at $241M impairment charge on Argyle after reassessing mine-life expansion economics, and in March 2018 the company cut the mine's recoverable diamond reserve estimate to 39M carats, thus reducing the remaining life-of-mine to less than three years.

With Argyle production set to cease in 2020, there is an pending a global supply gap until commercial production at Luaxe begins in (or around) 2022, at which time the government of Zimbabwe also expects to significantly ramp up production at its Marange fields with conglomerate mining.

Supply/Demand
With global diamond production expected to decrease in 2018 along with producer inventories at multi-year lows, a demand increase should allow for diamond price upside. A 2-4% increase in diamond demand is quite possible this year given the backdrop of a strong global economy, healthy U.S. consumer sentiment, signs of a stronger Mainland Chinese market, and the Diamond Producers Association increased budget fueling the return of generic diamond marketing. This scenario could translate to a real 3-5% increase in rough and polished prices this year.

Through the end of February, the impact of these fundamentals have already been evident as rough prices are up by approximately 1.0% year-to-date according to the Zimnisky Global Rough Diamond Price Index and surveyed polished prices up 0.5%.

Risks
Looking forward to the remainder of the year, demand estimates could disappoint if tighter-than-expected economic policies in developed economies push interest rates higher than expected, resulting in downward revisions and de-risking of financial markets which could negatively impact consumer sentiment and discretionary purchasing power. More specific to the diamond industry, primary medium and longer-term risks include an acceleration of trends already negatively impacting demand, such as changes in social norms and consumer appetite, for example decreasing marriage rates and changing consumer preferences of younger generations.

More recently, an unfolding story of a banking fraud in India involving at least two large industry players in the manufacturing and retail business will likely have a negative impact all segments of the industry. Concerns range from damaged consumer perception of diamond jewelry, primarily in India, to strained financing availability in the Indian diamond manufacturing industry. The later will likely directly impact demand for rough in the short-term. While at this point the magnitude of the impact is unclear longer-term, there is the potential that the situation is severe enough to offset some or all of the favorable industry dynamics mentioned above this year. 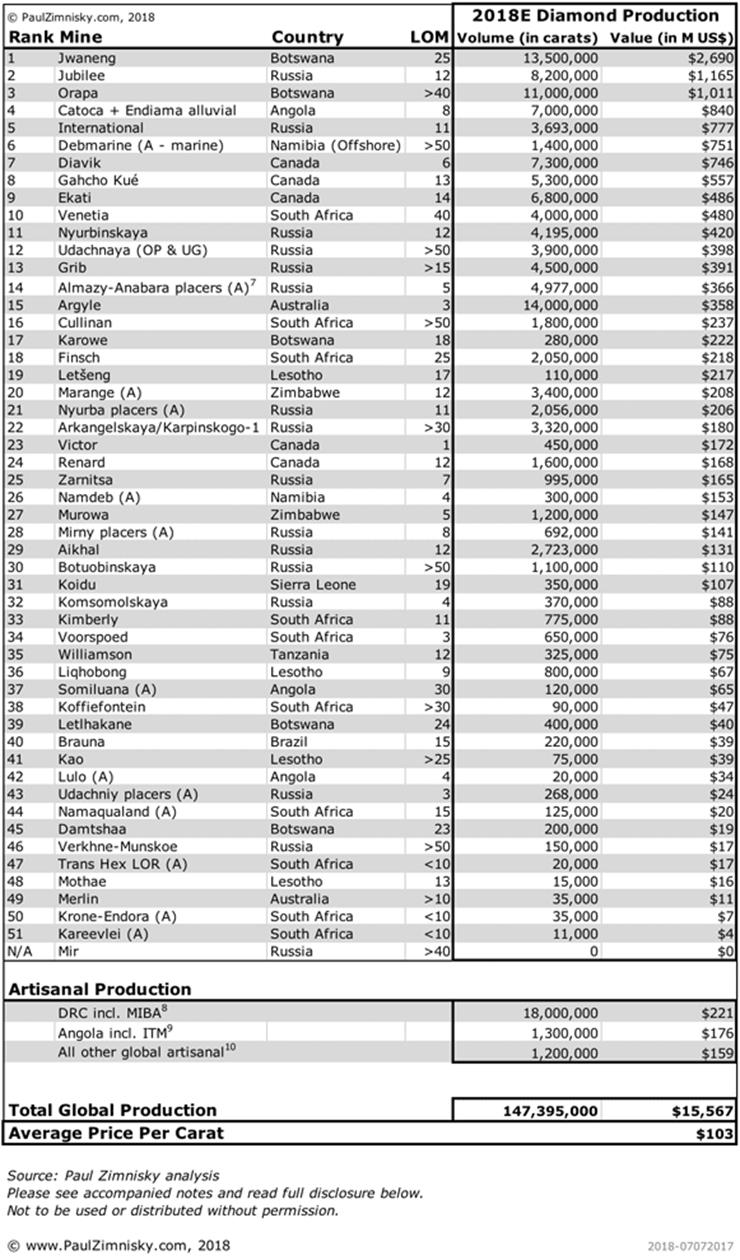 Notes:
1. All figures are estimates based on Paul Zimnisky analysis.
2. (A) denotes alluvial mining operation.
3. OP denotes open-pit mine, UG denotes underground mine.
4. Production value calculated as production volume multiplied by average price per carat produced.
5. LOM is estimated remaining life of mine in years.
6. Catoca figures include 300,000-500,000 carats of production from Endiama alluvial operations, including Luemb, Gango, Quitubia, Vulege, Tchafua, and Luaxe trial mining.
7. Includes Nizhne-Lenskoye placers.
8. MIBA is a commercial alluvial operation 20% owned by London-based Asa Resource Group (formally Mwana Africa) and 80% by the DRC government. In the mid-2000s the mine produced as much as 6M carats annually, but currently produces well under 1M carats, though no official data is released.
9. ITM Mining Ltd is a private company commercially operating alluvial mines in Angola.
10. "All other global artisanal" production coming from nations such as Sierra Leone, Central African Republic, Cote D'ivoire, Republic of Congo, Ghana, Guinea, Guyana, Liberia, India, and Togo.
11. Mine ownership (corresponding with ranking number):

--
De Beers is 85% owned by Anglo American plc (LSE: AAL) and 15% owned by the Government of the Republic of Botswana.

Paul Zimnisky is an independent diamond industry analyst, author of the Zimnisky Global Rough Diamond Price Index and publisher of the subscription-based State of The Diamond Market monthly industry report. On May 9th, 2018 he will be speaking at the Mines and Money investor conference in New York City. Paul can be reached at paul@paulzimnisky.com and followed on Twitter @paulzimnisky.