Gold from Soup to Nuggets

Gold's change for the week just past? A zip-zero-nada bona fide nuthin' burger. Well, ok, it did sport a net gain for the week of 30¢ having settled the prior Friday at 1323.7 and now yesterday at 1324.0. En route, price made both a "higher-low", but also a "lower-high", referred to by traders as an "inside week". Fairly riveting stuff, one has to say. Best have a bowl of soup and a nap.

Speaking of soup, with both wholesale and retail inflation data due next week, food 'round these parts is gettin' pretty pricey these days. Our local grocer whom we love (a shameless plug perhaps, but showing a shameful price) offers this wee vat of chicken soup for $7.99! Roadside robbery that, and indeed, one road said chicken ought not have crossed: 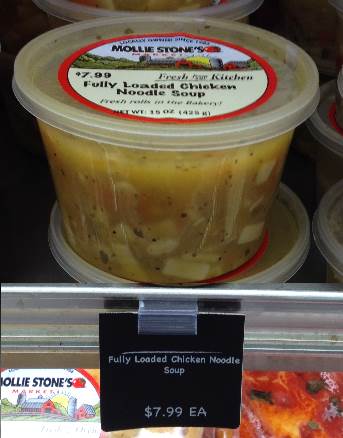 From soup to nuggets, despite Gold's sleepy week, there is some encouraging news on the technical front. Recall this from a week ago? "Gold's study of 'weekly moneyflow' ... has now dipped below the red horizontal line (at 50 on a scale of 100-to-0) ... only the sixth such downside crossing since September 2014: in all five of those prior downside crossings, price then traveled further south by at least 32 points". Now updating the picture, rather than succumb to that study, Gold's price remained sufficiently resilient during the week to instead turn the moneyflow line back up above the 50 level as depicted here by the green arrow:

To be sure, the skeptical technician might merely see this as noise. However, our "more to the story" view is: just as 'twas "cool" to dump Gold on the downside, now 'tis "dumb" not to buy the dips given the ever-increasing 3-Ds, i.e. Debasement, Debt, Derivatives.

Further, per Gold's weekly bars next shown in the year-over-year view, the trend remains our friend, be it both the upward tilt of the dashed linear regression line and the still ascending parabolic blue dots. The rightmost bar depicts its having been the aforementioned "inside week". And yet above it all lies the Base Camp 1377 prize, from which we'll see the buyers banging down the door to get aboard. Good to be well-rested -- indeed positioned-- ahead of that inevitable event: 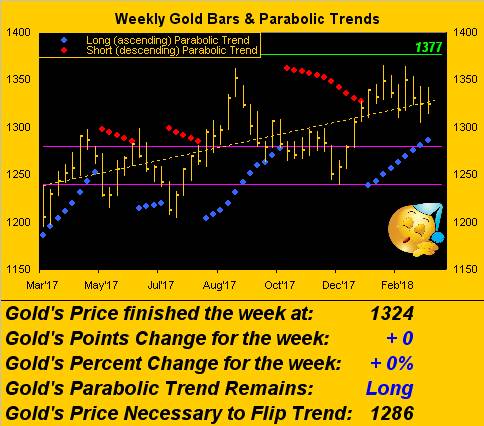 Good gracious no, Squire. In fact, we've been "one-upped", so to speak, by one Daniel E. Pinto, one of the two "Co-Presidents & Co-COOs" at JPMorgan Chase, who in one phrase said to Bloomy TV "It could be a deep correction", one that could reach 40%. The catalysts are, of course, the effects of rising rates of interest and inflation, and stocks' valuations (really?). Mr. Pinto's timeframe is two-to-three years out; ours aims for the 25% slide by this year's StateSide elections in November. Again specific to valuation as noted four missives back on 10 February, a 25% correction in the S&P combined with a re-jiggering of earnings to reflect the new, lower corporate tax rate would brings the Index's median price/earnings ratio down to a "lovely, respectable, credible 16.4x". (You did write it down, non?)

Moreover, there's the state of the somewhat stagnating Economic Barometer. To be sure, yesterday's Department of Labor report of 313,000 non-farm payrolls having been added in February was a sound Econ Baro positive. But the week's full course of data was peppered with other negativity: the Unemployment Rate didn't improve, growth in Hourly Earnings slowed, the Trade Deficit leapt by some $3 billion, the movement of Wholesale Inventories stalled, Factory Orders went backward, and Consumer Credit significantly slowed. Thus with 19 additional metrics scheduled in the new week to hit the Econ Baro, here's its current stance:

Our fellow up there in the hammock rightly is holding onto his Gold, for as we next go to its price by-the-day from 2011's All-Time High Closing High, not only do we clearly see the overall tilt of the trend as up since 2015, but the bright blue line of the 300-day moving average is now at its highest reach in better than three years. Still, oh to get above that green line, eh?

As for the daily bars and regression trend consistencies from three months ago-to-date, here we've our two-panel comparison of Gold on the left and Silver on the right. The phenomena of Gold's blue dots bumping along the underside of their 0% axis is something we don't recall having ever before seen for any of the BEGOS Markets in the many years since stumbling upon the "Baby Blues" as useful trend guidance. 'Course what they're simply telling us is that Gold "net-net" in recent weeks has been trendless -- which differs from the normal pattern of the dots rising and falling from the +80% axis down to the -80% axis -- and again emphasizes that price dips of late are being bought. Sister Silver, too, of late has been slantless:

In turn, directionless trends lead to narrowing 10-Day Market Profiles as we next see for Gold (below left) and Silver (below right), their high-volume trading prices as labeled, with both markets not surprisingly priced presently at mid-profile:

Obviously in the anticipative mind of the trader, range narrowing precedes expansion, which ought be the case over these next two weeks and then some. As noted, the new week through the Ides of March has a deluge of data due for the Econ Baro, the week following then highlighted by the 21 March Federal Open Market Committee's monetary policy statement wherein they'll raise their Bank's Funds Rate into the 1.50%-1.75% target range. Then comes the crescendo of tax season and all that searching for coinage amongst the sofa pillows in order to pay your not-so-fair share by mid-April. Such a lovely time of year, Spring.

We'll leave you with these three notes:

¦ The Paris-based International Energy Agency opined this past week that over the next five years some 60% of crude oil output will come from within the U.S., relegating Mother Russia down to second place. Let them "Collusion! Collusion!" that one. Funny in thinking back several decades upon the University of $poiled Children and its course on the pricing system and resource allocation, we recall our well-liked professor cautioning us that the world shall have run out of oil by 1996.

¦ From one institution of higher learning to another, we note that Harvard economist Ken Rogoff sees bitcoin back at $100 within 10 years time. Why so long, we wonder? Oh: regulation moves quite slowly.

¦ Even further into the future one has to wonder what 'twill be like in the managerial hands of our millennial friends. We dropped into the local five-and-dime store this past week and inquired of their clean-cut young man (save for a chromium bar running through his nostrils) as to if they sold reading lamps. "What are those?" came the question to my question. Upon explaining that it is a light to enable one to read in the dark came the reply "I don't know what that is." Jeepers creepers. 'Tis said that chicken soup can improve and energize one's brain, regardless of age. Perhaps a bowl of that $7.99 soup from down the street might help: given the minimum wage ordinance here in San Francisco is $14/hr. -- to be increased to $15/hr. come 01 July -- the lad ought be able to afford it.

In any event, our stance remains that, chicken soup or nuggets notwithstanding, one cannot afford being without some Gold!