You know the expression: "Get in, strap down, shut up, hang on!" For the agonizing narrow road upon which Gold has been slowly trudging these recent weeks is due to suddenly widen into a superhighway. And there's no week like this new week for it to happen. But here's the key question: in which direction? Up or down? Doubtless in a week's time we shan't find Gold where it settled yesterday (Friday) at 1314.

From our "Preaching to the Choir Dept.", we view Gold's main upside driver as the broad-based debasing of currencies, the inevitable result of too much dough, debt and derivatives. Gold generally benefits as well from the "U-word" -- Uncertainty -- of which there seems a burgeoning plethora here, there and everywhere over this, that and the other thing. And yet, for all the world, Gold throughout these recent weeks has been dead in the water. So much so that of the 11 trading weeks year-to-date in 2018, Gold has traded in the 1320s during 10 of them. Cue for the umpteenth time Chris Isaac's "Goin' Nowhere"('95).

That in mind, Gold time and again goes from being a narrow trade to one swiftly swayed. Already priced into Gold is this week's Federal Open Market Committee announcement come Wednesday (21 March) of their Bank's Funds Rate being up-shifted to the 1.50%-1.75% target range. But as they say, "the devil's in the details", and not just from those in the policy statement, but as well from those to emanate from Fed Chairman Powell as he faces the press for the first time post-statement. All of which brings us to the "perfect timing" for some serious price sway per this chart: from one year ago-to-date these are Gold's weekly trading ranges. When the range gets as low as is now currently shown, narrow then goes wide every time: 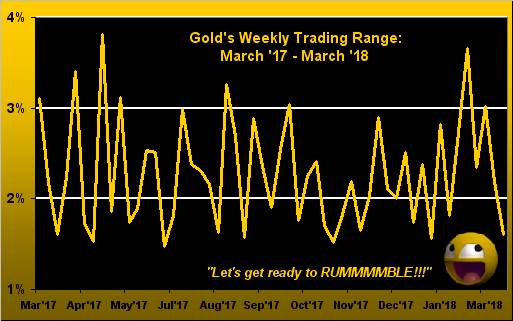 But remains the question, in which direction? As much as we're routing for "up" on the ole quip to "sell the Fed rumour, buy the Fed news and leave 'em all confused", neither from a technical basis can we rule out "down". Here's one view why as we turn to Gold's weekly bars: the rising blue dots of parabolic Long trend now only allow for 23 points of downside wiggle room without flipping said trend to Short: just an intra-week drop of 1.8% will be enough for that to trigger. Oh woe, the Whiny 1290s once again, you know ... say it ain't so! Rather, c'mon Gold: get off the schneid and resume that up-glide! 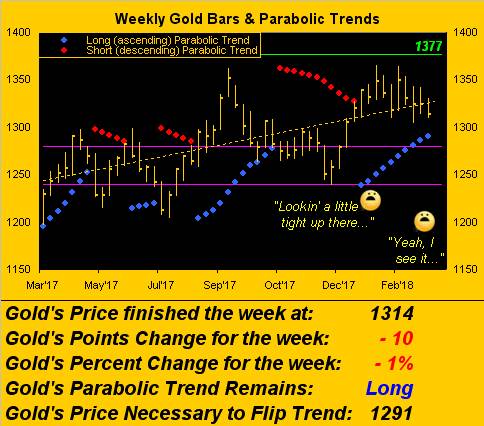 Here's another negative technical view as we turn to Gold's "Baby Blues". Below in the left-hand panel across Gold's daily bars from three months ago-to-date, we see it finally happened: the baby blue dots of 21-day linear regression trend consistency ultimately resolved to the downside after teasing the underbelly of the 0% axis for some three weeks. Strictly in the technical vacuum, we'd anticipate price to succumb as well, albeit as you can clearly see across the panel, Gold is yet again in the area from which the dip buyers have emerged. Below in the right-hand panel, 'twould appear dip buying time, too, for the suitors of Sister Silver. Either way, precious metals traders will have their hands full in the new week:

Full as well ought come the rationale for the Fed's rate hike and guidance. But were we given a place at the press table, (not that we actually would want to be seated amidst that bunch), our question to the Chairman would be simple: "Why raise given the Econ Baro's malaise?"

"Buy you can't argue with that amazing jobs report from last week, mmb..."

Try me, Squire. For in the week just past we found the Economic Barometer hit with slowing if not outright declines in Retail Sales, Housing Starts and Building Permits, the National Association of Home Builders Housing Market Index, prices for StateSide exports, the Philadelphia Fed's Business Outlook Survey, both wholesale and retail inflation, plus a backing up of Business Inventories. Start that new job and sit on your hands.

Neither let us overlook the stock market, for which our expectation remains firm for a 25% correction from the S&P 500's high of 2873 down to 2154. Be it from rising rates or stagflation shakes, unsupportive earnings remain our take. With Q4 Earnings Season behind us, our "live" reading of the median price/earnings ratio for the "S&P 456" (i.e. not including those constituents with trailing twelve-months losses) finished yesterday at 23.3x. Including the non-earners by simply applying their present stock price as their P/E ratio, (i.e. you're willing to pay something for something earning nothing), the live capitalization-weighted P/E is 56.4x. And as history always shows, that'll take its toll.

At present "for whom the bell tolls" --(John Donne, 1624), it tolls for thee, you precious metals, see? Indeed we so see by their 10-day Market Profiles, price buried well within for both Gold (below left) and Silver (below right). Fortunately, for Gold there are structural price supports at 1308 and 1299, (the latter would be a low for this young year); but 'tis harder to suss out similar support for Sister Silver such that she could succumb as a knife through butter down through the 15s into the upper 14s. Hence the phrase one would rather not complete: "Live by the volatility...":

Gold's Value per Dollar Debasement, (from our opening "Scoreboard"): 2780

Trading Support: none, per the Market Profile

In parting, we've these two observations:

¦ How outrageous 'tis that a bunch of cryptocrap dubs itself NEM, the very ticker symbol of the mightiest of the Gold miners, S&P 500 constituent Newmont Mining! Thank goodness 'tis only by coincidence, (we hope). "Coincheck", a January-hacked cryptocurrency exchange in Japan, just had to shell out ¥46.3 billion (some $440 million) in NEM customer compensation. Whatever happened to "Buyer beware!", eh?

¦ Been quelling that yearn to sojourn up to Yakutia? Despite it reportedly being -24°C there, quell no more! A Nimbus Airways Antonov An-12 cargo plane (en route to that favourite "go-to" destination of Krasnoyarsk) had on takeoff a door failure, causing diamonds, platinum and Gold amounting to around nine tons to litter the northeast end of Yakutsk Airport's runways 05/23. 'Tis said the booty in the blunder has a value approaching $400 million -- again by coincidence? That is right in the monetary neighbourhood of the aforementioned "Coincheck" hack. Either way, bring mittens.

Fed-ready we are, with Gold at least technically poised to cascade. But then, if not instead straightaway, to be saved by the dip buyers' brigade? Do us a favour, luv: avoid the Short trade; for 'tis from buying down here that Gold fortunes are made!