In looking back a week ago to "Gold's Narrow Trade; Beware a Cascade", price's since breaking away from such narrow trading range did come true -- right on cue -- and up price flew. As if 'twas foretold by the Sibyl, here's our updated view:

Such expansion of range was clearly due, but 'twas over direction that we did stew. Remember? "Up or down?" Gold was on a knife's edge at this time a week back, then priced at 1314 right where the dip buying brigade had time and again saved the day, but with the technical picture inferring "down" as the way. And to be sure, Gold began the week en route to nearly test the year's low (of 1304), reaching below 1307 pre-Fed decision. But then came the goods that give Gold the bids, all of which we can cluster together under the umbrella of the "U-word" -- Uncertainty, such as to include:

¦ The guidance from the Federal Open Market Committee for a further waxing of FedFunds rates this year, (this latest hike being into the 1.75%-2.00% target range), seemingly ... no, assuredly ... with a blind eye to the waning Economic Barometer (as we'll below see);

¦ The testy and twisty tactics of "don't touch me with your tariffs" talk ... "Dollar Down! Dollar Down!";

¦ The trillions of unfunded Dollars, in this case nearly one-and-a-half of 'em, added onto the Congressional spending stack;

¦ The fallout of the equities market, the S&P 500 in continuance of what we still see as a 25% correction from our 26 January "Blow-Off Top" at 2872 through the present 2588 level en route to 2154 this year. For as always, always, always (i.e. always3) has happened when the Index's price/earnings ratio is as ridiculously high as 'tis (our "live" reading at this writing being 53.0x), it ends badly.

And thus Gold posted its best weekly gain year-to-date by both points (+33) and percentage (+2.5%) in settling out the week yesterday (Friday) at 1347. That level is just 18 points below the year's high so far of 1365, and 30 points away from Base Camp 1377, above which we expect the BSR ("Buy Stops Riot") to further send Gold up to our conservative forecast high for this year at 1434. Need we say more?

More robust it indeed all appears in the picture of Gold's weekly bars, albeit not yet to the stars, but a little lift is always a gift: 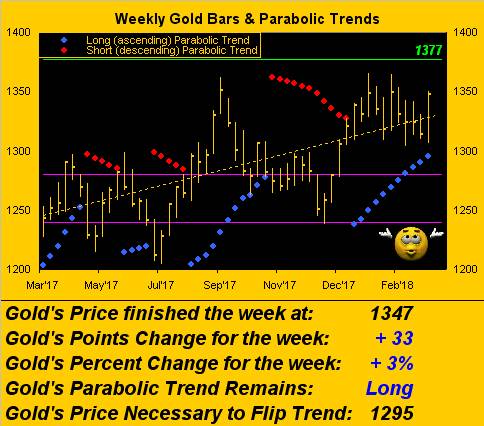 Now with respect to the aforementioned Economic Barometer as we below see: should it continue its malaise and yet Jay Powell and the FOMC still further rates raise, one might think of them as Jay & the Americans with their smash hit from '64 to "Come a little bit closer"toward pushing it all over the cliff. And whilst the Baro over time is more oscillative than purely directional, (i.e. it ebbs and flows as reported metrics rise and fall, then oft get revised, and as well are compared with what was "expected"), 'tis worth noting this past week that it did reach down to its lowest level since last November:

Obviously reaching back down as well was the S&P 500, starkly shown per the above graphic's red line. But with an eye to further downside caution comes this next view from the website of the S&P's cumulative points drop for the past week along with the moneyflow regressed into S&P points. And there we clearly see the "Uh-oh..." of more selling to go: the blue moneyflow line descended by 100 points more than did the S&P itself, (i.e. the institutions are getting out), leaving the bag holders to make up the downside difference. To be sure, nothing moves in a straight line, but history shows us 'tis generally the Index that succumbs to the level of the moneyflow, not the other way 'round, even should relief rallies and dead cat bounces intermittently abound:

Thus in bringing Gold back into the fold, here is its percentage track from a month ago-to-date (21 trading days) versus that for the S&P. 'Tis a foregone conclusion amongst the misinformed that Gold and the S&P generally move in opposite directions. (For example: on 31 July 2015, Gold settled at 1095 and the S&P at 2104. Now nearly three years later, both markets are up 23% at 1347 and 2588 respectively). Still when uncertainly is afoot, 'tis Gold that gets the bid as the S&P doth skid, and as below shown in this current case, Gold could use a little more upside alacrity, (think Base Camp 1377):

Next let's check Gold's whirl 'round technical picture in turning to the two-panel graphic of daily bars from three months ago-to-date on the left and the 10-day Market Profile on the right. And look at the baby blue dots: typically when reverting back up without having sunk below the -80% axis leads to higher price levels. Again: Base Camp 1377 here we come? So 'twould seem, the first overhead task being to exceed the previous double topping in the 1360s. Meanwhile, the Profile suggests Gold ought be firm above the heavily-traded 1326-1318 range:

Sister Silver's like graphic appears less robust and her trading range still quite narrow: nary a single trading pip has been outside of the 16s since 02 February, 35 trading days ago. And priced today at 16.56, the Gold/Silver ratio now stands at 81.4x (!):

Let's close it out for this week with a note on the also aforementioned Dollar. Its Index is presently 89.095 and as you'll recall, it recently -- and successfully -- twice tested structural support from as far back as both 2010 and 2009. But should this year's low of 88.150 go, 'twill be look out below, 84.965 being the next major structural support price. And you know what traders say about triple bottoms: "They're meant to be broken!" Not that you necessarily heard it here first ... but hang onto your Gold, else face being cursed!