As we put fingers to keys here in pre-dawn San Francisco, 'tis but some 10 hours since the US/UK/France surgically precise strike on chemical facilities in Syria. To what extent there is a Russia et alia response remains in the balance. The effect on Gold, be it bought, ignored or sold, we'll see when the new week unfolds.

'Course now we've had the "when" and early reports side toward mission accomplished. And if there's one thing we've time and again seen over the years 'tis Gold being bought on geo-political talk, but then returning back from whence it came upon the talk morphing into the walk.

Short-term, cue uncertainty and Gold flies; change the subject and Gold dies. But at the end of the long-term day, remember the 3-Ds: Debasement, Debt, Derivatives toward making Gold the ultimate prize.

Indeed, whether or not by surprise, this past week we saw Gold reach new highs ... at least for this year-to-date ... price reaching up to 1369 on the "Syria!" tweet, a mere eight points from the vaunted level of Base Camp 1377. However then came price's demise down to as low as 1336 on the "When?" tweet, the uncertainty buyers nonetheless racing in to save the week in settling Gold yesterday (Friday) at 1349 -- and as depicted in the weekly bars -- the parabolic Long trend of ascending blue dots being firmly maintained: 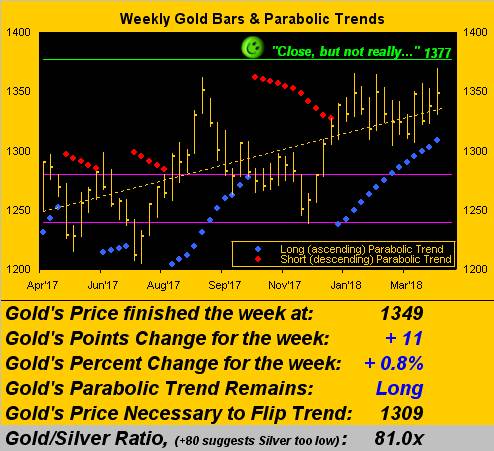 Noting that the Gold/Silver ratio is 81.0x, 'tis been above 80x for a millennium-to-date record 45 of the past 49 trading days -- i.e. since 02 February -- which was also the last date that Silver traded outside of the 16s. Call your local radio station for them to play as a Sister Silver dedication "Your Time Is Gonna Come"--(Led Zeppelin, '69).

Perhaps they ought also play Paul Simon's 1977 hit "Slip Slidin' Away"as is the Economic Barometer. One positive metric recorded during the past week was March's wholesale (PPI) inflation reading of +0.3% ... which could mean higher retail (CPI) inflation is en route ... but the latter came in with a deflationary reading of -0.1%. Growth in Import Prices slowed whilst Export Prices literally fell. Other negatives included Wholesale Inventories accumulation, Treasury Budget bloating and the University of Michigan's Consumer Sentiment Index returning below its "100" line-in-the-sand to 97. Ah, a slippery slope 'tis becoming for which the Federal Open Market Committee folks must deal -- or more conveniently ignore as oft seems their wont -- Chairman Powell saying just a week ago that economic growth has picked up enough to justify further interest rate hikes. You be the judge, ("Yikes!"):

As for the stock market, Q1 Earnings Season is barely underway. Specific to the S&P 500 (as depicted above in red), six of seven companies -- including some major banks -- have already reported better earnings over Q1 of year ago. And as you know, these are with the lowered corporate tax rate now in effect. Recall that once the S&P completes a 25% correction (down to 2154) we've "guesstimated" that such lower level combined with higher earnings would put the p/e ratio at a more reasonable 16.4x reading. But for the present, our "live" measure remains a dangerously high 53.1x.

"And people have to pay their income taxes by Tuesday, mmb..."

Good grief, Squire, where've you been? Clearing alpine roads in the Ligurian Apennines from avalanche debris, no doubt. But 'tis that dreaded time of year. Pull from the nest egg to "pay the man" nationwide, as well as in most states and at the sharp end of the tyrannical tip in some localities as well. We recently heard a chap on the radio exclaim about working 16-to-20 hours a day, in turn having to pay 50% of what he makes to the government, "and it's still not enough for them!" He ought try residing here in California: 'tis beyond diabolical.

Either way, if you have to pay, better to relinquish to the authorities faux dough (i.e. Dollars) rather than Gold, for which we next view its daily bars for the past three months on the left and its 10-day Market Profile on the right. The baby blues dots of linear regression trend consistency are nicely climbing out from their recent malaise, such that Base Camp 1377 is (for the billionth time) ripe for the taking, barring the Syrian strike being sold. Note in the Profile the support swath from 1348 down to 1337: that is the key area we'd like to see hold in the new week:

In the same graphic context here we've Sister Silver, her uncannily being stuck in the 16s standing stark. Still, similar to Gold's Market Profile, Silver's near-term support structure runs from 16.60 down to 16.40

All of which brings us to the Gold Stack, incorporating the year's new high at 1369:

Gold's Value per Dollar Debasement, (from our opening "Scoreboard"): 2780

In heading out for this week, we've these two quick hits:

¦ Having made mention of California, (wherein the highest marginal income tax rate of 13.3% combined with that of the 37% federal rate exceeds 50%), almost double the signatures required have been secured for a ballot issue to split the world's sixth largest economy (per Politifact) into three separate states. We may have a better idea, for the state on balance is a beautiful place, save for the endless concrete and cultural debauchery which emanates from Los Angeles and the filth and stench that pervades downtown San Francisco. Rather, we say keep the state as 'tis, but spin off LA and SF into private principalities under the respective governance of Princess Maxine and Princess Nancy. Perfect, eh? Yet sadly at the end of the day, 'tis all about maintaining that tax revenue, so don't look for seceding principalities any time soon.

¦ Squire's recent excursions in and around northern Italy's mountainous regions are not by chance. We think he came across an 1862 geological publication by one Bollettino del R. Comitato wherein 'tis stated that "...About 3,200 ounces of gold are annually produced from the auriferous pyrites of the Alps and the gold quartz of the Ligurian Apennines..." 'Course, that was way back then, but there also is the now: so regardless of where you might find it, get out there and grab some Gold! (Tweet dat!) 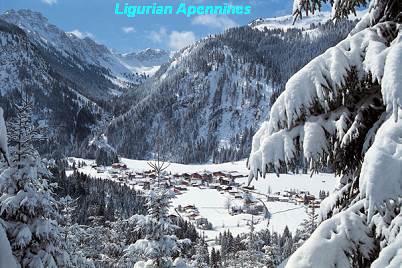