Have you seen the action in gold lately? It’s good. The action in miners is even better. The miners are no longer hitting the snooze button. They’re waking up, shaking off the cobwebs, and looking ready to seize the day. And that’s weird. Because the news for gold this week should have been B-A-D.

And the really good news is that now’s the time to get R-I-C-H!

Here’s the scenario. On Wednesday, gold was ready to break out to new highs for the year. But then the Federal Reserve released the minutes from its last meeting. And in there, the Fed hinted it would favor a more aggressive pace to rate hikes.

The market took this to mean potentially four rate hikes this year instead of three. Rate hikes are usually seen as bad for gold, because gold pays no interest. It’s actually more complicated than that, but I’m not going to drag you deep into the weeds talking about “real interest rates.”

Anyway, I’m talking about the short-term effect. The short-term was that gold gave up all its gains for the day. Then it dropped on Thursday. As one might expect. 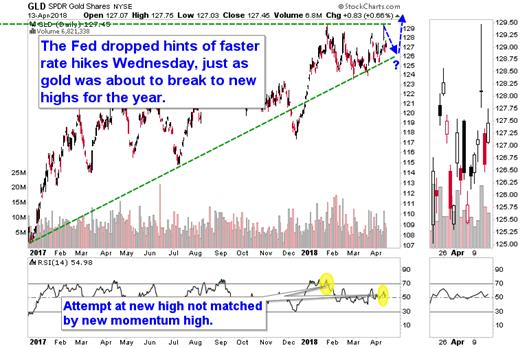 This is a chart of gold’s big uptrend. When gold finally breaks out through the top, it could climb fairly quickly after such a long consolidation. My target is $1,640.

But the Fed capped gold’s rally on Wednesday, right? In blue, I’ve marked where I think gold could go. It might tag its uptrend before heading higher to try and break out again.

You can also see that after falling on Thursday, gold rallied back on Friday (the yellow candlestick on the far right of the chart).

I can see another problem with the recent rally. Momentum did not back up the push to the new high. This tells us there might be more work to do.

This is a chart of the ounces held in the world’s physical gold and silver ETFs. You can see the gold held by investors is climbing. And silver? Look at the last week. It’s a moonshot!

So why are investors charging into metal?

There are multiple reasons for gold to start hot-footing it. But today, let’s focus on the trade dispute with China.

Remember how fears of a trade war faded after China’s President Xi made some soothing statements? Well, there are still serious problems.

It could get worse before it gets better. You know who believes that? Chinese investors. They’re the ones who are piling in, and driving ETF holdings higher.

This chart from Bloomberg shows the story … 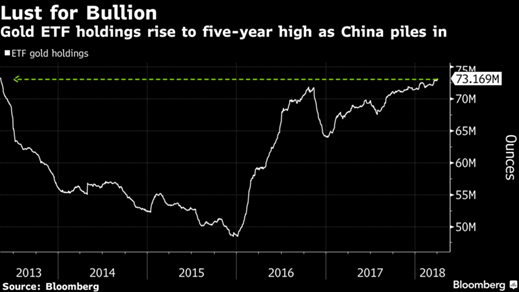 The Chinese aren’t alone. In Germany, in the Middle East, in other parts of the world, investors are buying gold. In fact, holdings in all bullion-backed ETFs rose to the highest level since 2013, according to Bloomberg data.

So, demand is hot-hot-hot!

What about supply? Well, we suffered through a five-year-long bear market in gold. It’s over now, but when prices were low, companies didn’t look for more gold. And gold is a depreciating resource – deposits get used up.

In fact, according to the World Gold Council, new mine starts in recent years have mostly served to fill the gap left by production losses elsewhere. That has led to a plateau in global gold output.

Add in declining mine grades, and the fact that it’s easier to make money in just about any other business before gold mining. And it’s likely the next move in global gold production is down, not up.

So, we’ve got a good ol’-fashioned supply/demand squeeze.

Get Your Mining Picks Ready!

The big question is, how can you make money on this?

I’ll give you two ideas. They’re in this chart of the last two weeks’ action in gold and miners. 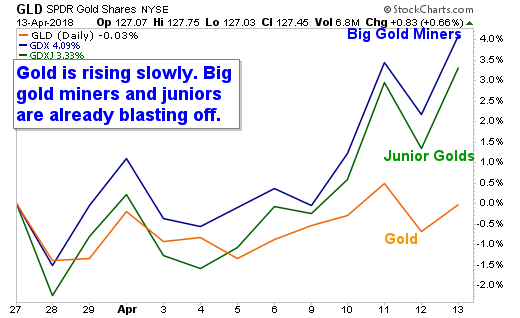 You can see that gold has barely trended higher in the past two weeks. But miners are outperforming. That’s textbook for a gold rally.

Big miners as tracked by the VanEck Vectors Gold Miners ETF (NYSE: GDX) are leveraged to the price of the metal. They’re up big. That’s the blue line.

The green line is the VanEck Vectors Junior Gold Miners ETF (NYSE: GDXJ). They’re lagging the big miners a bit … for now. That’s textbook in the early stages of a gold rally. Later in the rally, the juniors will lead the way.

You can buy the big miners … or buy the junior miners … or buy both. Sure, do your own due diligence. But don’t wait too long. That breakout in gold is coming. And it will send mining shares ballistic.