Now before we get into it, did ya happen to notice that S&P/Experian's consumer credit compilation just recorded its highest pace of credit card defaults since July 2012, indeed up for the fourth straight month? "Gee, Gerty, I didn't see that on the news!" And note how 'tis coincident with the Fed having raised rates? You heard it first foretold here so many months ago. Good to have some Gold given the Great Unraveling, non?

Give that man Squire an "Attaboy!" along with an all expense-paid weekend trip to fabulous Fresno, where he'll arrive in style by Greyhound at the Deluxe Motor Inn. (We aims to please).

"Thanks, mmb, but I'm gonna be road-testing the new Portofino up to the Ritz in Northstar."

Hard to keep pace with the lad's peregrinations, but he is spot on. Silver -- after having been entirely entrapped within the 16s for 50 full consecutive trading days (from 05 February through 17 April) -- saw someone gut it up on Wednesday to hit the offer at 17 and "Bang!": within three hours price had moved to as high as 17.265, indeed reaching up to 17.360 on Thursday, before settling out the week yesterday (Friday) at 17.115. That's the Good News.

Now for the Not As Good News: Silver's upside kick wasn't due a lick to her comparative undervaluation with Gold. Her precious metal pinstripes left hanging in the closet, Sister Silver instead -- fully adorned in her industrial metal jacket -- was taken for a joy-ride by Cousin Copper along with his back alley party buddies iron ore, nickel, aluminum, and ('tis rumoured) every fraud's Gold-bar-filler-favourite, tungsten. Not a very impressive binge, that. Blame it all on talk of $100 Oil? (Thank goodness for StateSide energy independence, so they say).

Either way, Silver's having gained 2.8% for the week combined with Gold's having lost 0.8% was enough to finally send the Gold/Silver ratio sub-80 to 78.2x. But given Oil's having finished out the week with two daily declines such as to look technically-toppy near-term, should the industrial metals gang recede from their recent ride, one ought expect sister Silver, too, to slide, only to again find herself inside ... the 16s. Say it ain't so. Instead, 'twould be helpful for Gold to get off the schneid. Still, at least to visually memorialize Silver's enthusiastically having broken above 17, here we've her percentage track over the past 21 trading days (one month) versus that of snoozing Gold:

Meanwhile with Gold all but settling on its low trade of the week at 1338, in turning to the weekly bars, we see price smack on the dashed regression uptrend line. The parabolic trend remains Long and the 25-points of wiggle room down to the 1313 flip level is within the "expected weekly trading range" of 32 points. The yellow metal thus needs to firm here, else face being flipped to Short, which in turn would not bode well for the white metal, making short-lived her binging in the 17s:

To further put Silver's out-performance for the present in perspective we next go to our side-by-side views across the last three months of daily bars for Gold on the left and Silver on the right. Gold's "Baby Blues" of 21-day linear regression trend consistency have turned southward whilst those for Silver continue to track northward, (again, for the present). Indeed through the girth of Silver's panel you can see price's entire entrapment of 50 days in the 16s, (the third rightmost bar being Wednesday's enthusiastic "Bang!" whilst Gold instead snoozely rolled over):

Rolling over as well through much of this year's first quadmester are both the Economic Barometer and the stock market, (the latter of which we still believe has embarked on a 25% correction as measured by the S&P 500 from 2872 eventually down to 2154). Still, incoming data this past week was on balance positive for the Econ Baro with improved reports for Housing Starts, Building Permits, Retail Sales, Industrial Production and the Philly Fed Index; however, weakness or slowing was found in the New York State Empire Index, The National Association of Home Builders' own indicators, Capacity Utilization, and the always lagging report (which the Baro generally foretells by a month) of Leading Indicators. Here's the picture:

And specific to stocks, everyone's all excited and jumping up and down about this Q1 Earnings Season. With 56 of the S&P 500 companies having thus far reported, 54 of them (96%) have bettered their Q1 of a year ago, and rightly so by the corporate income tax rate having been reduced from 35% to 21%; (mathematical science works). The sad, dirty little secret remains that the actual level of earnings continues to be unsupportably low: the average "live" price/earnings ratio of just the stalwart Top Ten capitalization-weighted stocks in the S&P is 77.2x; to center in a bit better, the median P/E ratio for the Top Ten is 35.5x. Did we mention the 25% correction as being in play? Moreover (or lower), the financial world's own answer to Yul Brenner -- Mark Mobius -- is calling for a 30% correction. Look as always for the truth to will out, what?

And through it all, the Dollar Index has quietly climbed back above 90. Who knew?

Gold, for one, knew, its not having participated in the industrial metals' joyride. We again see it here in the 10-day Market Profiles for Gold (left) and Silver (right), the white bar in each panel being Friday's settles. Indeed for the past fortnight, Gold is unchanged, but Silver has a 4.6% gain:

Still near-term, should Gold continue to stumble, Sister Silver most certainly ought take a tumble. The two metals' respective percentage amplitude of movement varies from one another to be sure, but 'tis rare that their prices directionally wander away from one another. Thus as we on occasion quip, a word to the wise is sufficient.

Speaking of wisdom, we are completely lacking that when it comes to this whole cryptocurrencies and blockchain bit: don't understand it a wit! To the point, 'tis hard for us fathom something which is nothing. And yet we read this past week of International Monetary Fund Managing Director Christine Lagarde seeing a more prominent road-map for the crap. Oh-là-là-là, chère Christine!

But wait, there's more: five youthful lads over in our beloved Monaco are introducing to the Principality their "Monoeci". Oh no. They say theirs will be "...a true, everyday-life currency ... to be accepted for all transactions within the Principality, from shopping to buying a car or an apartment ... [whilst enabling] a trustful relationship with the Principality and the government’s officials, so that we can grow respecting its political and reglementary landscape..." I think this warrants yours truly getting over there such as to fully assess this situation. On verra.

Meanwhile off goes Squire in the Ferrari Portofino; at least he opted for Silver: 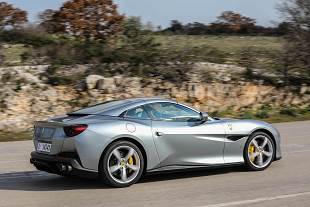