Ever since gold broke below $1,300, exactly a week ago today, pricing has remained in an extremely narrow and defined trading range. The relationship between the daily open and closing price has diminished to just a couple of dollars each day. Although prices have dipped below a critical support level (0.618 % retracement) at $1,288, gold has effectively closed above that price point on all occasions.

If these lows hold, it will mark the fourth instance of gold trading to a higher low since the end of 2015. At that time, gold hit its lowest price point and concluded the multiyear correction which began at $1,900 per ounce.

The first instance of a higher low occurred $1,125 in December 2016. This low concluded a correction which began in August 2016 when gold prices hit an apex just above $1,375 per ounce. This price high continues to be the unobtainable brass ring. 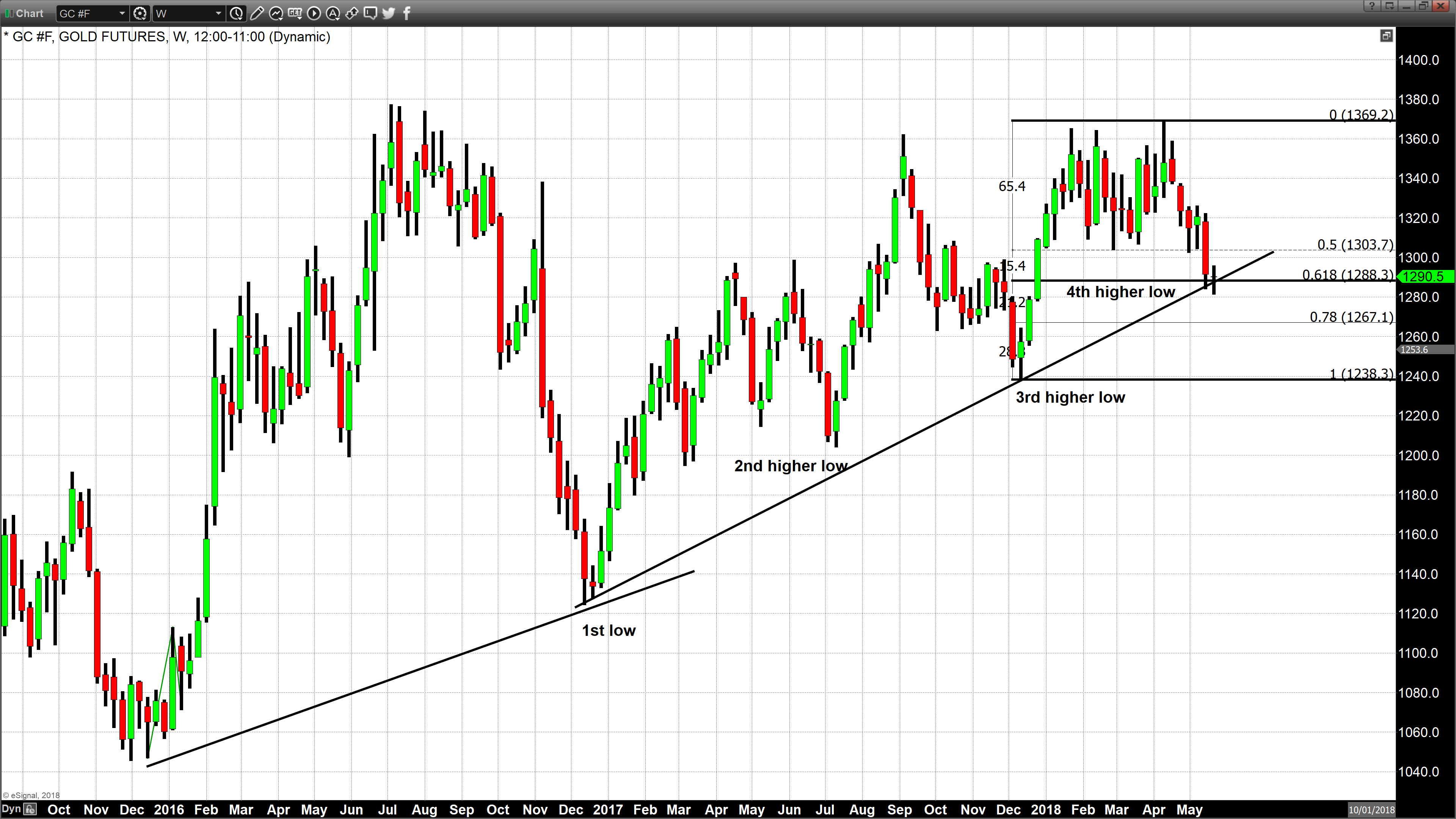 The second instance occurred at $1,205, ending a short correction, just prior to the first attempt to breach absolute resistance. Gold prices reached an apex of $1,361 before trading lower.

The third instance of a higher low occurred in January of this year with gold trading to a low of $1,238 per ounce. Again, this low occurred just prior to another attempt at taking out the former high, and on this occasion traded to a high of $1,366.

If these lows hold it will be the fourth occurrence of a higher low. However, what is lacking is a series of higher highs which have been completely absent since the first high achieved immediately following the conclusion of the multiyear correction.

Technically speaking, even if gold pricing continues to erode, unless pricing breaches $1,238 gold will still have maintained a series of higher lows throughout this timeline. While the series of consecutive higher lows is very bullish long-term, the flattop and clearly defined absolute resistance just above $1,370 must be taken out to complete a bullish timeline.

This year alone there have been three attempts to challenge these absolute highs, with each occurrence failing to trade to a higher high successfully. The last failed attempt occurred on April 9 and was truly the closest gold pricing has come to the highs achieved during 2016, trading to $1,369 before beginning the current correction.

While it is clear that the series of higher lows confirm that the multiyear correction ended in December 2015, there is still an absence of higher highs. Until gold is able to breach the long-standing resistance at $1,370 per ounce, all we can say that gold is no longer in a corrective mode. However, gold pricing must breach this major resistance before we can confirm that gold is in a bullish time cycle.