Precious metal Gold has precious little support left to save its year. Having settled the week yesterday (Friday) at 1254, price traded down through most of The Box (1280-1240), reaching as low as 1247.

Our present sense is should Gold post a weekly close sub-1240, 'twill be well en route to putting in a down year, barring (to quote from the "The Eiger Sanction" Clint Eastwood): "...something massive, something massive..." happening to spur price back up.

In fact, you wanna talk about crazy? Within the past two weeks from 15 June through 26 June (eight trading days):

This is inexplicably unexplainable.

In fact, so miserable has become the yellow metal's negativity in spite of the normally Gold-Positive moves from the above markets, (not to mention the "3Ds" of Debasement, Debt and Derivatives), that now we're seeing Gold falling even as the stock market falls. No safe haven flight from there to Gold. To wit, here is its percentage track vs. that of the S&P 500 for the past 21 trading days (one month):

And when we view the daily bars for all eight BEGOS Markets components from a month ago-to-date, -- along with their "Baby Blues" showing the consistency of each market's linear regression trendline -- we've Gold winning the Ugly Dog Contest: 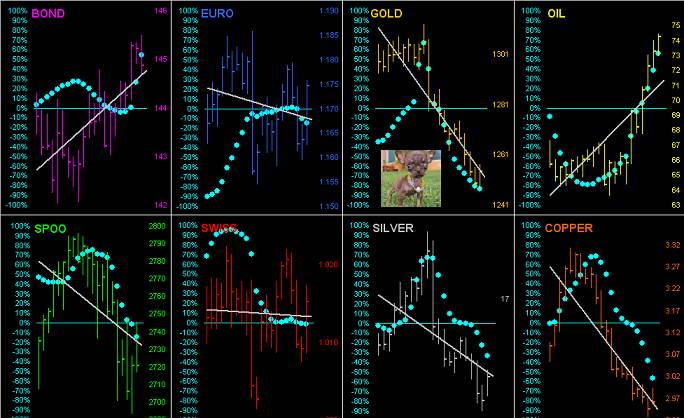 Naturally, the result of it all is Gold's having traded well down into The Box (1280-1240) as we next see here across the weekly bars from a year ago-to-date, the red dots of parabolic Short trend stretching to accelerate Gold's downside fate. 'Tis time to stop tapping the brakes and instead stand on them! Do, or die, what?

Year-over-year as well we've the following percentage performance tracks for Gold, +0.7%, and these key precious metals equities: Newmont Mining (NEM) +17.0%, Goldcorp (GG) +5.7%, the VanEck Vectors Gold Miners exchange-traded fund (GDX) +1.6%, Franco-Nevada (FNV) +0.9%, and lacking any and all respect the Global X Silver Miners exchange-traded fund (SIL) -14.4%. And note therein the rightmost up-blips in the equities without Gold itself participating. Did we mention this is inexplicably unexplainable?

As for some rightmost down-blips, let's next turn to the Economic Barometer as charted from a year ago-to-date along with the S&P 500. Despite hearing day-in and day-out that "Everything's Great!", at the very least, the Baro has hit a bump in the road. Q1 Gross Domestic Product, originally stated on 27 April as having grown at a 2.3% annual pace, was then revised down a pip on 30 May to 2.2%, and then boffed lower again this past week to 2.0%. Personal Spending slowed from a 0.5% pace in April to just 0.2% for May, albeit Personal Income's pace did rise from 0.2% to 0.4%...

"Well then people must be saving, mmb..."

...oh do come along, Squire. Unlike you, we're not all cash machines. Moreover, the Conference Board's Consumer Confidence Index posted for June its second largest monthly drop in a year. Factor in too the S&P's continuing, (albeit still "stealth"), 25% correction targeting 2154, and here's the picture:

Neither overlook from the "They're Just Figuring This Out Now? Dept." this shock headline of the week that, according to the Congressional Budget Office: "Ballooning National Debt Could Hurt US Economy, Increase Likelihood of Crisis" We know that: we've known that for years.

Sadly what we've also come to know for far too many years is that Gold likes to sit in The Box (1280-1240). It again has been the dominant trading area these past two weeks, made all too clear as we go to the 10-day Market Profiles for Gold on the left and Silver on the right. And were we to turn the latter's profile upright, one might daresay at 16.40 she's giving us "the finger". Really, Sister Silver...

Still, with respect to Silver's declining Moneyflow measure which we herein charted a week ago, price did succumb to the Market Rhythm Target of 15.89: so if you gutted it up to Short it down, yer buyin' drinks all 'round.

To wind it all down, 'tis not the happiest of times for Gold, which now fragilely sits just above the base of The Box. Again, we view The Whiny 1290s down through The Box to 1240 as a critical, 50-point wide support barrier for Gold through which not to entirely fall. But if it does, then that barrier morphs into one of resistance and, in turn, the year is lost -- as would obviously be our forecast high of 1434 -- only adding to the party animal's delight below lower right as we close with the Gold Structure: 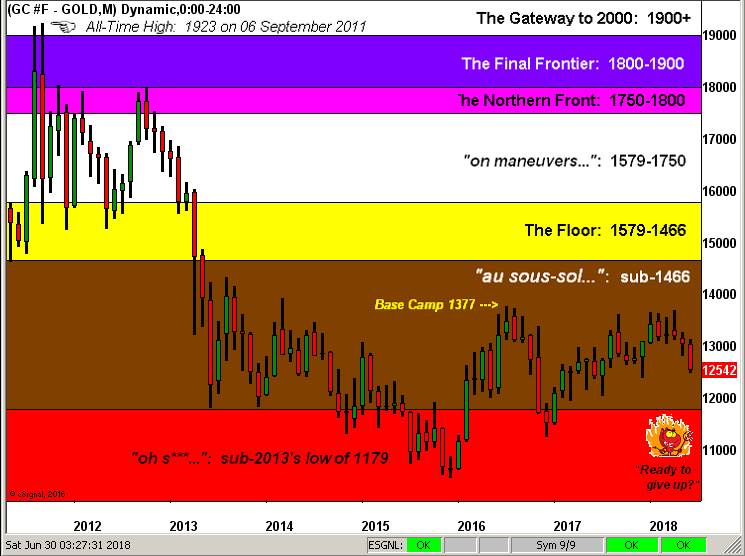 Time for Gold to hold .. and for us to hold Gold! 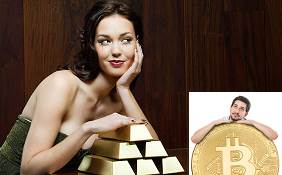