Gold: What Would Patton Do?

There are many words investors might use to describe the current gold market; most of them are unprintable. But I have one word that should describe gold investors now. At least, those investors who want to make money. And that word is “audacious.”

Be bold! Dare to go where others fear to tread. It raises your risks. But it also greatly raises your odds of making money.

Remember that motto. And at the end of this article, I’ll give you three ways to play this market like Patton. All gold producers. All trading at huge discounts. All waiting for investors with steel in their spines to scoop them up and ride the next rally.

Many people will tell you that gold is only bouncing a little before tumbling ever deeper into the Well of Tears. Sure. They may be right.

But I believe we are instead looking at a tradeable bottom in gold and miners.

I’m not saying this is THE bottom. But it’s a tradeable one. And we want to own a stock that is leveraged to the bounce.

Why is gold bouncing? Because the U.S. and China have agreed to hold low-level trade talks aimed at defusing the escalating rounds of tariffs. As I explained in my weekend column at the Edelson Institute, “How to Reap a Bumper Crop of Profits,” I believe that optimism may be misplaced. But in the short-term, this could be quite the tailwind for stocks.

I’ve also recently laid out a bullish case for gold, in my articles “Is Gold Still a Safe Haven” and “Get Ready to Catch Those Falling Golden Turkeys.” In those articles I gave you loads of charts and statistics showing why the yellow metal is near a bottom. So, I won’t belabor the point.

I will show you two more charts. Both sentiment indicators. Both showing that anyone who wants to sell has done so. And that leaves the path clear for a massive, face-ripping rally.

Investors who buy gold through exchange-traded funds have given up. Holdings in bullion-backed ETFs tracked by Bloomberg have fallen 13 weeks straight. That’s the longest bearish run since August 2013.

There’s bearish. And then there’s General Ivan leading the Bear Cavalry bearishness. I think we know what we’re looking at here. Something like these cards from one of my favorite games, “Smash Up”:

We’re talking about a mood of ultimate bearishness. And it’s not just retail investors. Look at this chart of hedge fund bets on gold … 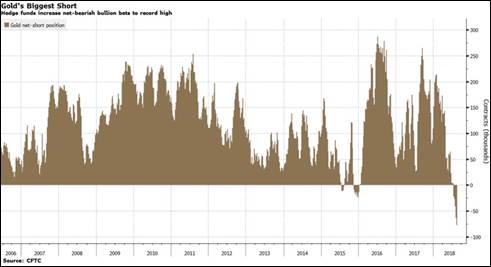 In the week to August 14 – the latest data available – hedge funds and other large speculators increased their net short bets on gold. In fact, they raised those bearish bets to the most since at least 2006.

That helped drive gold to a 19-month low last week. But it also laid the groundwork for an incredibly bullish rally.

Why? Because there’s no one left to sell. This is so bearish you could put a ranger’s hat on it and call it Smokey. More importantly, this is so bearish, it’s much easier for the market to go up than down.

YOU shouldn’t be satisfied with fine, ding-blast it!

So, consider these three gold miners’ trading near 52-week lows. Not explorers. Not developers. Gold MINERS. Gold miners priced like they suddenly ran out of gold. 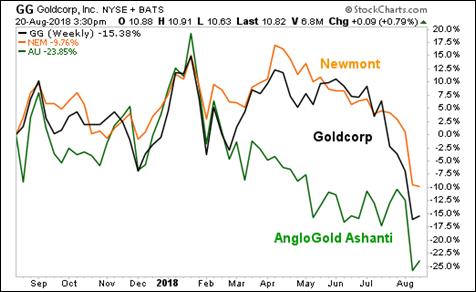 Holy motherload! Look at the right-and side of that chart. These stocks are getting pushed off a cliff!

AngloGold Ashanti carries more risk because it’s a South African miner, sure. But it’s going to produce 3.3 million to 3.5 million ounces of gold this year. And its all-in sustaining cost (AISC) will be between $990 to $1,060 per ounce. What the heck is wrong with that?

Meanwhile, Newmont and Goldcorp are getting beaten like red-headed stepchildren, and they’re both mining blue-bloods.

Goldcorp produces 2.5 million ounces of gold annually. The Canadian miner expects an AISC of $760 to $840 per ounce.

And Newmont, for Pete’s sake, is going to produce of 4.9 million to 5.4 million ounces of gold this year. And at an average AISC of $995 per ounce.

I think Patton would have some choice words for that kind of opportunity.

I’m not waiting. I’m moving my subscribers into choice gold miner picks. You can do what you want. But there is money sitting on the table, waiting for investors to grow steel in their spines. Sure, there’s risk, too. But oh, baby, the potential rewards.

Prices may zig and zag from here. But remember, “audens, audens.” Man, what an opportunity.