Last week, we said that the consensus is that gold must go down (as measured in terms of the unstable dollar) and then will rocket higher. We suggested that if everyone expects an outcome in the market, the outcome is likely not to turn out that way. We also said that this time, there is likely less leverage employed to buy gold and that gold is less leveraged as well. And this, combined with a contrarian perspective on the consensus view, means that this time gold won’t go down before going up.

Dan Oliver of Myrmikan Capital emailed Keith to say that people in the third world use gold as collateral on their loans. When they can’t repay, the gold collateral is sold by the creditors. This time around, there is likely to be a larger crisis in the so-called emerging markets and their currencies, and hence this selling of gold will be a bigger factor. With greater selling pressure on gold, we’re back to the bearish case.

The bottom line is that we have several forces pushing gold up, and several pushing it down. On the up side (not upside, sorry we couldn’t resist) these include creditors rightly fearing dreadful losses when debtors default, speculators wrongly thinking that an increase in the quantity of dollars causes gold to go up, and even the possible path to remonetizing gold if we are successful in help Nevada to issue a gold bond. On the downside, we have speculators who front-run the consensus that gold must go down first in a crisis, and we have forced selling by leveraged gold holders in the first and third worlds.

Think of the plight of those poor third-world people. No one in his right mind would keep his wealth in rupees, lira, bolivars, or whatevars. So they buy gold for savings. Also because these currencies fall so much, they like to borrow them, and count on the currency going down, so they can repay in cheaper units. Except in a credit crunch. Even if their local whatevar is falling, that does not necessarily help a borrower earn some whatevars to repay his loan. It is possible for the whatevar to fall against the dollar, but at the same time rise against the internal markets for real estate and food.

In the first world, the currency has been made irredeemable. That is, to own what’s called money, you are actually a creditor. The currency is targeted for 2% losses per year, so people are forced to seek whatever asset is going up. They engage in a process of conversion of one’s wealth to another’s income.

Deprived of interest, they each seek to increase their own purchasing power. That is, they seek to get something for nothing. But there is a problem. This is only possible, if someone else gets nothing for something (it will not remain the first world if the perverse incentives that cause this perverse outcome remains in force).

Gold in the Third World

In the third world, the currency does not fall at a mere 2% per year. It falls faster, and there can be utter collapses, like the Zimbabwe or Venezuelan toilet paper currencies. Or it can have sudden crashes like the Turkish lira, On July 23, the lira was over $0.21. By August 13—just three weeks later—it had dropped to under $0.14. It lost more than one third.

So the locals buy gold, which is a lossy transaction. They buy at the offer price, and when they sell, they must take the bid price. For this reason, and because the lira is unstable, they use their gold as collateral. Borrowing against gold avoids that loss due to the bid-ask spread. However, it puts their gold at risk. If they cannot sell their products and make money whatevars, then they lose their gold.

Most people believe that we have free markets. We don’t. We have a monetary system gone mad, under the abuse of pervasive government interference.

However people accept the idea of so-called floating currency exchange rates as the very foundation of capitalism. It is true that people can buy and sell the major currencies freely (except for the ones with capital controls, e.g. yuan). However, these currencies and this so-called floating regime, are artificial and unnecessary. A free market is not when people are forced to use government debt paper—but hey, at least they can find a bid for that paper 24 hours a day.

We are painting a picture of a sewer, endlessly churning up cloudy water with floating brown pieces, disturbed by unpredictable but frequent deluges of fresh credit-effluent. And each country has its own sewer. Some are less muddy, others are more putrid. All have their own rates of churn and effluent flows.

Worse, people who were born and lived their whole lives in these polluted ponds take it as right as rain. They feel that this is normal. They accept monetary relativity, measuring each failing currency only in terms of other failing currencies or in consumer prices. Never do they dare measure paper credit by using the objective standard, gold.

Of course, if a currency is irredeemable then there is no way to extinguish any debt and total debt rises exponentially. Of course, if a currency is falling then everyone must seek to speculate for gains, to seek something for nothing. Which means others get nothing for something. Rising debt combined with conversion of one party’s wealth to another’s income, to be consumed—that is capital consumption.

Exponentially rising debt plus falling real capital is a formula for booms and busts. Everyone loves the euphoria of the boom. But of course then the bust comes.

Traders know that the bust comes, but no one (not even the PhD economists who run the credit-effluent pumping stations) knows when. So traders sometimes go long, and other times go short. They are always looking to bet on a price move, that is, to increase their purchasing power, that is, to get something for nothing. The good ones achieve their goal. Others get nothing for something.

And then the bust comes. As Keynes knew well, “while the process impoverishes many, it actually enriches some.”

Some economists still assert the so called efficient markets hypothesis. They believe that asset prices fully reflect all available information. It should be called magical thinking about markets! The monetary system creates a contradiction between the perverse incentive to borrow falling currencies to buy assets, and the suddenly collapses of asset prices when the borrowing gravy train crashes.

In other words, which group is correct? One group buys gold thinking it’s better to own money than to be a creditor at the peak of the biggest borrowing binge in human history. The other sells gold, thinking that central bank credit slips will go up in the debtor’s crunch.

There is nothing efficient about this. And although information is available, there is no convergence process by which people arrive at the right price. A quick glance at the price of anything shows this to be true.

Meanwhile, we have endless debates about how capitalism caused the crisis of 2008, and how additional government controls will somehow prevent the next crisis. And we debate if the current president is somehow creating prosperity, ignoring that a debt-fueled boom is not prosperity and the president has little effect on the boom-bust cycle.

Anyways, this is not capitalism. It is not a free market. It is an unstable mix, and it will either be resolved by transitioning to a free market or to dictatorship. Sadly, most places during most periods of history have chosen dictatorship.

Is it better to own gold than paper in an incipient dictatorship? Maybe. If it avails you.

We would rather transition to a free market. In fact, we are working on that transition. We have been working with the state of Nevada, and now they have pending legislation to issue a gold bond. The gold bond is the key to a working gold standard. Interest is the one force that can pull gold out of hoarding and into the market. And now, for the first time in 85 years, America could have gold bonds. This is a giant step toward the gold standard.

Keith has put up a petition, and is asking for everyone who cares about honest money to show Nevada that you support their move to gold bonds. Please click here for the petition at Change.org.

Of course, we are not going to bias our discussions of the fundamentals, based on bearish or bullish theory. Let’s take a look at the supply and demand fundamentals of both metals. But first, here is the chart of the prices of gold and silver. 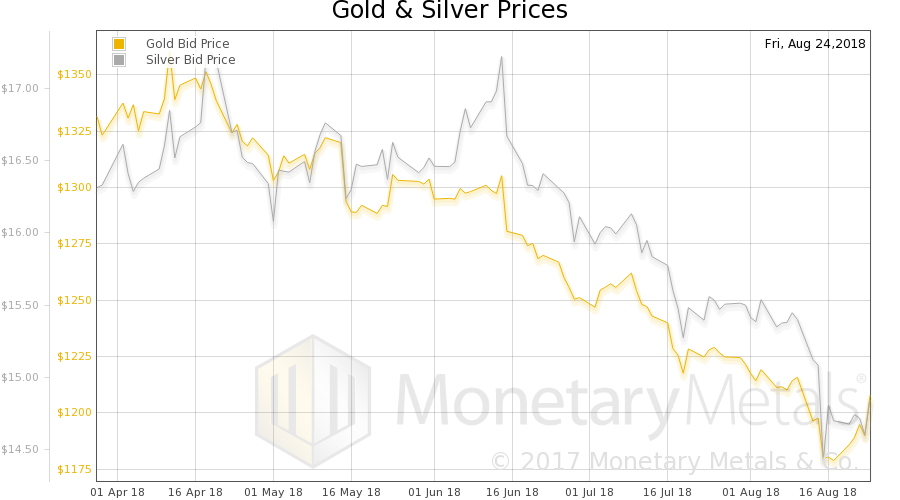 Next, this is a graph of the gold price measured in silver, otherwise known as the gold to silver ratio (see here for an explanation of bid and offer prices for the ratio). It rose again this week. 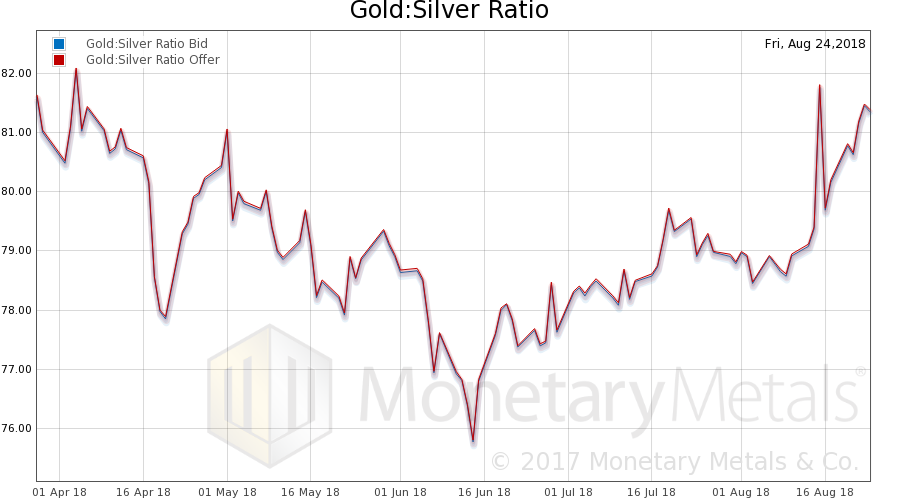 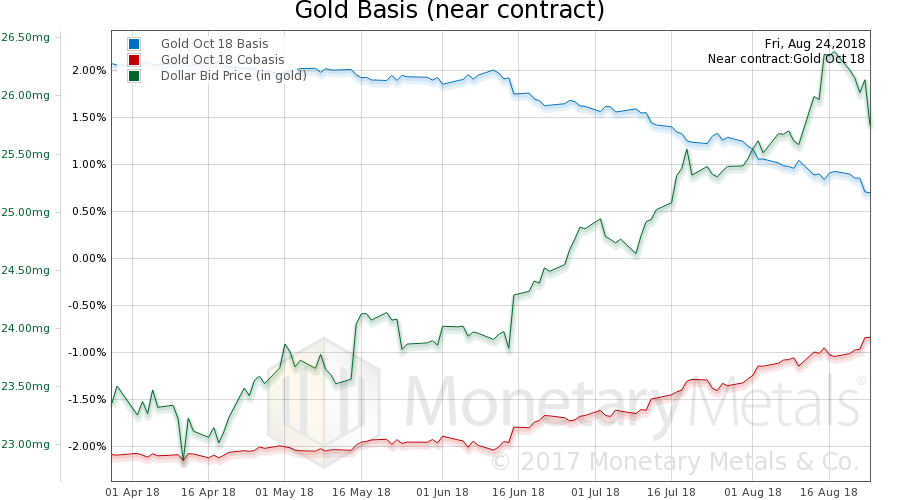 It is notable that even with the dollar moving down (which most people miscall gold moving up) gold becomes scarcer. The cobasis (our measure of scarcity) is up about 20bps. It is odd that the father-out contracts did not move, with the gold cobasis continuous unchanged. 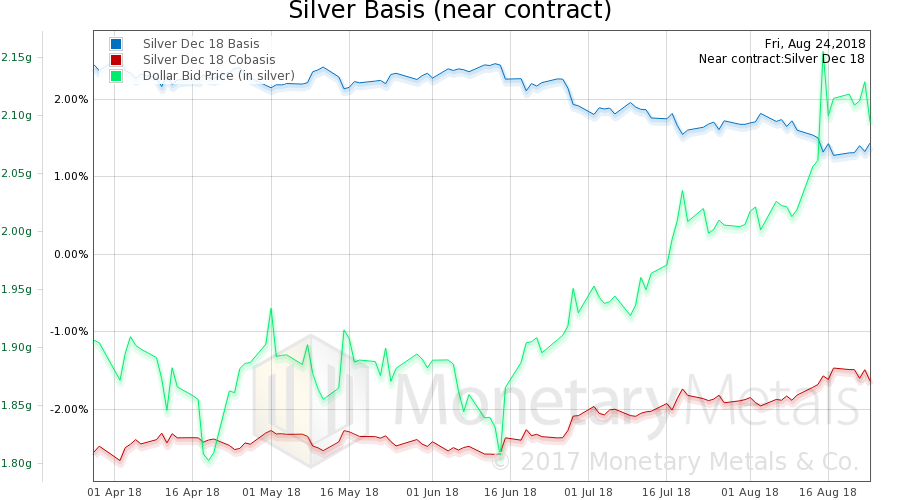 The picture in silver was a bit different. With the price not moving, we see the scarcity falling. The same occurs in the farther contracts, and the silver cobasis continuous.

The Monetary Metals Silver Fundamental Price fell 41 more cents, from $16.19 to $15.78. Silver not only has a more volatile price, it has more volatile fundamentals. Remember, the fundamental price is just a calculation of what price would clear metal if the impact of the futures speculators were backed out of the market.

It fell quite a bit, but it’s still a buck over market.