I want to give you a heads-up on a profit opportunity like few you’ve ever seen. I’m talking about the coming face-ripper rally in silver.

The market hates silver right now. It hates it even more than gold, and gold is getting about as much respect as a Baby Daddy with three wives on the Jerry Springer show. But let me tell you: Silver is poised to rocket.

And I’ll prove it to you in one chart. A chart of the gold-silver ratio. That’s simply a chart of how expensive gold is compared to silver. And it’s at a screaming, four-alarm level now. 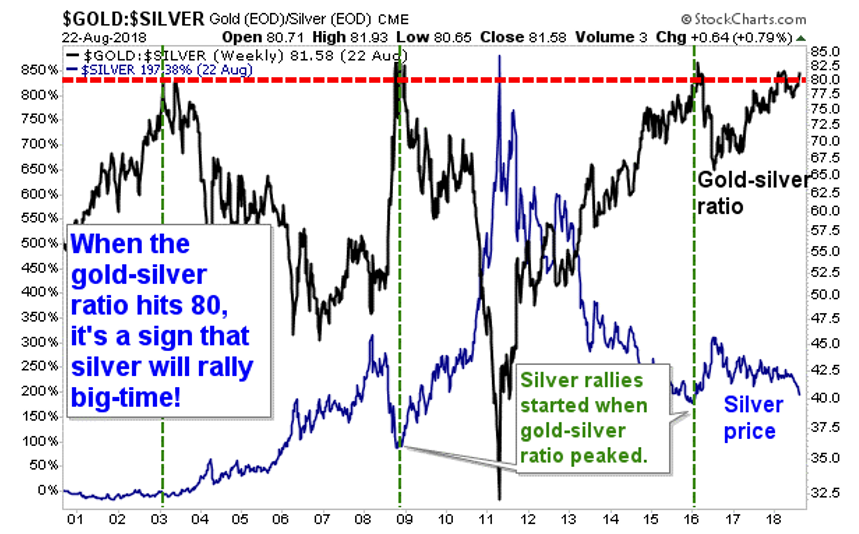 As you can see from the chart, it takes 81.03 ounces of silver to buy one ounce of gold. In the past, when this ratio hits 80, that’s a sign that it is about to reverse.

No, I believe the way this ratio will come down is by silver blasting off. I’ve marked with green dotted lines the start of three previous big silver rallies. Each one occurred shortly after the gold-silver ratio peaked.

In fact, if we jump into the wayback machine, statistics show us that going back to 1996, silver prices climbed 7.3 percent on average in just three months after the gold-silver ratio exceeded 80. And as you can see, sometimes it’s quite a bit more.

And it can also spark a rally that can go on for a lot longer, and higher, too.

To be sure, gold will also go higher. Just not as fast as silver. Silver is the drama queen of precious metals. When gold is up, silver dances its way up the stairs. When gold is down, silver slumps to the floor.

For the past few months, gold and silver have been the market’s floor-mats. But that should change. And change soon.

Both precious metals are facing supply-demand squeezes. But in silver’s case, it could be particularly tight.

CPM Group’s 2018 Silver Yearbook tell us that silver fabrication demand continues to ramp up. Silver is used for everything from silverware to jewelry, coins, and chemical reagents. But demand for silver in the solar industry is shifting into higher gear.

Demand for silver in solar panels rose 23.1 percent in 2017, to 106 million ounces. That’s more than a tenth of all silver supply!

Meanwhile, supply from mines is dropping. It dropped 3.3 percent in 2017, and is projected to fall again this year. And no wonder. With prices at recent levels, who the heck wants to start a new silver mine?

I recently wrote a series of articles outlining the bullish case for gold. “Is Gold Still a Safe Haven,” “Get Ready to Catch Those Falling Golden Turkeys,” and “Gold: What Would Patton Do.”

Well, let me tell you, as bullish as the picture looks for gold, the outlook for silver shines even brighter.

You can consider playing this with miners. Those leveraged to the silver price. After all, as silver climbs from rock-bottom levels, the profit margins of select companies will widen like the Grand Canyon.

Or, you can just buy an ETF, a basket of silver miners. Like the Global X silver Miners ETF (NYSE: SIL). It’s been beaten down with a miners’ shovel. Its next rally could be more than a face-ripper. It could be worthy of a moon rocket.