Gold Through the Eyes of Swiss Cheese

To open on a "yours truly" note, there was Switzerland long before Monaco entered our lives. 'Tis just that the latter's climate, locale and cosmopolitan culture supplanted for us that of the former's stoicity, moreover near-reverent sanctuary of logic and exquisite timing. But with "family" on the must-visit list and thus having come yesterday (Friday) up to CH following a stint down in MC, the Swiss efficiency of it all is remindfully stunning. One experiences it immediately, for example, as the airport "wifi gratuit" at ZRH blows the doors off of our otherwise all-ultra-powerful broadband copper cable Internet delivery system through which we analyze, correspond and trade back in San Francisco.

Now if only Gold were to return to the similarly once-efficient nature of increasing its market value astride the non-stop growth in the StateSide money supply (M2) -- such debasement in tow with skyrocketing debt and derivatives -- we'd have the whole package ... or at least a present Gold price per the above Scoreboard in excess of 2800 rather than seeing the past week settle at 1196. For through the eyes of Swiss cheese, Gold's present-day valuation is riddled with holes.

In any case, the unavoidable annoyance of the market's never being wrong, the ninth trading month of 2018 has come to an end such that 'tis time to bring up the usual cavalcade of colourful -- albeit factually dour -- Gold & Co. graphics.

Let's begin with Gold's weekly bars from a year ago-to-date ... and frustrating indeed remains their state. With but 27 points separating present price (1196) from the trip price (1169) to send the parabolic trend back to Short with essentially no price gain from the Long side, 'tis a somewhat precarious picture. Given Gold's "expected weekly trading range" is 25 points, 'tis not that Long a row to hoe to flip the show to Short: 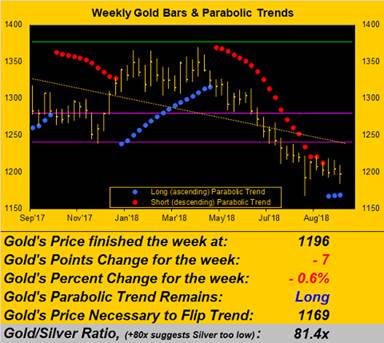 Further from the year ago-to-date perspective, Gold is -7%. But in comparison to the data from the "Live by the Volatility, Die by the Volatility Dept.", 'tis but a third of the damage being suffered by precious metal equities, to wit Newmont Mining (NEM), Goldcorp (GG), Franco-Nevada (FNV), and the VanEck Vectors Gold Miners exchange-traded fund (GDX), all being -20%, dare we further mention the Global X Silver Miners exchange-traded fund (SIL) which is -27%. Fairly messy this view, rather akin to adding to one's slice of Swiss cheese a spread of mustard, only to then find it having dripped through onto one's pants: 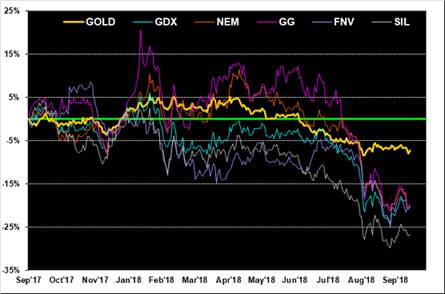 Speaking of Swiss as we turn to the BEGOS Market Standings year-to-date, we see the mighty Franc off the least (-0.7%) of the losers. In fact, the table's order of the markets is the same as it was at the end of August, with only Oil, the S&P 500 and the Dollar Index (which whilst not a BEGOS Market we include in this stack) are in the black to this point. So-called "Dollar Strength" being Gold's bane remains the rationale being bandied about, whether from the FinMedia or some billionaire chit-chat we took in a few evenings ago in dear old Monaco. And yet let's again take note: the Dollar Index settled out this past week at 94.810, (with Gold as noted at 1196); but in recent years, we've seen the Dollar Index firmer than at present, i.e. up in the 95 "handle", with Gold nonetheless simultaneously trading up in the 1300s. Hardly any one-to-one relationship there, be it by price, or even more importantly by direction as has been herein detailed in past missives, (you'll recall the Dollar Index and Gold both having recorded double-digit percentage gains throughout the first half of 2010). That being "the then" and this being "the now", today's vast undervaluation of the precious metals stands ever so stark. And for this year-to-date, here is the slate:

From slate to fate, as least that which is being suggested by the Economic Barometer. Not helping its case this past week came the slide in the Chicago Purchasing Manger's Index for September, a zero inflation reading for August in the Fed's-favoured Core Personal Consumption Expenditure reading (reported after the Federal Open Market Committee voted to raise their Bank's Funds rate along with the expectation to again so do come December), as well as further fallout from Pending Home Sales. Given that the Econ Baro generally leads the S&P 500, we noted during the week that per his cyclically adjusted price-to-earnings (CAPE), Bob Shiller says the U.S. stock market is the most expensive in the world. Our own "live" price/earnings ratio for the S&P is presently 52.2x. And in seeing a recession looming, our "ole buddy" Al Edwards at SocGen has remarked that "...stocks are drunk on kool aid..." No argument here; just look at the S&P (red) vs. the Baro (blue):

Let's next turn to the trending of the precious metals across their daily bars from three months ago-to-date for Gold on the left and Silver on the right. And clearly Gold's trending consistency remains anything but, the blue dots in full wayward stumble. But for Sister Silver, her having been excessively undervalued by the Gold/Silver ratio (which week-over week has gone from 84x to 81x) has brought some buyers to the forefront, her "Baby Blues" breaking from malaise into a streak of rising days: 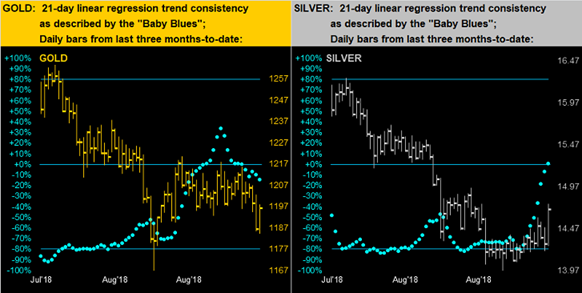 Thus in next turning to the respective 10-day Market Profiles, we see the white metal (at right) having shot up toward the top of her stack, whilst the yellow metal (at left) remains sub-par at best, the lower 1200s having built in a solid slab of overhead resistance: 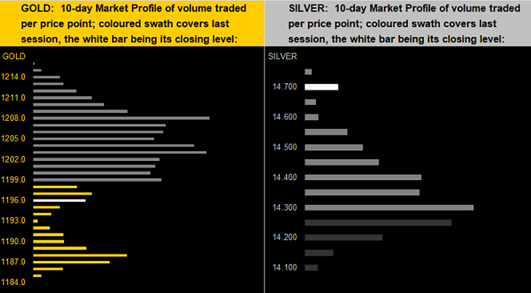 All of which brings us the to our broad-based view of Gold's strata-defined structure by the monthly bars from price's All-Time High of now better than seven years ago. And specifically therein, have a look at the last six rightmost bars: all of them are red. That's just the fourth time in the 525 completed trading months posted by Gold since January 1975 that there's been a string of six consecutive down months -- and never has there been a seventh! Does this "guarantee" Gold's posting a gain for October? Obviously not, for if history always repeated itself Gold would be maintaining its store of value as the mitigant of currency debasement rather than having tailed off as we've seen week-in and week-out per the right-hand panel in each missive's opening Gold Scoreboard. Instead in the below graphic, price again finds itself teasing the tenuous line between the bottom of the basement ("sous-sol") and purgatory: 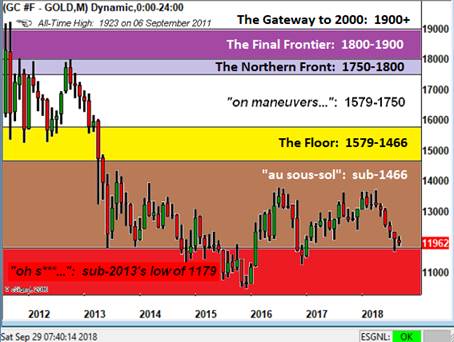 Gold through the eyes of Swiss cheese, indeed. 'Course, not all Swiss cheese is full of holes, the solid bit oft referred to as "blind". But having some solid Gold is anything but blind ... just keep that in mind! 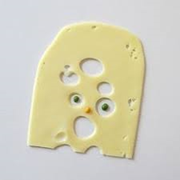