Gold Remains Firm Whilst All The Rest Squirm

Through the turn of the twentieth century, one of the so-called "common coins" here in Monaco was the 100 Franc Gold piece depicting the image of then Prince Albert Honoré Charles Grimaldi. Albert I was not as nearly beloved by his Monégasque subjects as is today's Prince Al by the principality's citizens and residents. But the coin itself is a collectible keeper: with its .900 pure Gold content of 29 grams (= 1 ounce), the piece is valued well beyond the 1230 level at which trading otherwise settled out the week yesterday (Friday). We presently see asking prices for the coin's 1895 edition exceeding $4,000 ... don't accidentally plop one into a casino slot at the Café de Paris.

Still today, with Gold trading at but one-third of the coin's purported value (which in itself is far closer to where Gold "ought be" trading by our 2833 debasement measure shown above), the yellow metal is nonetheless getting enough of a combined safe haven/technical bid these days such as to be winning the battle of the BEGOS Markets. And in viewing them here per their percentage tracks across the past 21 trading days (one month), only Gold is, at present, higher, (+2%): 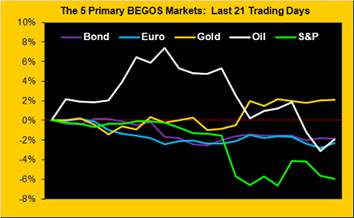 Specific to Gold getting a technical bid, we see it supported here in price's weekly bars from a year ago-to-date. The six weeks thus far of parabolic Long trend are finding their blue dots beginning to climb out a bit more from their initially "flat" state, with price pointedly en route to attempt re-entry back into The Box as bounded by the 1240-1280 purple lines. (Seems as if we've annoyingly been writing about The Box since the time of Albert I)... 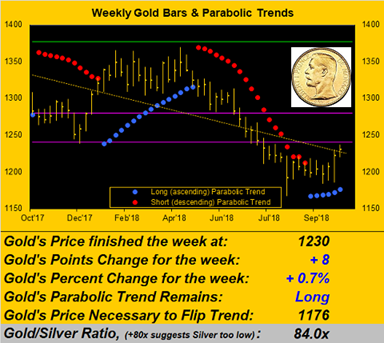 As for the balance of the BEGOS Markets squirming, indeed the Prince of Squirm these days continues to be the S&P 500 as next pictured with the still-declining Economic Barometer. As the past week unfolded, we were briefly bemused by this headline per a highly-visible analyst: "The stock market is overdue for a one-day 5% or 10% plunge" ... did we not just have one? Well almost: High-to-Low intra-day on 10 October, the S&P 500 futures moved -4.1%; and then the next day similarly moved -3.1%. In fact, the net change for the S&P itself through those two days was -5.3%. Either way, we're far overdue to get at least that much in a single day, especially given the well-above average speed with which the S&P futures are trading of late, plus our S&P target of 2154 to complete a full 27% correction. And as for the Econ Baro itself, 'twas not helped this past week by actual shrinkage in September's Retail Sales (ex-autos) -- something that has not occurred since May a year ago -- plus slowing in Housing Starts and Existing Home Sales along with lower August revisions for both measures. (And yes we were a bit dubious of Leading Indicators coming in at the +0.5% consensus, given the Baro's downward course in recent months):

'Course, we're fairly certain the Stateside President keeps an eye on the Econ Baro, as per a recent television interview he stated that the Federal Reserve Bank thinks the "economy's too good" and hence its lean for further rate increases. But beyond the reality of the Baro 'twas reported this past week that the level of job openings now exceeds the record seven million-mark, and moreover that the S&P/Experian Consumer Credit data indicates the composite default rate is at the year's low. And then there's this from folks at the World Economic Forum: for the first time in 10 years they've ranked the USA as having the world's most competitive economy. So much for past years' leaders like Switzerland and Singapore, eh? (Obviously nominal gross domestic product and workforce size are not factored into the equations).

To further affirm other markets-a-squirm, let's go 'round the horn for the full set of BEGOS Markets, again from a month ago-to-date: save for the two precious metals, you can see that the trendlines all are down for the other six components. Clearly, the firmest set of rising blue dots for linear regression trend consistency is that for Gold, whilst those for Silver are faltering. And as we've previously written, the notion of the Gold/Silver ratio being above 80x is losing some of its rarefied white metal appeal: the present reading of 84x finds the ratio above 80x for the 46th consecutive trading day, the longest streak millennium-to-date. Prior to this, the streak of most duration above 80x was just 24 days ... from March into April of this year. Is 80x becoming the new norm? On verra. Meanwhile, here's the whole bunch: 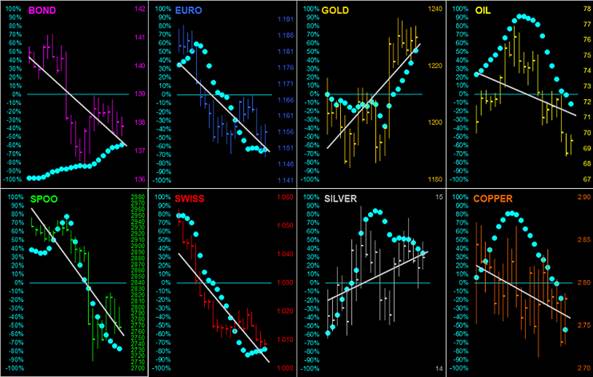 Finally in turning the the precious metals 10-day Market Profiles, we find Gold on the left having closed out the week on the most heavily traded contract price (1230) of the last fortnight, with Sister Silver on the right at 14.70, one graphic pip above her highest volume handle of 14.65: 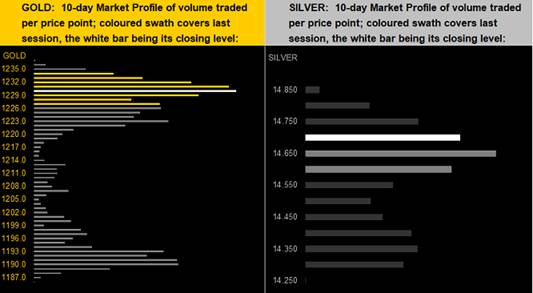 Toward closing, we penned today's missive at our favourite beach-side bistro. The owner, an Italian gentleman whom we've know for better than 30 years, asked me: "Which do you like better? The Dollar? Or the Euro?" Response: "The Swiss Franc. And get some Gold as well." Not a bad notion nor writing venue, one has to say, on this brilliant, late October day: 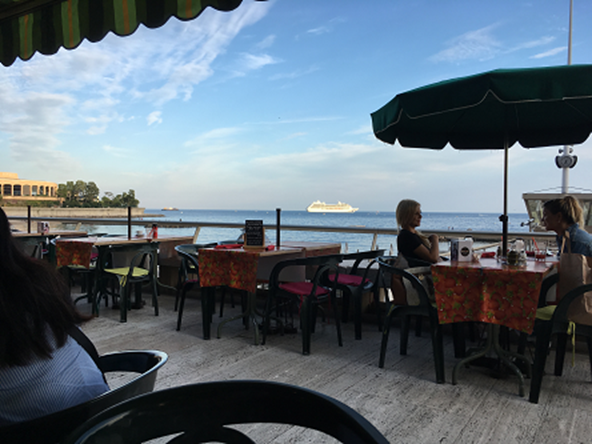 Next week brings us the first reading of StateSide GDP for Q3 ... and consensus is calling for almost a full percentage point of slowing. So avoid the squirm and keep that grip on Gold firm!