Apparently excitable and sufficiently widespread were reports this past week on Gold going up such as to generate an email from a valued, non-financial media friend specifically quoting from the Dow wires that "... demand for the haven metal rose through the week amid broader market turmoil..." In turn, our friend leveraged this into the hopeful expectation for an invitation to a popular local eatery to be "...paid for by your new-found profits..."

Toward bringing our good friend's feet back to ground, we replied as follows: "...Whilst your shared enthusiasm lifts our spirits, let alone as does your valued and honored friendship, Gold’s movements remain puny at best. Oh the FinMedia in their ignorance take a worked-up view of it all, as do they similarly refer to these mild stock market corrections as 'routs' and 'decimations'. ‘Twill be interesting to assess what descriptives up with which they’ll come upon Gold and Sister Silver both accelerating higher in a far more material sense and as the S&P 500 furthers its 25%+ 'correction' down to 2154..."

For at the end of the day, indeed the week, Gold netted a yawning gain of five points as below portrayed in the weekly bars by settling yesterday (Friday) at 1235, the prior three days' respective settles being also at 1235, 1236 and 1233. Ever so "Goin' Nowhere"(thank you again, Chris Isaak) is our Gold.

To be sure, following Gold's parabolic trend having flipped from Short to Long seven weeks back on 14 September, price's rise from then at 1198 to today is but 3%. Moreover as we've herein been anticipating, price actually peeked inside of The Box (1240-1280) intra-day during the last two sessions of this week: we nonetheless still view The Box as a fairly non-porous concrete slab which, barring a substantive buyers' push, ought cause all sorts of fits and starts up through which to get, if at all. A sorta scary scenario... 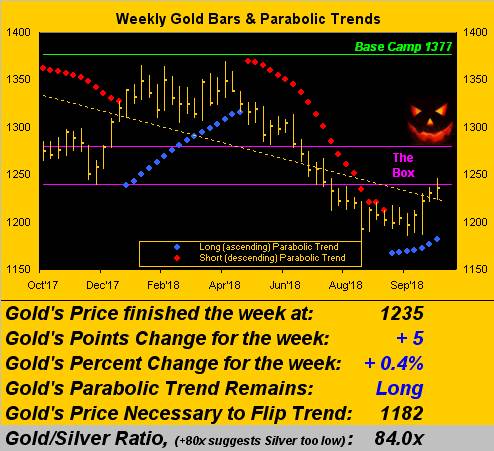 Truly scary is the Gold/Silver ratio still dwelling above the once-rarefied level of 80x. As herein queried a week ago, is 80x becoming the "new normal"? Here's the picture from 2001-to-date: 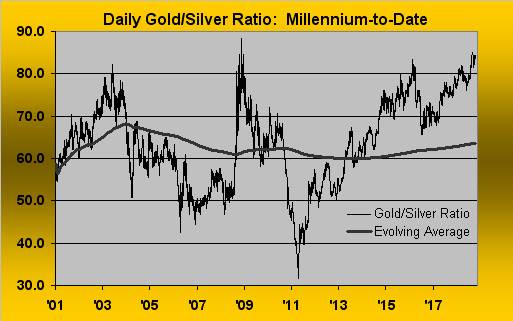 Still, amongst the five primary BEGOS Markets (Bond / Euro / Gold / Oil / S&P), at present the most negatively-correlated of their 10 possible combinations are Gold and the S&P, both shown here with their percentage tracks from one month ago-to-date (21 trading days); again, note how "unch" on a closing basis Gold has been these most recent days:

Beneficial (we'd hope) to Gold's recent buoyancy is the ever-ebbing Economic Barometer which was further befallen this past week by that slowing Q3 Gross Domestic Product initial reading, as well as by abating levels in September's Durables Orders and New Home Sales. Now in our 21st year of maintaining the Econ Baro, with it invariably the S&P gets back into line, as of late has swiftly become the case. 'Course, just as currency debasement is the ultimate driver of Gold's price, so are earnings the ultimate driver of stocks' prices. Our "live" price/earnings ratio for the S&P 500 remains an ungainly high 44.7x, (that's double what is historically considered to be "high"), in turn supporting our view that the current stock market correction has yet to turn substantive. Moreover, query this: with Q3 Earnings Season well underway, 174 of the S&P 500 companies have filed their reports, of which 145 (83%) are improved over Q3 of a year ago ... but given the vast reduction in the corporate tax rate, ought one think that all 100% should have improved? Yes, some CFOs may be more aggressively taking risk with their margins, but what if via the 06 November StateSide elections Congressional power shifts parties and the tax cut is "as promised" rescinded? Just thinkin' ... Just sayin' ... Got Gold? Here's the Baro with the S&P (finally) racing down accordingly:

Naturally 'tis not just StateSide about which the economy is coming under concern: the People's Republic of China a week back reported its Q3 GDP growth as having slowed to a pace not seen since the "financial crisis"; that was 10 years ago and one well remembers 'twas right during this time in 2008 as a trader getting body-slammed time-and-again in fiercely-fast market conditions, (not entirely dissimilar to what we've had in recent days). The S&P back then was en route to a better than 50% correction; the current one at this point is but a wee 9%. And 'twas also just a week ago in Monaco an Italian friend of ours was carrying on about his native nation's poor business performance and rampant level of debt, such that Moody's cut his country's credit rating to within one pip of "junk" status. "Arrivederci amico!"

Trying to return to having some degree of glamour without really having gone anywhere is Gold as we turn to the following two-panel chart of daily price bars from three months ago-to-date on the left and the 10-day Market Profile on the right. And following that really messy blue dots patch of linear regression trend inconsistency from two-to-three weeks back, we've been pleasantly surprised by this recent stint of price climb, albeit as earlier emphasized, the daily net changes have been very scant of late as you can see per each bar's closing nub. Thus 'tis no surprise to find present price fairly centered in the Profile with 1231 as the dominate support/resistance trading level:

For Silver, her picture still appears more daunting by her declining Baby Blues at left; typically we'd expect price to breakdown per this technical condition and should Gold itself be running out of puff just below The Box (1240-1280), Silver ought not fare entirely well in the offing. Note too per her profile at right, she is centered on her 14.70 support/resistance price:

All-in-all we see Gold as "entrapped" through here at least near-term, which is better than betting on a negative bent. The ongoing chaos especially in the stock market with elections in the balance ought fundamentally keep Gold's price from sliding too much, whilst overhead we've the annoying-as-ever resistance of The Box, albeit inside it would be a good refuge for Gold to gather itself together toward ultimately breaking back up into the 1300s ... from which a run to finally re-achieve Base Camp 1377 would be nothing short of splendid. But by year's end? First let's get onto the other side of said StateSide elections.

Finally we've this from the "Money, Money, Who's Got Your Money Dept." Over at the Wells Fargo Investment Institute (quite the catchy name within a bank recently out of rehab), one Mr. Cronk is advising to deploy cash into down-beaten stocks, whilst counter to that over at Morgan Stanley one Mr. Wilson sees the S&P (presently 2659) down into the 2500-2450 range by year's end, (which obviously we view as modest). Either way, what's your money manager doing with your dough, eh?

Given 19 metrics are due next week for the declining Econ Baro, beyond which former Federal Reserve Bank Chairman Paul Volcker says with respect to the nation at large that "...we're in a hell of a mess...", and with the StateSide elections still in the balance ... should it all blow up ... we like Gold! 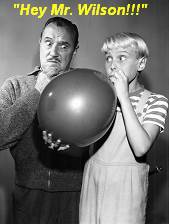