URANIUM: A Better Speculation Than Gold

I see uranium as a better speculation than gold today, and I'll tell you why.

But first, let me ask you something. Does it make you angry for me to say so?

If so, you're in danger. The art of successful speculation is about rational evaluation of trends and probabilities. We can't afford to let what we wish were so to interfere with our ability to see what is so.

I'm not here to look clever beating up on anyone's favorite investment. Nor am I here to be a cheerleader for whatever I like most. I'm here because the good folks at Kitco.com asked me to offer you guidance based on my years of experience working with and alongside some of the best speculators in the resource sector. (If you'd like to know more about my work, please click here.)

I should also quickly say that I don't see gold as an investment at all. Gold is money. It's the ultimate refuge for wealth. It's where I put my savings.

Gold stocks, however, are assets I speculate on when I think gold prices will rise—which I do. I currently have more money invested in gold stocks than anything else.

But my most recent speculations have all been in uranium stocks. That's worth stressing, because I'm not just giving you a theory here. I'm telling you what I'm doing with my own hard-earned cash.

So why do I see uranium as “better” than gold today?

Because I don't know what will happen to gold in 2019. Neither does anyone else, no matter how confident they sound. Gold could easily break out and make many gold bug dreams come true next year. But it's been range-bound for years, and that could continue next year as well. We'll only know for sure in hindsight, which is not helpful today.

On the other hand, uranium has long been a “when, not if” question, and I do think uranium's time has come. Note that I don't say that uranium's time is imminent. I understand that investors have been burned by uranium's false dawns in recent years. That's why I've been waiting for a set of conditions that tells me the rally is for real. That's exactly what I see today. 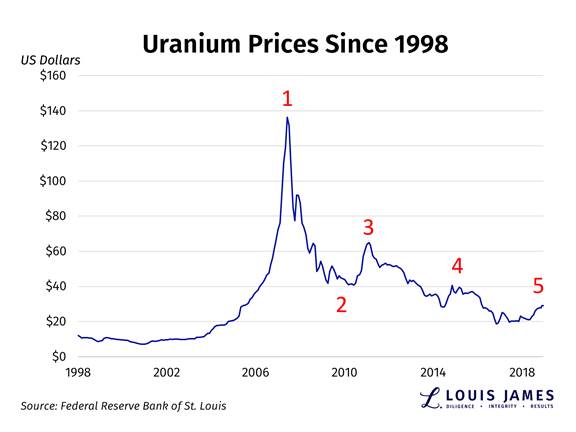 This brings us to now—a terrible time to be a producer.

The most crucial facts today are: 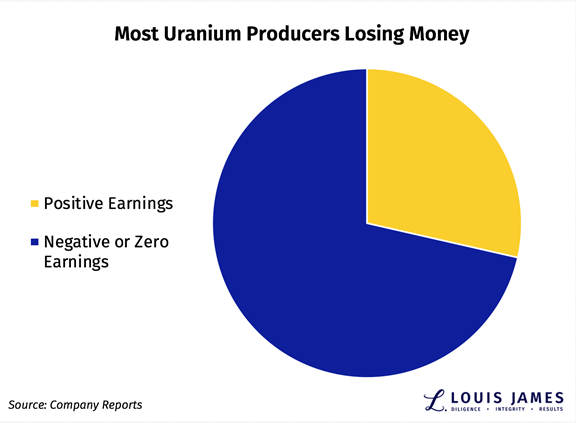 The world's uranium producers are in dire shape. Even the best of them, Cameco and Kazatomprom, are shutting down production in response to lower prices. That includes flagship mines like Cameco's high-grade McArthur River mine.

Uranium is selling so cheap, miners with long-term contracts for delivery at higher prices are buying uranium at spot and selling that to their customers instead of mining. As crazy as it sounds for uranium producers to be buyers, it makes more sense than spending more money mining and depleting their assets in the ground.

This cannot and will not last.

Even the companies with the best new projects are in no hurry to advance them toward production. 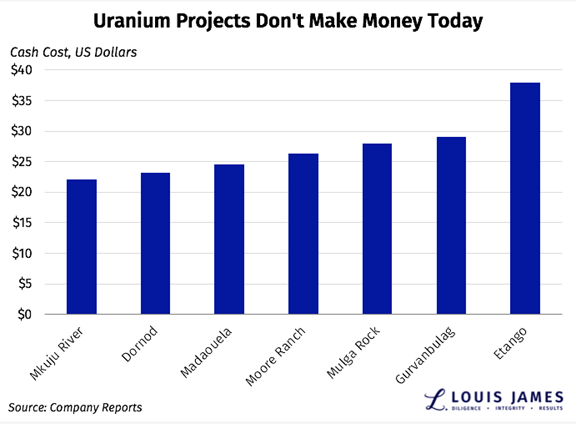 Note that the cost per pound of production in the chart above is a cash cost figure, not an all-in cost. You can add 50–100% to the bars above and still get a conservative estimate for how high uranium prices would have to rise for these projects to be profitable.

Meanwhile, the two facts remain: the world needs uranium; and it's not going to get it at current prices. Something needs to give.

But why do I think dawn is finally here? In part, it's the most recent price action. Let's zoom in on the last couple years. 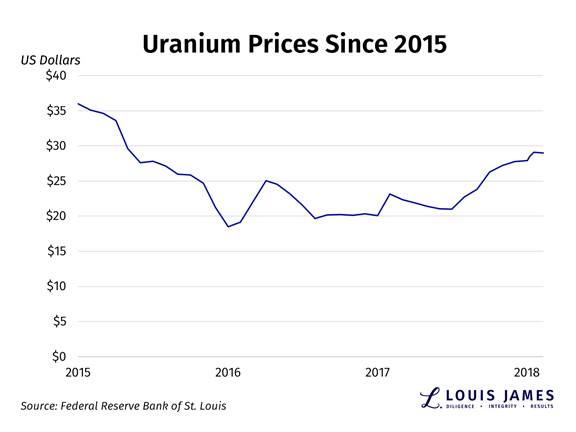 As you can see, the current high is higher than the two false dawns we've seen since the bottom in early 2016. Perhaps more significantly, we've seen higher lows since then as well. The last few pullbacks have been nickels and dimes. This trend is very strong.

A critical point here is that the Japanese have announced plans to restart nine nuclear power plants now, and 21 more over time.

Another very important point for resource speculators is that uranium's fundamentals are almost completely insulated from the general drivers of the commodities markets. Specifically, this means that while there's significant potential for near-term weakness in other metals and resources, uranium has already dropped below “stupid cheap” and has more imminent upside than downside.

All of uranium's indicators are pointing upward. It's the only asset of any kind that I can think of for which this is true.

Let me be as clear as I can on what this does and does not mean: