I have written before about palladium’s rapid rise in 2018. I said I was skeptical it would last. Given that palladium prices just spiked above gold prices, albeit briefly, I’m sure glad I didn’t say that could never happen. 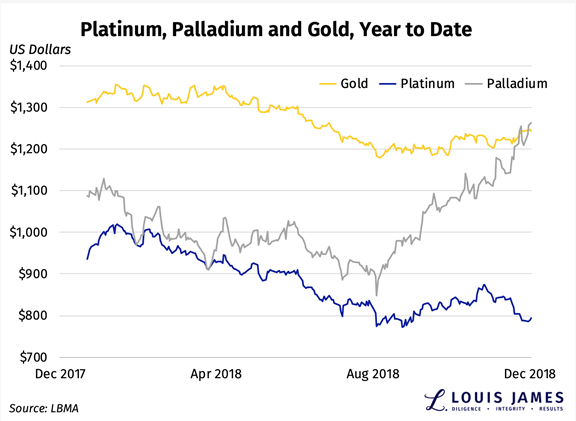 I’ve included platinum in the chart for reference. Gold, platinum, and palladium were roughly trending down together until August, when all three turned upward. But palladium outperformed the others by far.

What’s particularly interesting about this is that the narrative that’s driving palladium prices is increased demand, primarily for use in making gasoline engines in China. But we now know that the Chinese economy was decelerating that quarter. This suggests to me that the “storyum” here is more important than the palladium itself is to Mr. Market at present.

I’m even more skeptical than I was before that this will last.

To explain why, let’s pull back to look at the bigger picture… 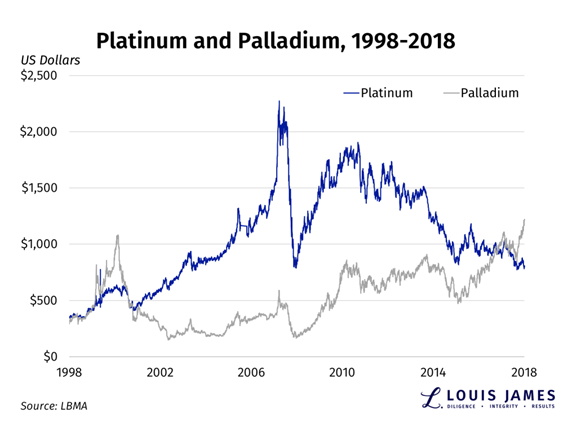 Several things stand out in this chart. First is that 20 years ago, platinum and palladium both spiked. An ounce of palladium sold for more than gold for almost four years. That didn’t make palladium a safe-haven asset, however—and certainly not a monetary metal. The price inversion didn’t last, and palladium underperformed both gold and platinum for the next dozen years or so.

Fast forward to today, and we have the Dieselgate scandal dragging platinum lower than gold. And now, the “China likes gas-powered cars” story has driven palladium nuts.

But I stand by my analysis. I don’t think palladium is more precious than gold. Any spikes further above gold in the near term will likely be short-lived. Then the narrative will move on and palladium will go back to being just another silvery industrial metal. The fact that palladium is expensive today doesn’t make it a safe-haven asset or a monetary metal.

Key point: the trade war is very bad for the palladium narrative.

Unless Trump and Xi make a deal soon, I think the odds favor palladium pulling back—sharply.

If the trade war ends and freer, better trade ensues, we might see palladium prices remain elevated for some time. That could last until the next time industrial metals like this get whacked, which could happen with the next round of global economic figures. Longer term, it won’t last beyond the point when all those new Chinese electric cars steal the market from gas engines. Given how quickly things happen (or are made to happen) in China, I stand by my assertion that most Western market analysts are vastly underestimating the speed at which China will go electric.

But even if I were wrong about that, I wouldn’t even consider putting savings into palladium. Neither would anyone else I know—or have even heard of. When the fear trade drives markets en masse back into gold, I don’t expect palladium to even be a contender.

Dollar edges up versus euro after U.S. producer inflation data

Friday Charts for Gold, Silver and Platinum and Palladium, December 9