Oh were 2019 in this missive's title the forecast price rather than the year.

Yet per the above Gold Scoreboard, a price of 2019 -- and well beyond given our currency debasement price alone of 2854 -- must inevitably in the cards once Gold plays catch-up to the green money supply line at upper right. But again, we don't expect 2019 in 2019. 'Course, iconic Monty Python is on record as having said "Nobody expects the Spanish Inquisition!" ... thus one never knows, eh?

Therefore Our Forecast: A week ago we hinted at what 'twould be. So again in looking at the above Scoreboard and its price tracks for the past three years, what is the overall conclusion? That the price of Gold hasn't really materially moved anywhere in any of them. That in turn means Gold's overhead price structure hasn't been altered because price hasn't reached up that far, (for example above Base Camp 1377). Price is what 'tis. Therefore, 'tisn't hard (let alone rocket science) to project price for this coming year. So given that nothing overhead has been reached such as to be altered:

Fairly simple stuff, what? "Whoomp! (There It Is)"

And whoomp here this is: with but one trading day left in 2019, Gold has marginally departed above the top of The Box (1240-1280), settling out the week yesterday (Friday) at 1283 as we next see in the weekly bars. Our call has been that come year-end on Monday, price shall be nestled within the "safety and serenity" of the The Box. But should the wheels again come flying off the stock market in finishing off 2019, toward furthering the "fear trade bid" we ought instead see Gold finish atop The Box. Moreover (as we'll herein note), Gold tends to do well on the year's last trading day. Meanwhile, here are the weekly bars: 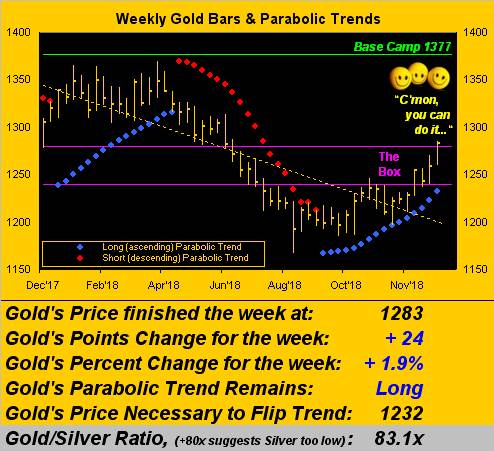 Also looking back from this date a year ago, here is Gold's practically "unch" net cumulative percentage change of -1%, along with those for the "over-leveragedly-lower" equities of Newmont Mining (NEM) -8%, the VanEck Vectors Gold Miners exchange-traded fund (GDX) -11%, Franco-Nevada (FNV) -13%, the Global X Silver Miners exchange-traded fund (SIL) -23%, and Goldcorp (GG) -24%. We oft think of miners' leverage to Gold itself being perhaps two times to four times, not teens times, (hint hint, nudge nudge, elbow elbow). And the ratio of the yellow metal to the white metal continues to confound at a very lofty 83.1x: Got Silver?

Indeed what's confounded the entirety of the BEGOS Markets year-to-date is the not-so-amazing Dollar (the Index for which today is but 75% of its former self some 33 years ago). And whilst not a BEGOS component, we maintain it in the Market Standings which for this entire year (save for Monday) look to "likely" wrap it up as next shown; we say "likely" as for the 17 prior years in this millennium, Gold has netted an up final day 13 times, with five of those instances being better than +1%. Note as well that Gold "bettered" the S&P this year, indeed for the first time since 2011, (the year of Gold's All-Time High price at 1923). But all-in-all, 2018 was "nuthin' but down" for the BEGOS bunch:

Down as well for the year went the Economic Barometer, although that doesn't mean the economy is necessarily receding: the Econ Baro measures both changes and revisions to some 50+ metrics as well as expectations thereto. On balance for this year -- and notably since mid-year -- the economy has of course been growing, but at a slower pace, in turn causing the Baro to decline:

As to the above reference of there still being more "correction" to come for the stock market, here's where we now stand: from the S&P's high of 2940 on 22 September, we continue to look for a 27% run down to 2154 which was a pre-2016-election resistance price. Thus far, the S&P has come down 20% to the 2347 level meaning that our expected correction has now run 75% of its course. 'Course this past Wednesday, there was much rejoicing as in rather "thin" trading conditions the "Dow" (i.e. that index at which our parents look) went up over 1,000 points, its 5.0% daily percentage gain being the 12th largest since 1970. Unacknowledged in said rejoicing was nary any material moneyflow makeup having been made in the S&P 500 despite it also gaining 5.0% that day. Here is our updated graphic of the S&P's quarterly moneyflow change as regressed into S&P points, suggesting that the Index itself is still some 500 points "high", which if resolved would blow significantly though our 2154 downside target:

Toward closing out 2019, let's go 'round the horn for all eight BEGOS components by their daily bars from 21 days ago-to-date, (one trading month). And as you can see, the baby blue dots of linear regression trend consistency are well up there for all of the usual "safe haven" suspects including the Bond, Gold and even Sister Silver: 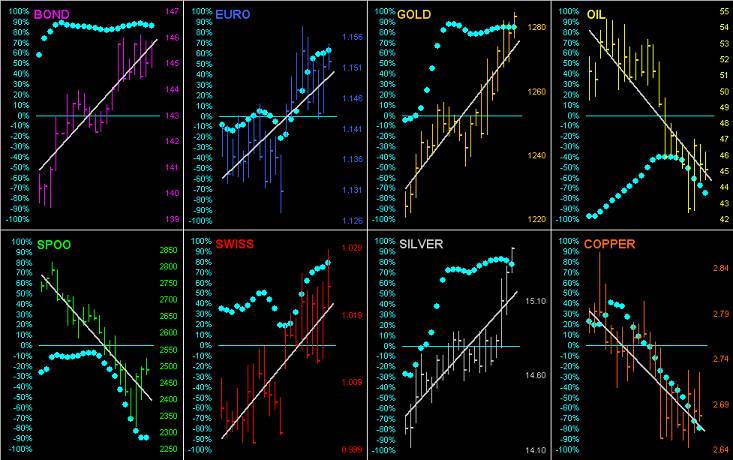 As to the precious metals' 10-day Market Profiles, for Gold below left the trading range is essentially that of The Box (1240-1280), whilst for Silver below right, she finally has welcomed the 15s for the first time since mid-August. Underlying trading support levels are as denoted:

So, save for a day, 'tis month-end as indeed the year goes away. Therefore here is Gold's Structure with all of those overhead strata awaitin' in the wings for shinier Gold days in the future. Note as well that the three rightmost monthly bars are all uppers following that harrowing rash of downers. One wonders how much longer the wee chap at lower right can keep on smiling: 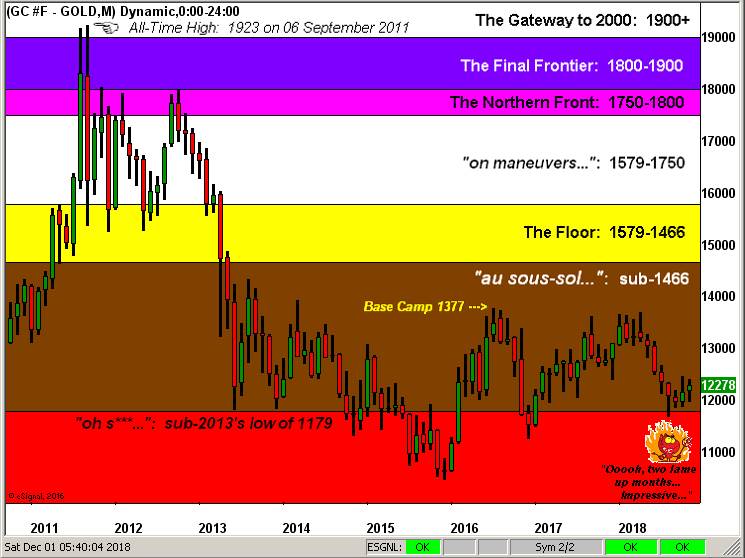 Thus there 'tis, our 52nd Gold Update for this year in which 32 were penned from here in San Francisco, 4 from Monaco, 3 from Switzerland, 2 from Squaw Valley and 1 from Rancho Santa Fe. Now if we can get Gold itself a-travelin' in an upside gear, 'twill be to cheer!