A Longstanding Copper Trend is Changing...

I just had dinner with the copper guy: Gianni Kovacevic, author of My Electrician Drives a Porsche? and chairman of Copper Bank (CBK.C). He was flying through and extended his layover in Puerto Rico to check it out.

One of the things Gianni pointed out that really struck me was the extremely high correlation between copper and oil there’s been for decades. It’s about 0.84 since 2002 (with 0.0 being no correlation and 1.0 being perfect correlation). 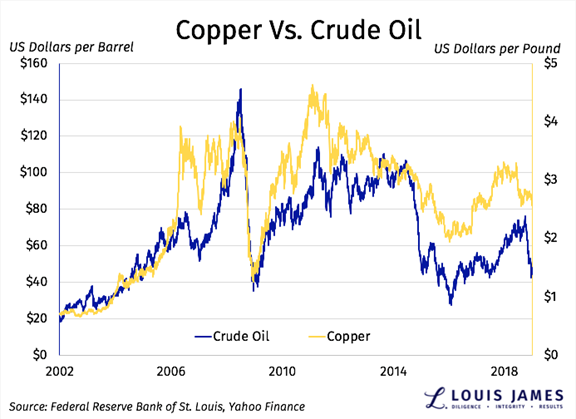 As you can see, the relationship is very tight. It’s interesting to me that the divergence on the left side of the chart was caused by the shutdown of a single major copper mine (Grasberg). That shows how easily prices can soar if—or more like, when—we see more supply disruptions.

But the most interesting thing to me is that while oil falls like a lead balloon in the last few weeks (right side of the chart), copper holds relatively steady. Copper doesn’t always fall as much when oil steps off a cliff, but it has fallen with oil since 2002. Not this time. And it’s held up better than oil since 2014.

What does this mean? Well, I don’t want to make too much out of a few little squiggles on the chart, but think about the logic:

I’m not saying copper’s off to the races tomorrow. Until the trade war is over, I’m not bullish on any industrial minerals, even the ones I’m keenest on, like copper and nickel.

I am saying that it may soon become a major mistake to expect copper prices to track oil prices and invest accordingly.

And when the trade war is over, or the global economy shakes it off anyway, I do think copper will be a star among the energy minerals.

For now, I’m on the sidelines, watching.