Last summer, we wrote about the two significant trading opportunities that we typically trade each year in the gold sector. In that article, we wrote as part of the headline that the bottom was near, and we explained how we typically trade each intermediate cycle low using leveraged funds such as JNUG. Now with the benefit of hindsight, we get to see if the seasonal pattern we have come to expect repeated itself, or if something different happened this time around. For that, let’s take a look first at an updated chart of gold. 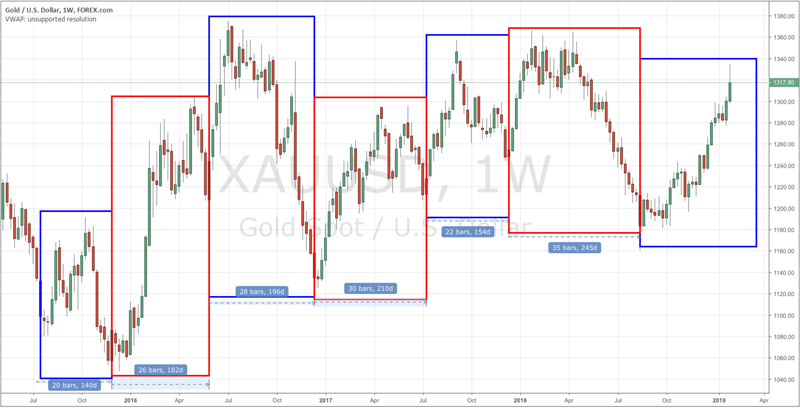 In our first article, we stated that gold usually makes a significant bottom in the June/July period. From the summer low, gold tends to rally strongly into the fall, and then fade into a winter low, typically in December. As we can see in the chart above, last summer’s low was slightly delayed, with the bottom not occurring until August 16th. So where does that leave us now? With the beginning of the current cycle starting later than usual, we are not surprised to also see a delay in the typical December cycle low. We stated previously that these cycles typically last from 21-30 weeks in duration. The last cycle managed to run for 35 weeks, which is longer than usual. With the current cycle in its 25th week, we are in the timing band where we would typically expect to see weakness in gold as it drops into its next cycle low. It is possible we will experience another stretched cycle, which would give time for more upside, but with each passing week, the risk of a downturn increases.

Finally, we discussed trading ETF’s such as JNUG to gain leverage to the cyclical price of gold. A look at the current chart below shows from bottom to top, JNUG offered a return of 89% for anyone able to enter at the bottom and sell at the top. Unfortunately, the miners traded slightly out of sync with the price of gold, making it almost impossible for traders to time their entry and exit perfectly in the current cycle, so even though the return was higher than the previous couple of cycles, it is unlikely that most traders profited from the entire move. 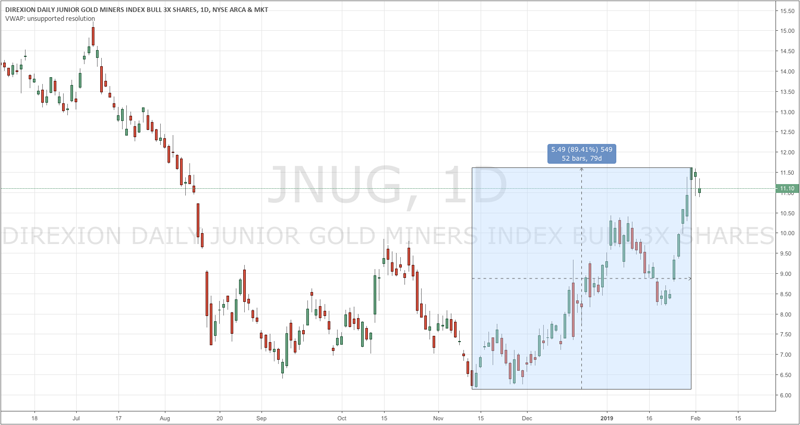 At Wanderer Financial, we look at both price and time for entry cues. While the price has recently been very bullish, cycle timing suggests caution is warranted. We will be interested in establishing a new long position after evidence of a cycle low is visible on the chart. Want more articles like this? Head on over to our website and check out the library of free stock trading articles covering gold, etf’s, global markets and more.

newsletter@wandererfinancial.com
www.Kitco.com
Disclaimer: The views expressed in this article are those of the author and may not reflect those of Kitco Metals Inc. The author has made every effort to ensure accuracy of information provided; however, neither Kitco Metals Inc. nor the author can guarantee such accuracy. This article is strictly for informational purposes only. It is not a solicitation to make any exchange in commodities, securities or other financial instruments. Kitco Metals Inc. and the author of this article do not accept culpability for losses and/ or damages arising from the use of this publication.