Gold Stalls on Nothing

Upon there being nothing in your petrol tank, (or for you Tesla-types out there nothing in the form of ions in your anode), your vehicular conveyance stalls. As well this past week, Gold found itself fuel-less with nothing to give it go.

On the heels of the prior week's dovish nothing from the Federal Reserve Bank, so next came nothing from the Brexit-foggy Bank of England as well as nothing from the recession-wary European Central Bank. Given the Lunar New Year, our celebratory Asian friends came with nothing other than a hearty "gong hei fat choy" in wishing us a prosperous one for the Pig. Why even the week's dose of metrics for the Economic Barometer on balance amounted to nothing. And you know how the song goes: "Nothin' from nothin' leaves nothin'..."--(Billy Preston, '74)

Therefore Gold's week essentially stalled on nothing, settling yesterday (Friday) at 1318, off a wee 0.3% (-4 points). Further to really rub nothing in, per the above opening Gold Scoreboard price a year ago was precisely 1318.1 ... today 'tis 1318.2, a year-over-year gain of 10¢. That's quintessentially nothing. How much did you broker garner in commissions throughout? Certainly more than a dime, indeed well more than nothing.

Notwithstanding nothing as we turn toward Gold's weekly bars, we do therein find something: the current parabolic Long trend of 22 rising blue dots now exclusively ranks fourth in duration millennium-to-date. That said, it has been a relatively weak parabolic Long trend compared to the only three that have endured longer: the low-to-high percentage gain for the 26-week trend ending 16 December 2005 was 30.2%; for the 25-week trend ending 23 December 2004 'twas 18.6%; and for the 23-week trend ending 07 February 2003 'twas 25.8%; but for the present 22-week trend the low-to-high percentage gain thus far is just 12.4%.

And of course there've been such trends of less duration with percentage gains greater than that of the current stint. For example: the 17-week parabolic Long trend ending 13 May 2016 contained a low-to-high run of 20.7%, (and in emphasizing the leverage of the miners for that period, the VanEck Vectors Gold Miners exchange-traded fund GDX traded from 12.69 on 22 January up to 26.17 on 02 May, a +106.2% gain, better than 5x the metal itself). But within Gold's 12.4% gain this time 'round, GDX has gained no more than 31.3%, just half the leverage of the run during 2016. All that said, here's the present picture with Gold needing to stay north of 1293 to garner a 23rd week on the Long side: 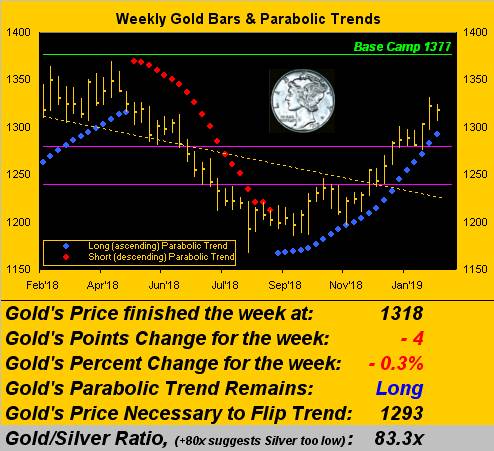 'Course when Gold is stalled on nothing, one can bet that its trading range is also trending toward nothing. To wit our graphic of Gold's "expected daily trading range" (EDTR) from one year ago-to-date. As regular readers know, this is not the track of price; rather 'tis the points range we expect to Gold to trace for each ensuing trading session ... and as you can see with the EDTR now basically half that of a year ago, there's a whole lotta nothing goin' on out there:

Broader term, here's our updated chart of Gold's daily closes since the highest ever at 1900 on 22 August 2011. Today we see price not only above The Box (1240-1280) but as well above the 300-day moving average (1273), itself having stopped declining and indeed residing within The Box. 'Course, 'tis all about regaining the green line at Base Camp 1377, and given the current parabolic Long trend is nearing record-setting duration without like historical levitation (per those better percentage gains described earlier), Gold may soon run out of puff on this run tripping such trend to Short and leaving Base Camp 1377 for an ensuing Long trend:

As for the Economic Barometer, we noted that the week's fresh data combined with both expectations and revisions all netted out to pretty much nothing:

Continued visuals of nothing are next seen here in the rightmost portions of the past three months-to-date of daily bars for Gold on the left and Silver on the right. For both precious metals one can only wonder how much farther the baby blue dots of linear regression trend consistency shall upward wander:

To be sure, nothing is personified when present price is in or around the center of the 10-day Market Profile for which we've Gold (below left) and Silver (below right):

Now as we peer into next week, conditions may morph from nothing into something. Due for the Econ Baro are 15 metrics. And can Gold's trading range get any more narrow? What about the S&P 500? This past Monday it completed the "Golden Ratio" retracement (from 2940 down to 2347 up to 2719) following through a tad to 2739 before descending to as low as 2682 on Friday. Is therefore the overall 27% correction to 2154 resuming? Q4's Earnings Season is last year's weakest by quarterly comparisons to the prior year, our "live" price/earnings ratio remaining a quite high 29.9x and the moneyflow relative to the Index's price change suggestive of still lower levels. Good for Gold? Usually 'tis. Indeed why stall and go into the red with nothing when you can be in the black with something: Gold!