Gold Still Getting a Bid; but Stocks Blowing their Lid

Essentially in sequence to last week's missive "Gold Gets a Bid; Stocks Resume Skid", we again recall that 1966 classic Bob Hope/Elke Sommer/Phyllis Diller comedy thriller "Boy, Did I Get A Wrong Number!"

To be sure, the price of Gold got sufficiently bid this past week such as to finish back (barely) in the 1300s as a weekly close for the first time since 22 February, settling yesterday (Friday) at 1302. Reluctance to seriously sell continues. But as for the "wrong number" and seemingly against all odds, the stock market as measured by the S&P 500 not only gained as much as 3.2% intra-week, but came within 3.7% (110 points) of its all-time high established last September of 2940. Let's dig in a bit further...

On Gold: Yes, price's resilience remains, which within the guise of the weekly parabolic trend being Short is an encouraging aspect. But as also remains starkly evident per the yearly price tracks in the above Gold Scoreboard, price is as stuck as ever at the bus station. Indeed when price on a broad basis basically stays "the same" year-in and year-out, the challenge for the weekly Gold writer is to be sufficiently creative toward sustaining readers' enthusiasm: "Another week of nuthin': how ya gonna couch it this time, eh buddy?"

Well "buddy", this is the 487th consecutive Saturday edition of The Gold Update and we're still here, (wherever here may be, in this case back in dear old Monaco). And as for "couching it", enough bidders for Gold are about -- at least to this point of the Short trend -- to keep price pretty much within The Whiny 1290s without so far having fallen back into The Box (1280-1240). That noted, per the following chart of the Weekly Bars (and given that Gold's "expected" weekly trading range is at present 25 points) 'tis a distant stint for price in the new week to reach up the 42 necessary points to 1344 which would flip the trend back to Long. However, we'll always take price's being resilient rather than its being down, and moreover, the real shocker in the graphic is the Gold/Silver ratio being near historical extremes at 85.2x, (the millennium-to-date average now up to 64.1x): 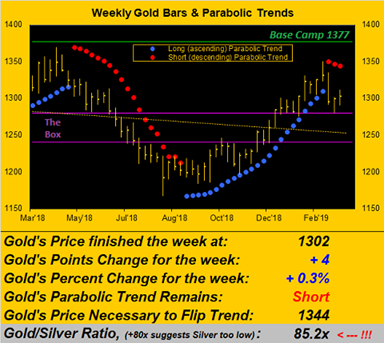 On the S&P: Oblivious to declining amount of money it takes to move the S&P one point (now just 69% of what 'twas on 29 January), and oblivious of course to unsupportive earnings (our live price/earnings ratio now 30.9x and Bob Shiller's Cyclically-Adjusted PE now 30.4x), and oblivious to the lack-luster (that's being nice) Economic Barometer, the S&P we're still told is the place to be. But from the "Why Is This Man Smiling Dept." 'tis because he stays within the relative cash management safety of trading the futures markets rather than losing sleep over stock market exposure! To wit:

¦ A notable markets maverick on the radio said this past week we ought not to worry about earnings; rather, just follow what the institutional traders are doing. 'Course, that works well until it no longer does. And with respect to those cited truthful p/e ratios, they're in and around those levels that preceded stock market crashes in 2008, 2001, 1987, and 1929;

¦ Further with our reference a week ago to the notion of financial writing pools being populated by children, we oft think their mates and siblings are running money desks as well;

¦ Indeed during the week we read that the "S&P 500 ends at 4-month high as stocks rise after strong economic data." Really? 'Twas also simultaneously written that "A Weaker Economy Means It’s Time For Growth Stocks to Shine Again." Oh please! Retail Sales are sound, and to be sure the consumer is the overwhelming driver of the economy ... but March's New York State Empire Index -- which was expected to increase from 8.8 to 10.0 -- actually succumbed to just 3.7; February's inflation data slowed at both the wholesale and retail levels; and January's New Home Sales fell short of both those from the prior month and from what was expected.

All-in-all, waiting for Gold to rise may at times feel akin to Sam Beckett's "Waiting for Godot"; but as for the S&P we see it as "Waiting to Godown". Here 'tis in red vs. the Econ Baro from a year ago-to-date:

Add to the picture that, per the Federal Reserve Bank, StateSide household wealth posted a record Q4 loss. And similar to Larry Summers' comment from a week prior, we've also Jeff Gundlach's reference to "Modern Monetary Theory" as a "crackpot idea". My goodness, you do have some Gold, non? Let's drill a bit deeper into the mine.

Here we've our dual-panel graphic of the daily bars for the last three months-to-date for Gold on the left and for Silver on the right. In both cases, the declining baby blue dots of linear regression trend consistency are not promising of higher prices near-term; however as price itself is at least the initial driver of the dots, were the current trading resilience to pull the "Baby Blues" up before reaching their respective -80% axis levels, the precious metals would likely be back into rally mode en route toward flipping the weekly trend back to Long: 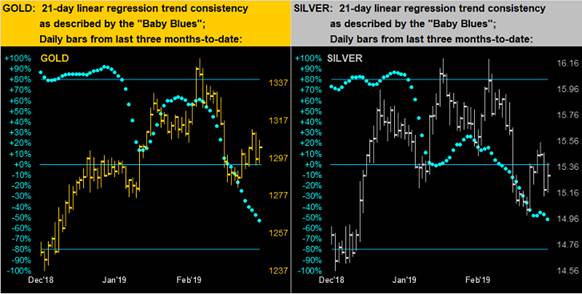 Which in turn begs the question as to which may be the easier way for price to travel. Per the 10-day Market Profiles for Gold (below left) and Silver (below right) there appears in both cases to actually be less upside resistance versus downside support. Shall we therefore keep those bids coming in? Yes, let's shall: 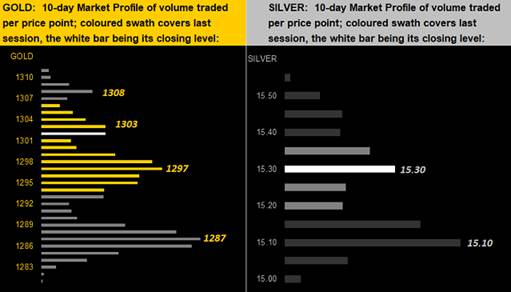 Finally, speaking of the aforementioned Fed, its Open Market Committee gathers this coming Tuesday/Wednesday (19-20 March) toward deciding to do nothing. For were they to do something -- be it a rate rise that the economy would not be able to sustain, or a rate reduction that would signal they've acknowledged the economy is weakening -- we 'spect either way the S&P 500 would not take it well. Rather, keep the complacency of denial alive as the can is further punted down the road. For 'tis all too fragile to do anything at this point. Except own Gold! Just ask Big John: 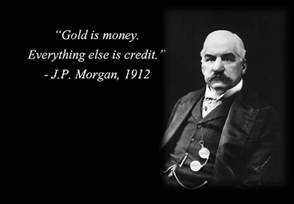