On Friday’s report I spoke about the fact that the major central banks have been quietly accumulating and adding to their gold reserves.

According to the World Gold Council central banks continue to buy gold even after last year’s unprecedented accumulation. In 2018 central banks added a combined 651.5 tonnes of gold to their holdings. Besides the traditional central banks such as the United States, Russia and China, countries that had been absent from this trend have actually jumped on the bandwagon. This trend has been slowly building over the last eight years.

Most impressive is the fact that a number of new buyers have entered the fray, this according to Alan Sykora, a reporter from Kitco news, “This includes Poland and Hungary, the first European Union nations to buy gold since the start of the century, said Junlu Liang, senior analyst with the consultancy Metals Focus. In the case of Hungary, the central bank not only bought its first gold in 32 years, but also increased total holdings by 10-fold”.

Even India has entered into this buying frenzy. On Friday, ET Markets News reported that, “The Reserve Bank of India (RBI) has bought gold for the first time in nearly a decade, signaling that the metal could be in demand as a store of value when returns and capital values of fixed-income bonds are declining in a rising rate environment. The RBI added 8.46 metric tonnes of gold to its stock of holdings during the financial year 2017-18 …” Taking the level of gold reserves to 566.23 metric tonnes, according to its latest annual report.

Actions of the central bank’s gold accumulation has now spread across to fund managers. As reported by Allen Sykora of Kitco News today, “Fund managers sharply increased their bullish positioning in gold futures during the most recent reporting week for data compiled by the Commodity Futures Trading Commission. Markets seemingly were factoring in a more dovish U.S. Federal Reserve even before policymakers gave markets a dovish surprise for the second straight meeting, analysts said.”

Kitco news also reported that TD securities went on record stating “Money managers aggressively covered their short gold positions and took out new long exposure as they anticipated the FOMC to sound dovish. The significant increase in length was also driven by the concurrent weakening of the USD (U.S. dollar) and renewed economic growth concerns.” 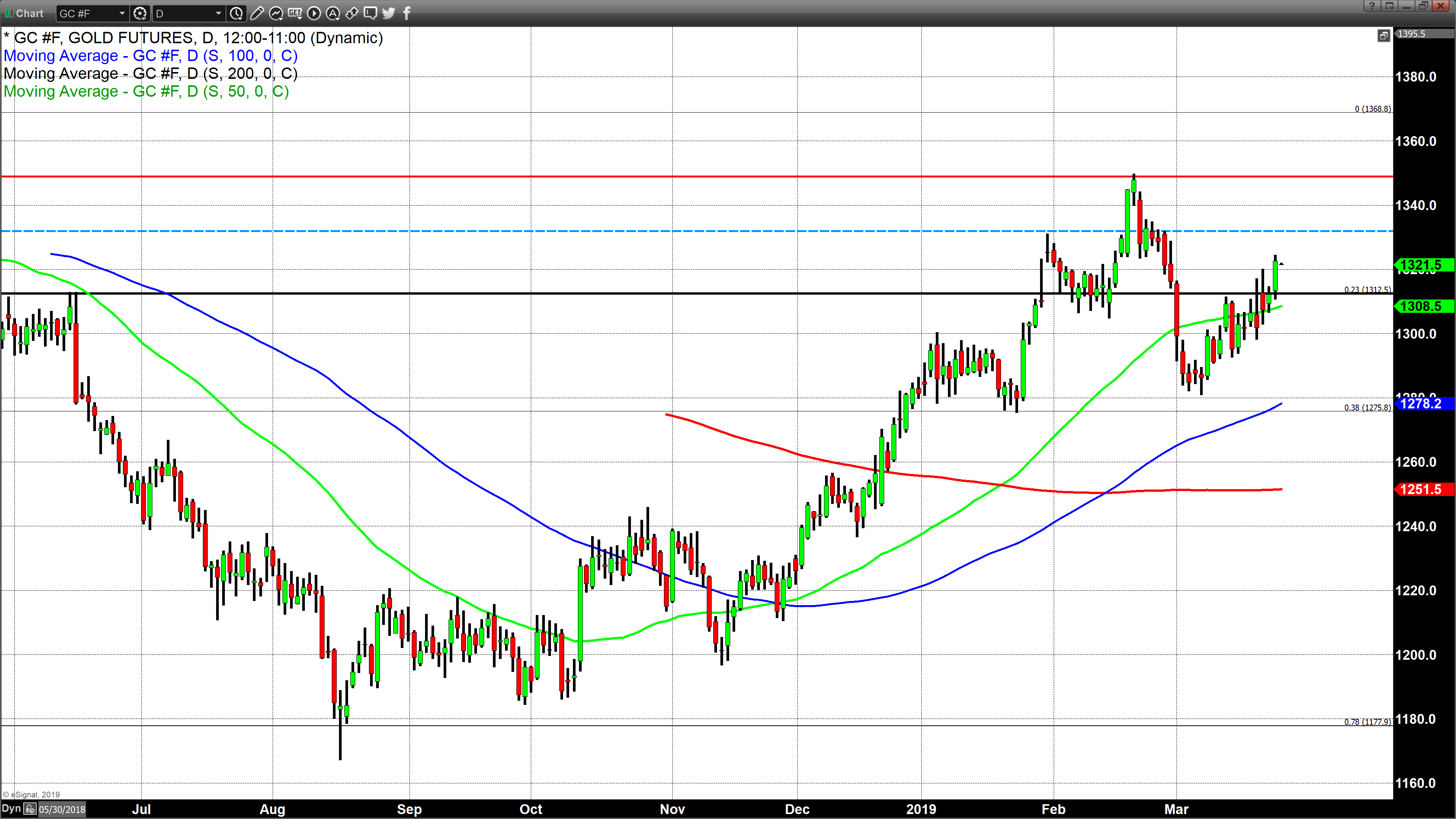 We can certainly see the net result of this renewed bullish demeanor by the major central banks as well as major funds in today’s strong upside move in gold. Gold futures basis the most active April Comex contract is currently bid up by $9.60 and fixed at $1321.90, with the outer futures month of June 2019 currently fixed at $1328.30 which is a net gain of $9.60 on the day. This all-in light of very slight tailwinds provided by the U.S, dollar which is fractionally weaker today.

This can also be seen in spot or physical gold which is currently fixed at $1321.70. Based upon the KGX (Kitco gold index) it is clear just how little the U.S. dollar is affecting gold today with almost the entire upside move completely based upon traders bidding the precious yellow metal higher. The dollar index is providing a decline of $.10 on the day, and after factoring in gains from bullish sentiment bidding gold up by $8.40 gold’s net change on the day is a gain of $8.30.

It seems obvious that concerns about the global economic slowdown, coupled with the extremely dovish actions of the Federal Reserve have been highly supportive of the precious metals complex, which has driven prices higher.