The Copper Crunch Is Real, But...

Back in 2015, Visual Capitalist published a now somewhat famous infographic: “The Looming Copper Supply Crunch.” In it, author Jeff Desjardins projected a supply deficit starting in about 2018, reaching 10 million tonnes annually by 2030. His chart illustrating this forecast looked very much like my own chart, based on current data in 2018. 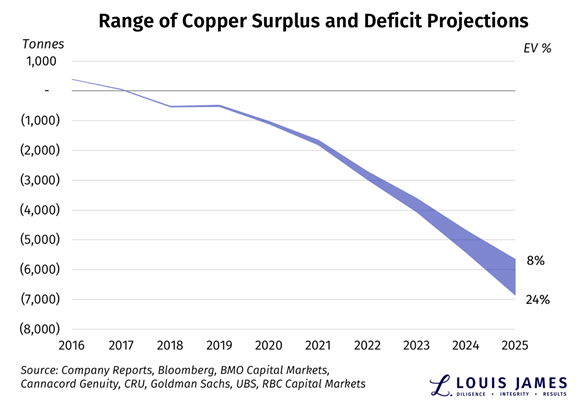 There’s another chart in that infographic that impresses me even more. I don’t have permission to reprint it, but it shows the growing length of time it takes to go from discovery to production in the copper space. Jeff shows that the recent average is 20 years.

I’m not sure that’s true anymore. The world’s newest copper megamine, First Quantum’s Cobre Panama, just came online 50 years after discovery. I can think of several more major copper or copper-gold projects that are still waiting for green lights. Northern Dynasty’s Pebble and Seabridge’s KSM come to mind, among others.

This is a problem for all mining projects, as “not in my back yard” thinking and environmental extremism make permitting projects harder and harder every year. But it’s worse for the big copper mega-mines our civilization depends upon. Even a large gold mine has a relatively small footprint if it’s an underground operation. Pretium’s Brucejack is an excellent example. But most major copper mines are huge earth-moving operations on a scale that turns mountains into valleys.

Even in pro-mining jurisdictions like Peru, local communities are more and more hostile toward these mega-mines. Southern Copper’s Tia Maria project is infamous in this regard, as protests turned deadly when the government sent in the troops back in 2011 and 2015.

This matters because many analysts’ projections for copper supply assume that mines planned and under construction will come online. This is not a safe assumption. And the projected supply deficits I’ve seen for this year range from 50,000 to 270,000 tonnes of copper.

In other words, the copper crunch many of us have been expecting is real—and it has started.

I also think it’s likely to get worse than many experts are projecting. New supplies from the Far East and Africa are particularly vulnerable to setbacks. As per the Peruvian example, Latin America is no cakewalk either.

This does not, however, mean that copper prices are about to go through the roof.

If the trade war ends soon and if the global economy starts heating up again, copper prices could surge.

Given that inventories in the UK, the US, and China are all down over the last year, such a surge could be big, taking copper prices well above US$3.00/lb., perhaps up to US$3.50 or higher. Years down the line as the copper crunch gets more acute, I could see copper prices peaking above US$6.00.

But neither of the two “ifs” above are sure things. I’m convinced that both the US and China want a new trade deal, but getting a meaningful—and enforceable—one is no easy thing. Worse, China’s economic problems seem much bigger than just the trade dispute with the US. Meanwhile, the Fed and the ECB have both lowered economic growth forecasts, and there are plenty of signs of the rest of the world slowing as well.

This is not a bullish environment for any industrial metal, even those like copper that are in current supply deficit.

And it could get worse. As I wrote in yesterday’s article on the US yield curve inversion, I’m not predicting a market crash this year, but that card is somewhere in the deck. A major meltdown would whack copper and other industrial metals prices—hard.

First off, beware of promoters pushing copper stories in the near term. Given the realities of the supply crunch, it would be easy for them to make very compelling cases for why investors should speculate on copper stocks now. Unless they disclose the potential for near-term weakness, don’t trust them.

On the bright side, if the global economy does improve, that combined with the copper supply crunch will be very bullish for copper for years going forward. That means there’s no reason to fear missing out. There’s no rush at all. Watch for the danger to pass; then copper stocks should deliver in spades.

An even brighter possibility comes to us if there’s a major economic slowdown in the near term. For those who hold some cash back to deploy in such a scenario, there should be spectacular buying opportunities.

If that happens, it’s important to understand that the world can not suddenly find an alternative to copper. Yes, aluminum carries electricity, but not as well as copper, and it’s not as suitable for things like in-house wiring and electric motor windings. As the world moves deeper into the new energy paradigm, it will need more and more copper. There is no substitute.

In other words, however low copper may go in the near term, in the mid to long term, it has nowhere to go but up.

So, I’m building cash and waiting to add more copper plays to my portfolio. I’ll buy when the near-term risk of lower prices has passed—or if I get lucky, when copper drops like a rock and I can get great companies for pennies on the dollar.