Trends Decision Today But The Bears Have a Slight Edge Early 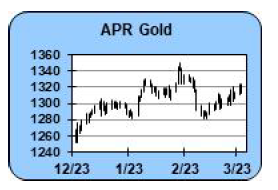 OUTSIDE MARKET DEVELOPMENTS: Global equity markets were mixed overnight, with the Russian market the biggest loser with a 1% decline and the CSI 300 posting the biggest gain of 1.16%. The Asian session was quiet datawise. Overnight economic news from Europe was insignificant, with French consumer confidence for March matching expectations with a one point improvement over the previous month. French producer prices for February came in up 0.4%, above the January result. Italian business confidence readings for March came in softer than expectations and softer than the prior month. Consumer confidence readings for March fell from the prior reading as well and were softer than expectations. Even the Swiss contributed negative economic news overnight with the ZEW expectations index for March coming in at a whopping -26.9 compared to a large negative reading in February of -16.6. The North American session will start out with a weekly private survey of mortgage applications. A January reading on the US international trade balance is expected to show a modest increase to the monthly deficit. There will also be readings on the January US goods trade balance and on January Canadian international merchandise trade.

While gold showed some reversal action yesterday, it remains just above a failure point on the charts of $1318.60 and within the very uniform March uptrend pattern. Fortunately for the bull camp, gold derivative holdings overnight increased to 52.4 million ounces versus 52.3 million ounces in the previous session, as Russian January gold output was found to have increased by roughly two tons from year ago levels. It should be noted that gold ETF's managed their fifth straight increase in a row yesterday, bringing their net purchases this year to 1.2 million ounces. Similarly, the silver market should derive a minor benefit from the fact that Russian January silver production fell by 31 tons from the same period last year. The gold market could benefit over time from Indian government moves to establish "a gold board" to regulate spot exchanges, as that is a complete change of stance by the government that several years ago seemed to be working to discourage gold holdings and now might be facilitating gold ownership. The Indian government indicated that the goal of the exchanges is to make gold an "asset class." While gold showed some reversal action yesterday, it is premature to suggest that its resiliency from the last four weeks has been lost. However, it would appear that the dollar is capable of tracking higher ahead despite slack US scheduled data, and that has to be discouraging to the bull camp in gold. The dollar seems to have managed to spin soft US data into a positive by the argument that soft data is fostering economic uncertainty flows to the dollar, but that argument did not result in safe haven buying of gold yesterday! Silver looked more vulnerable than gold over the last 24 hours, but UBS lent some support with an upward revision in its six and twelve-month silver price forecasts. However, a failure to hold above $15.36 today in May silver would shift somewhat bullish charts into bearish charts.

Palladium has severely damaged its charts so far this week and is perhaps quickly headed down to the next key support level of $1455.60. However, the platinum market has clearly rejected the weakness in palladium again this morning with a fresh three day high and third straight day of higher highs. It does appear as if the palladium market is seeing some selling interest from headlines touting the potential for "industrial rotation" from palladium to platinum because of the recent differential of $700 between the two metals. In our mind the deterioration of economic sentiment due to a series of soft data points, the apparent setback in trade talks last week, and fears toward China has prompted the current correction in palladium. However those pressing the short side of the palladium market should be braced for a sudden reversal/recovery if anything positive flows from the trade talks in China. So far the palladium market has not seen liquidation of open interest, and that suggests to us that the bulls are attempting to "hang on" to their positions. Relatively speaking, the platinum market outperformed palladium yesterday and again this morning, and therefore it is possible that some traders have moved into long platinum/short palladium spread positions because of the technical chart vulnerability in palladium. Uptrend channel support in April platinum today is $859.05, and initial resistance is seen up at $878.20.

TODAY'S MARKET IDEAS: While the charts in gold are a bit vulnerable to start today, prices still sit just above a quasi-double low of $1318.60. There is an uptrend channel support line down at $1313.60, and we suspect gold will have a key trend decision in today's trade! While we are not ready to call for an end to the March uptrend, it is certainly facing a near term challenge.

Use options to position for positive trade headlines 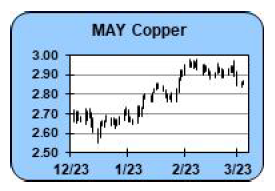 We see the attempt to rally in copper yesterday as a sign that some shorts might be exiting and that this week's low is could be some form of value. It is also likely that the copper market was moderately oversold following the massive two day slide last week and that selling fuel might exhaust itself. The bear camp seems to have an edge because of soft US scheduled data patterns and the slightly bullish dollar track and because Chilean miner KGHM reached an agreement with the labor union to extend contract talks, but the focus might shift to trade headlines today. From a longer-term perspective the rating agency Fitch indicated China will continue to be a major influence on copper prices (not surprising), but they also indicated surging electric vehicle demand would become even more important to copper in the future.

TODAY’S MARKET IDEAS: Traders need to be vigilant for headlines on trade given the resumption of talks, as a slightly optimistic one could be justification for a quick spike back above $2.90. However, without positive trade news and further soft data, the bias could temporarily shift back down, and ranges might be set to narrow until there is positive trade news from China. Those interested in a trade talk strategy might consider buying May atthe-money bull call spreads on weakness this morning in hopes of something positive from trade before the end of this week.

*** This report includes information from sources believed to be reliable and accurate as of the date of this publication, but no independent verification has been made and we do not guarantee its accuracy or completeness. Opinions expressed are subject to change without notice. Any information or recommendation contained herein: (i) is not based on, or tailored to, the commodity interest or cash market positions or other circumstances or characterizations of particular investors or traders; (ii) is not customized or personalized for any such investor or trader; and (iii) does not take into consideration, among other things, risk tolerance, net worth, or available risk capital. Any use or reliance upon the information or recommendations is at the sole discretion and election of the subscriber. The risk of loss in trading futures contracts or commodity options can be substantial, and traders should carefully consider the inherent risks of such trading in light of their financial condition. Any reproduction or retransmission of this report without the express written consent of The Hightower Report is strictly prohibited.