Is It Platinum's Time to Shine?

Ever since platinum prices plunged well below gold prices in 2014, some analysts have argued that platinum is due for a rebound. This usually seemed based on a view that platinum is naturally more rare and therefore it should command a higher price than gold.

I argued then, as I do now, that platinum is largely an industrial metal. The fact that it was relatively cheap wasn’t enough to make its price rise. I was right.

Since then, platinum continued to drop, while gold traded sideways and palladium tripled in price. 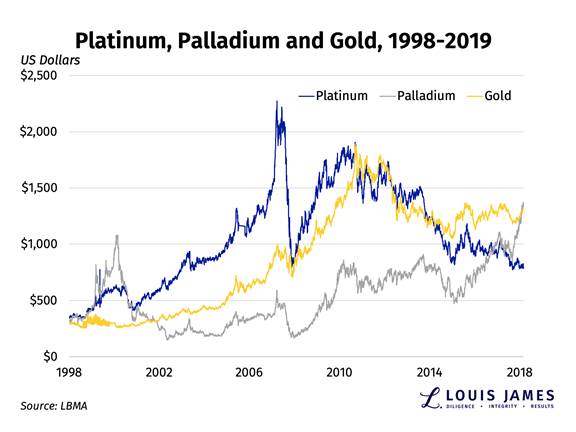 Now, as noted in recent articles, I have to admit that I missed the opportunity in palladium last year.

I’ve been right all along in seeing it as an industrial metal just like platinum. Demand for both is mostly for use in catalytic converters (pollution-control devices) in cars and trucks. Both work equally well on the exhaust of gasoline engines, but platinum works better at the higher operating temperatures of diesel engines.

What I didn’t see coming back in 2014 was dieselgate. When the Volkswagen emissions scandal broke in 2015, it changed demand trends for car engines. Consumers shifted away from diesel and toward gas—permanently.

I could see that happening, but I remembered that platinum works in gas engines too, and automakers had been slow to switch to palladium, even though it had been much cheaper since 2001.

Why? Because they’d tried before, in the late 1990s. Then, as now, most of the world’s palladium came from Russia. After the switch to palladium, Russian supply was disrupted, and palladium prices soared. As you can see on the chart above, carmakers switched back to platinum. Palladium tanked and stayed down, even when platinum prices soared, and the price gap between the two metals widened dramatically up until 2007. Carmakers were once bitten, twice shy.

Enter China. Increasingly, wealthy people in China started buying more and more cars. Given the pollution issues in China, it’s no surprise they prefer gas-powered cars over diesel. They’re also frugal enough to opt for the cheaper metal—and they aren’t afraid of doing business with Russia.

I had, in fact, been persuaded of this case for palladium years ago and wrote about it when I worked for Casey Research. But when I launched The Independent Speculator last year, palladium seemed to have already risen a great deal and be more likely to retreat. I was right about that—until last August when a supply shortage kicked in and sent prices much higher. 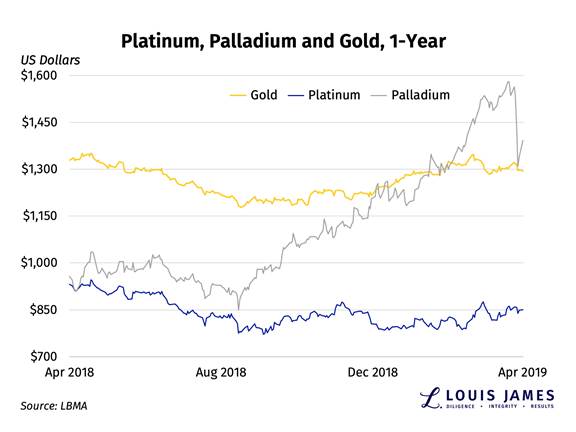 Now, in writing about why I think palladium has likely peaked, I said I think carmakers can switch from palladium back to platinum faster than most analysts seem to expect. The financial incentive is certainly there.

But does this mean that it’s now platinum’s turn to shine?

I don’t think so.

First, notice in the chart above that platinum prices did not surge at the same time that palladium prices tanked last week. This price data clearly does not show carmakers switching back to platinum.

This means that even if carmakers were already switching to platinum—something we don’t yet know is true—it would take a while for it to show up in prices. We might not see higher prices until well into 2020. Or we might not see them at all, if China just sticks with palladium until they go electric.

My friend Rick Rule likes to say that the cure for low prices is low prices. That’s true… as long as demand doesn’t go away.

One more thing: I’ve included gold on the charts above for reference. It is, of course, not just an industrial metal like platinum and palladium. It’s a safe-haven asset and a monetary metal. That’s why people say, “Good as gold!” and not “Good as platinum!,” and certainly not “Good as palladium!”

I bring this up because I wouldn’t expect either platinum or palladium to rise with gold in the case of a major economic slowdown putting fear rather than greed in the driver’s seat in the global marketplace.

In short, I wouldn’t touch platinum plays with a 10-foot pole until I see clear evidence of a shift in its fundamentals.

What am I buying instead? You’re welcome to sign up for my free Speculator’s Digest weekly email and track my take on various metals and commodities. I don’t make stock recommendations, but I do tell you what I’m investing in and why. And I promise not to bombard readers with a daily barrage of sales pitches with ridiculous headlines. Drop by IndependentSpeculator.com to sign up—it’s quick, easy, and free.