Greetings from glorious Squaw Valley, the snow depth in which is a great lesson for Gold to follow. Since our first strapping on the slats back here in '68 -- and in chatting with the ski patrol (who best know) during this present stint -- the snow level ski year-to-date is essentially an all-time high, as well ought be the price of Gold. Nearly 700 inches -- i.e. some 58 feet (17 metres) -- of the white stuff has fallen since November. And even at this late date in the season, the present snow pack across the area's upper elevations is a solid 19 feet.

Gold however -- despite six trillion Dollars having "fallen" via currency debasement over the last nine years -- finds itself today at the same price it first touched back on 22 September 2010, having settled out the week yesterday (Friday) at 1294. Moreover in adding insult to injury, snow eventually melts, but Dollars don't: they eternally accumulate toward accommodating more debt and derivatives.

Thus for the "buy 'n hold" Gold investor, one's had nine years of nuthin', the rise to all-time highs in 2011 and then back down notwithstanding. Worse is the case for Sister Silver: on that same date in 2010 she touched 21.20, the Gold/Silver ratio then being 61.0x. But the white metal settled out this past week sub-15, (for the first time since that ending 17 December), at a lowly 14.93, the ratio in turn now a whopping 86.6x.

Indeed as we move toward Gold's weekly bars, price is not only sulking 'round where 'twas nine years past, 'tis been stuck in recent weeks such as to not really record any net change: two weeks back Gold settled at 1297, then a week ago at 1296, and now at the noted 1294. The good news is that per the seven red dots of weekly parabolic Short trend, price rather than declining is instead poling along in a seemingly endless traverse across The Whiny 1290s. The bad news is that recent intra-week rallies keep getting snowed.

'Twas Gold's late winter of discontent, but with spring having since sprung, 'twould be nice to see the Shorts have their bell rung. And from the present price of 1294, Gold requires ringing up some 41 points to eclipse the rightmost red dot at 1335. That's a bit of a stretch given we've Gold's expected weekly trading range calculated at 25 points. But should this Short trend remain wimpy and the ensuing Long trend then kick in with the upside bent that the previous one did, we'll be talkin' "Hello Base Camp 1377" with our forecast high for this year of 1434 in the balance. Here are the bars:

'Course, the age old question is "What's the next impetus for higher Gold prices?" Beyond the ongoing 3Ds of Debasement, Debt and Derivatives by which Gold ought obviously be far higher than 'tis, the two most stark "in your face" impetus (which by denial nobody sees) are the extremely overbought stock market and ever-declining Economic Barometer.

Let's start with the S&P 500: as noted this past week in the website's daily "Prescient Commentary" the S&P by the most classic group of technical measures (ours being Bollinger Bands, relative strength and stochastics) is wildly overbought. But more dangerously remains the state of two haunting fundamental facts: 1) our "live" price/earnings ratio settled the week at 31.6x, and 2) the amount of dollars it takes to move the S&P one point has thinned even further from $911k on 29 January to just $474k today. Yes, we herein hammer away at this week-after-week, for eventually the Great Unraveling will out. Also, the engaging "pas de deux" we'd been witnessing between Gold and the S&P has seen the latter break it off into a "see ya dude" as depicted here by their respective percentage change tracks from one month ago-to-date (21 trading days): 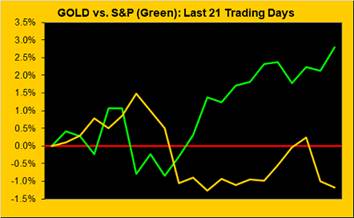 As for the falling Econ Baro, it did gain a modicum of relief this past week from March reports on rising inflation at both the wholesale and retail levels. 'Course, if the other measures don't keep up with inflation, then we've stagflation. For example: the month's Import Prices actually fell as did February's Factory Orders, and April's first sentiment read from the University of Michigan sagged. 'Tis the current bent of the Federal Open Market Committee to cease increasing their Bank's Funds rate; and when rescissions to their rises kick in, watch for Gold to really become "IN". Meanwhile, here's the no-gas Baro and the wild-ass S&P:

Now as we turn to the two-panel graphic of daily bars from the last three months-to-date for Gold on the left and for Silver on the right, the fallout of their respective baby blue dots of linear regression trend consistency has in both cases rather hesitated than accelerated, albeit the noted state of Sister Silver is the worse for wear. But give or take a few points either way, both precious metals are today priced right 'round where they were in early March, (recall last week's missive entitled "Gold's Down Trend Continues; Except That Price Isn't Going Down"). However, with both sets of "Baby Blues" below their 0% axes, the 21-day price trends technically are down: 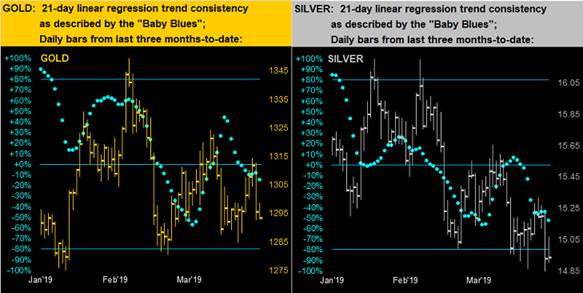 As for the 10-day Market Profiles for Gold (below left) and for Silver (below right), we again see the dominant trading prices just where they were depicted a week ago: 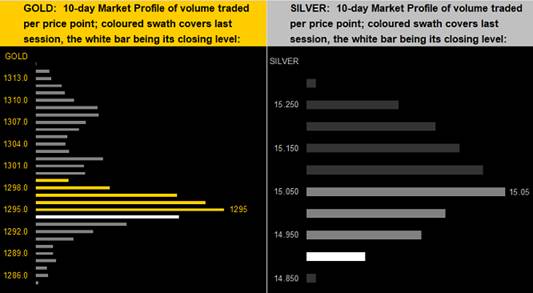 Time to wrap it from here in the high country. As we peek into next week there are 14 metrics due for the Econ Baro, plus on Wednesday (17 April) we get the Fed's Tan Tome on the regional state of economic conditions across the US. Shall Gold keep getting snowed? Or instead break above its Neverland mode? With the likes of this past week's stock market headlines such as "This Bull Market Has No Expiration Date", the contrarian knows 'tis over. So don't get snowed; ski for the Gold!