Key Message from IMF for the Gold Market

The Spring Meeting of the World Bank and the IMF, during which the latter organization released its fresh World Economic Outlook, has just ended. What are the takeaways for the gold market?

Stagnation or Acceleration after the Slowdown?

In Thursday’s Gold News Monitor, we pointed out that the IMF significantly cut outlook for the Eurozone’s economic growth this year from 1.6 to 1.3 percent. But what about other economies? The IMF forecasts now 2.3 percent rise in the American GDP, 0.2 percentage point slower than it was projected in January. Global growth is now projected to be 3.3 percent, a downward revision from the 3.5 percent forecasted three months earlier. After such cuts in world economic outlook, gold should shine, shouldn’t it?

Well, not necessarily. You see, investors have already acknowledged the current economic slowdown. The key question for the markets is whether global growth will accelerate or stagnate from this point onward. As we wrote in the latest edition of the Market Overview, we believe that the slowdown will prove short-lived. And this is exactly what is forecasted also by the IMF: “with improvements expected in the second half of 2019, global economic growth in 2020 is projected to return to 3.6 percent.”

The reason behind our view is the recent stimulus in China. The monetary and fiscal stimuli started in December and we see the effects now. Credit growth exceeded all estimates in March, and the manufacturing sector unexpectedly return to growth, while service sector activity accelerated. Importantly, last month, Beijing announced billions of dollars in additional tax cuts and infrastructure spending on top of measures last year. So, even if we do not see a return of a boom, the current global slowdown is not likely to morph into a recession. Whether gold bulls like it or not.

Another important factor here is the shift away from tighter monetary policy by central banks. In particular, the Fed has changed its view that low unemployment rate will have to spur inflation – rather, due to global competition and technological progress, low inflation rate may stay with us for longer, so there is no need for aggressive tightening. A more dovish Fed – and the resulting downward pressure on the real interest rates and the US dollar – should support the gold prices.

Moreover, trade tensions has somewhat eased – at the Spring Meeting of World Bank and the IMF, U.S. Treasury Secretary Steven Mnuchin said that he was hopeful the U.S. and China are “close to the final round” of trade talks.

Last but not least, the EU has postponed the deadline for Brexit until the end of October, raising the odds of orderly divorce. And the British politicians seem to be approaching the customs union compromise, which would not be as harmful as the hard Brexit. If these two big risks – i.e., full-blown trade war and chaotic exit of the UK without a deal – don’t materialize, the risk appetite among investors may increase, which could hit the safe havens such as gold.

The key message from the IMF’s Spring Meeting and its recent World Economic Outlook is that there will be a significant growth slowdown this year. However, some of the idiosyncratic factors and uncertainties weighing on growth are waning, while central banks and government are adopting more accommodative policies. Here, we expect the current slowdown to be temporary and followed by a rebound in the second half of the year.

What does it imply for gold? Well, the slowdown combined with a more dovish Fed are key factors which could make 2019 a better year for gold than 2018. The rebound in growth could be, conversely, negative for the gold prices.

However, although the US GDP might accelerate later this year, the pace of economic expansion is projected to be slower than last year when fiscal stimulus spurred growth. And the IMF forecasts it to decline further in 2020, as the chart below shows. The convergence between the US and Europe’s economies should ease the upward pressure on greenback and support gold. 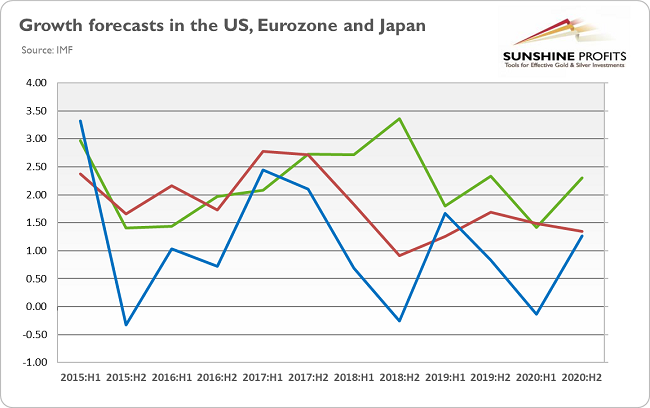 Indeed, if we see a revival in the Eurozone, the euro may strengthen against the greenback, which would also be supportive for the gold prices. After all, the current slowdown did not make the yellow metal to rally because it was concentrated mainly in Europe.