Do you remember "When E. F. Hutton talks, people listen"? Decades later, today we might say: "When Goldman opines, it goes online" ... or something like that.

Arguably, Goldman Sachs ("GS") is the most revered of all Wall Street investment banks. And without actually scoring at home, we've sensed their inexhaustible prognostications to pass muster a good 50% of the time, (whilst churning their managed portfolios to yield fees 100% of the time, notwithstanding the firm's common shares having taken a 42% hit during the course of 2018). But we digress. Let's get to the point.

What do we know about Gold? Obviously 'tis a precious metal and de facto the purest form of money in the history of humanity. And in looking online per Bloomy, for the second half of 2019, GS is pushing Gold as a Long.

What do we know about Copper? Obviously 'tis an industrial metal with extensive uses ranging from carrying electrical current through just about everything to being a core material whether constructing storage shacks or building the biggest and brightest of the world's skyscrapers. And in looking online per Bloomy, for the second half of 2019, GS is also pushing Copper as a Long.

What do we know about Silver? Like Gold, Silver is money. Like Copper, Silver is extensively used for alloys, catalysis, chemical equipment, electronics, jewelry, medicine, nanoparticles in solar cells, and so on. We find Silver adorned in either her precious metals pinstripes, else her industrial metal jacket. Over the years we've even quipped that were one to put Gold and Copper in the Osterizer and press "purée" the result shall be Silver. So: Long Gold and Long Copper. But in looking online per Bloomy, for the second half of 2019, GS is pushing Silver as a Short.

Just as if in our schools these days should little Johnny think one plus one equals minus one, then that's ok. (Go figure).

Further, the Gold/Silver ratio remains stuck in the historically-high zone of the 80s, now at 85.7x to be precise. But is the aforementioned investment bank thinking we'll be seeing 90x? 100x? (Don't discard your Silver dimes!) Here's that ratio by the day, millennium-to-date: 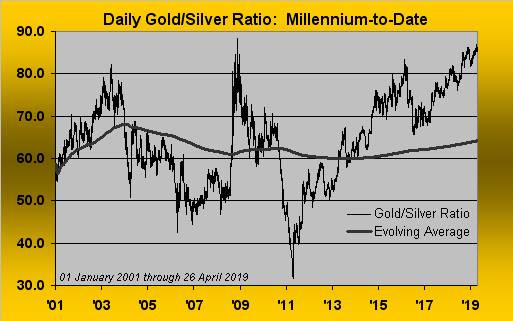 What is not going quickly, (or really anywhere), is Gold's decline within the context of the present parabolic Short trend as we next see in turning to the weekly bars from a year ago-to-date. In fact, Gold not only netted a gain for the week, but through the now nine weeks of the red-dotted Short trend, price has actually finished up in four of them, and is now back above the purple bounds of The Box (1280-1240). 38 points up the road is the 1326 level which need be eclipsed to flip the trend to Long, albeit Gold's "expected weekly trading range" is only 24 points. But the downside acceleration of the red dots has increased to five points/week such that should Gold stay buoyed, the squeeze ought soon ensue: 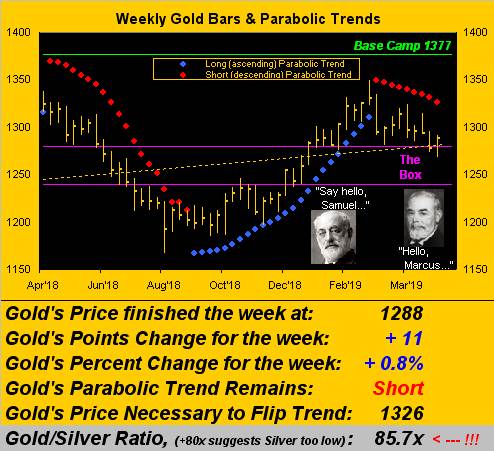 Moreover by the daily chart, Gold has netted a gain for each of the past four trading sessions. 'Course being only barely down from where 'twas a month ago (1295), Gold per usual remains off the radar as compared to the stock market, the S&P 500 yesterday reaching 2940, a mere point away from its all-time high of 2941 of last 22 September (which may be taken out in a heartbeat in the new week) and up 4% from a month ago. At such rate of ascent, the S&P would hit 10,000 in December 2021, a mere year into President Trump's second term. Then extrapolate the average Q1 earnings improvement (with not quite half of the S&P's constituents having reported) of just a wee +0.4% over that of a year ago, and you shan't have enough rungs on your abacus to calculate the price/earnings ratio, given "∞" = infinity. To reiterate from last week: "...history shows the S&P crashes from P/E ratios as high as is our current 'live' reading of [now] 31.9x..." Here are the percentage tracks from a month ago-to-date for both Gold and the S&P:

Also as pointed out a week ago, (and hardly for the first time), the S&P 500 (at least since 1998) directionally reverts to this next graphic's positioning of the Economic Barometer. That's about a 500-point skid from here. As to our call for a full 27% correction from the S&P's noted all-time high down to 2154, 'tis still "Game on!". For as we wrote to a few folks this past week:

What did increase for the Econ Baro itself was the upside "surprise" of +3.2% annualized growth in the Q1 Gross Domestic Product reading. 'Course, the headline numbers initially drive market emotion; the hidden numbers later result in reality. For example, Q1's "Chain Deflator" to account for inflation was only +0.9%, (half the 22-year average of +1.8%) suggestive of demand being rather mushy. Here's the Baro:

Now let's go 'round the horn for the entirety of the BEGOS Markets. These are their daily bars for the past 21 trading days, (i.e. from one month ago-to-date). At first blush, the only two markets with ascending trendlines are Oil and the S&P ("SPOO"). But then zoom in on the "Baby Blues" which denote trend consistency: those for Oil have just ratcheted down, to say nothing for price itself which really lurched lower into week's end. And as for the "safe havens" of the Bond, Gold and Silver, the blue dots turning up mean the respective price downtrends are losing consistency as buyers come to the fore: 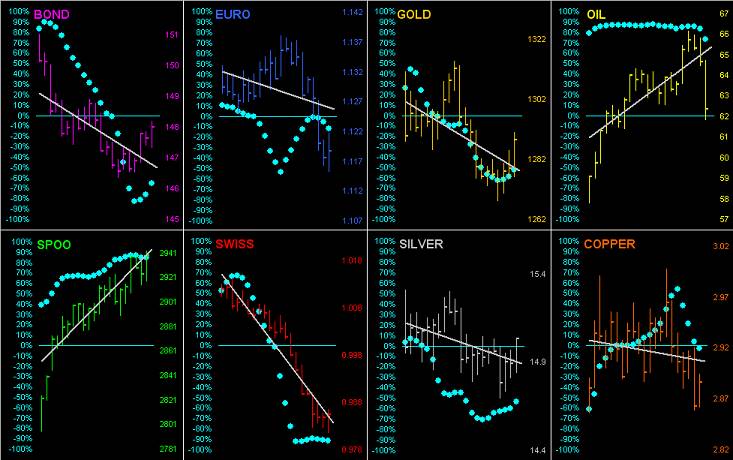 Finally, we've the precious metals 10-day Market Profiles for Gold on the left and Silver on the right. And what we really like therein is Gold's having sprintingly hurdled the 1278 level toward testing the underside of The Whiny 1290s. In fact if you read the daily Prescient Commentary, we've an "aggressive" Market Rhythm Target ("MRT") for 1302.3 given Thursday's positive crossover in the 12-hour Moving Average Convergence Divergence study, (the "conservative" MRT for 1289.3 having quickly been met yesterday). As for Sister Silver, she's regained (however fragile) the 15 handle, in spite of the GS call toward "Short":

Next week is BUSY! No less than 20 metrics come into the Econ Baro, the input being numerous as finally there shall be delayed (gov't shutdown) reports on February's Personal Spending and that month's Personal Consumption Expenditures Index, plus readings of same for March along with its payrolls picture. And the week's centerpiece is the 01 May (not a Stateside holiday) policy decision from the Federal Open Market Committee: a wee rise in rates would wreck it all; we thus expect nothing from that cabal. As for Long Gold ... but Short Silver? Fawgit about that BS from GS! Own 'em both! 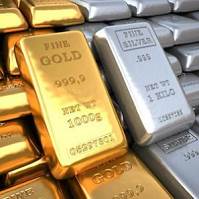