In a sense in sequel to that which we penned a week ago ("Gold Sits On Its Box Whilst The Herd Chase Stocks"), Gold remains lifeless as another week passes, although the balance of the herd finally is paying the price for overdosing on their stocks vice.

Gold for its sixth consecutive trading session settled yesterday (Friday) in the 1280s at 1287. The prior five closes back through a week ago were 1285, 1282, 1286, 1282 and 1280. Gold's "expected daily trading range" is now just 10 points and the "expected weekly trading range" down to a lowly 23 points, essentially the narrowest in at least the last five years. Comatose indeed has become our Gold.

So in again quoting Dean Martin per the namesake of the '62 film "Who's Got the Action?" --(Paramount Pictures), here's the answer: the Bond, Copper, Oil, the Swiss Franc (remarkably sans Gold), and stocks as measured by the S&P 500. All five of these BEGOS Markets are seeing their trading ranges expand. And as for performance, the S&P just put in its worst week of 2019 with a 2.2% decline (-64 points). Overdosed indeed became the herd on the S&P.

'Course as is widely being reported, the demise in stocks is solely due to increasing from 10% to 25% the StateSide tariff on some $200 billion worth of goods imported from the People's Republic of China. Nothing to do with the S&P 500 remaining vastly overvalued per our "live" price/earnings ratio of 30.4x (as identically at present is Bob Shiller's cyclically-adjusted p/e); nothing to do with the still frothy nature of needing just $360k to move the S&P one point, (the year-to-date average being $649k); nothing to do with (as we herein saw a week ago) the S&P then year-to-date being unsustainably +17.5% through just four months. Nope. Tariffs on China is the catalyst to finally sell stocks, (and some might politically opine, another chance to get Trump).

Fact is, because "Serious Investors Read Barron's", you already know all this. Here's a portion of their intelligentsia blasts from the few days just past:

■ Dow Falls 338 Points Because There Is No Urgency on Trade

Meanwhile, the good news given Gold's comatose state is price's inability to fall despite the weekly parabolic Short trend having now completed its 11th week. As we below see per the rightmost bars, price remains pretty much perched upon the top of The Box (1280-1240) as if on a fence, inefficiently watching the financial world gyrate in all directions: 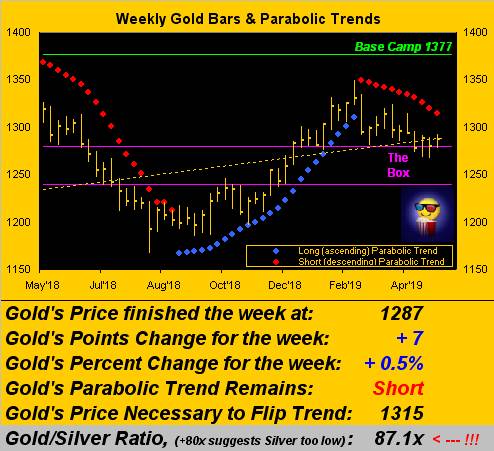 "But, mmb, with all this 'gyrating', what's it gonna take to move gold up?"

Squire, that is basically is the question of the last several years. One thing we've learned about Gold with respect to geo-political events such as this China tariff tiff, price will swiftly rise ... and then within days come back down to where 'twas pre-event. Thus perhaps the Gold trader of today has become wise to that. Rather, at the end of the day as has always been given the foundationless modern monetary case, Gold shall eventually catch up to currency debasement. 'Tis what is does. 'Twill so again do. Just don't be caught out when it does so anew.

Which brings us to our broad view of Gold by its daily closes since the highest ever at 1900 on 22 August 2011. And really from 2016 onward, the chart suggests the rampant selling from 2011 through 2015 has long been completed, that price since is simply basing with an upside bias, and given the bazillion factors working in Gold's favour (the most notable being the Gold Scoreboard's valuation for price to be 2864 right now), rationale points to Gold's taking off. To wit:

Are the sovereigns selling? No. Are the hoarding bunkerneers dumping? No. Is China buying? They're on a spree. So is India. And if amongst your activities whilst scoring at home you've linearly projected the StateSide money supply by its M2 measure, you find it crossing above the $15 trillion milestone in late March of next year, (or even sooner should Quantitative Easing resume ... on verra). Taking all of that into account, here's the graphic, highlighting its key nearby levels, the most important of course being the green line at Base Camp 1377:

As for the Economic Barometer, although its inputs for last week were few, they were enough to tip the trend lower once again. April's inflation readings at both the wholesale and retail levels markedly softened. Moreover, March's Consumer Credit fell by the most for that month since 2013. No credit? No consumin'. Here's the Baro:

Now as comatose as Gold may seem, we see a couple of technical positives in turning to our two-panel display of price's daily bars for the past three months on the left and the 10-day Market Profile on the right. First, there's Gold's "Baby Blues" which in their current climb have nearly reached the 0% axis, meaning that the consistency of the recent price downtrend has virtually vanished. Second, per the Profile there is fat trading support in that 1285-1283 apex, the wee safety net being below at 1273:

But as seems usual for Silver, her case is not as robust, hence the Gold/Silver ratio at this writing being nearly at an historically high reading of 87.1x. Per Sister Silver's "Baby Blues" (below left), although the downtrend's consistency is breaking apart, the dots are messy at best. And by the Profile (below right), unlike the yellow metal sitting above trading support, the white metal finds herself below the 14.95 resistor:

In sum, comatose Gold had barely moved in the stack since 'twas last presented three missives ago:

Gold's Value per Dollar Debasement, (from our opening "Scoreboard"): 2864

Trading Resistance: none (per the 10-day Market Profile)

Next week brings a bigger dose of data for the Econ Baro, notably including a consensus drop for April's Retail Sales, (no surprise given the aforementioned drop in March's Consumer Credit). And weaker economic data is supposed to be positive for Gold. Does it thus awake from its comatose state?