The Monetary Cause of Lower Prices, Report 12 May

We have deviated, these past several weeks, from matters monetary. We have written a lot about a nonmonetary driver of higher prices—mandatory useless ingredients. The government forces businesses to put ingredients into their products that consumers don’t know about, and don’t want. These useless ingredients, such as ADA-compliant bathrooms and supply chain tracking, add a lot to the price of every good. Of course higher prices are reflected in the Consumer Price Index. And people say it is inflation.

We have also discussed a nonmonetary driver of lower prices. Every productive business is constantly working to remove useless ingredients too. They are not allowed to remove government-mandated useless ingredients, but all other ingredients are open season. In the research for his Forbes article on falling wages, Keith discovered that dairy producers found ways to eliminate 90% of the ingredients that go into producing milk between 1965 and 2012. For example, they reduced by two thirds the labor hours that support each cow.

Today, we look at the monetary driver of lower prices. Wait, what? Monetary? Lower prices?! Doesn’t monetary policy increase the quantity of dollars? Shouldn’t that cause prices to increase?

All the while, you can be sure that the US Congress, plus state legislatures from Sacramento to Albany, and thousands of City Halls, were busy creating new costs for businesses to pay, not to mention new taxes. Governments at every level were driving up prices. Despite this relentless onslaught, prices rose only about 1% a year. We do not have data to quantify it, but we know it was, and is still, going on in a big way.

Some other countervailing force must be at work, else prices would have risen much faster. Last week, we wrote of one such force—the drive to reduce what business managers call waste.

This week we write about a monetary force. It is not “in spite of” the increase in the quantity of dollars. There is one monetary effect today, and it is pushing prices lower.

That may seem to be an outrageous claim, but let’s look at it light of our model that cost of production is the sum of the cost of all the ingredients:

What about interest expense?

Consider the example of Acme Corporation, which manufactures dynamite for the large and important coyote market, as well as plungers, coiled wire, and boxes marked “bird food”.

Acme has installed a state-of-the-art computer-controlled production line. Of course, it finances the cost. Acme sells a bond at 8%. That means, if the line cost $10,000,000 then Acme is paying $800,000 a year in interest expense. This is spread over the number of units Acme manufactures in a year. If it makes 1,000,000 units of dynamite, then the interest expense adds $0.80 to each unit.

Interest expense is added to the product cost in another way. Inventory must be financed, from purchase of raw materials to finished goods prior to sell-through in the market. Let’s assume that there is $1,000,000 of work-in-progress at any given moment. And also that the interest rate is the same (it would likely be lower), to keep this example simple. Then Acme is spending an additional $80,000 a year in interest.

The interest expense added to each package of dynamite is $0.80 + $0.08 = $0.88. If Acme sells dynamite at $10, interest is 8.8% of their gross revenues. We don’t know much about the dynamite manufacturing business, but that sounds like a pretty big ingredient.

What if there was a way to eliminate it?

Suppose the central planners pushed the rate down to 4%. R+R Inc. can put in the same manufacturing equipment. But they pay only $0.40 per unit in interest expense, and incur only $0.04 interest to finance the inventory.

R+R’s cost is $0.44 below Acme’s cost. Therefore R+R can afford to cut its price below where Acme can profitable sell dynamite. Of course, if R+R offers dynamite at $9.56, then Acme can either match that offer or sit on the sidelines, as Wiley and his brethren buy from R+R. Acme must match it.

Of What Value Is Interest?

The final question: are interest and margin useless? Clearly, removing them causes a reduction in consumer prices. Many would say that whatever lowers consumer prices is good, because the only thing that matters is boosting consumption as much as possible. We agree that lower consumer prices causes increased consumption. But it’s the first part that troubles us.

The rentier is not, as Keynes asserted, “functionless”. In this claim, he makes two mistakes. One, he overlooks the function of capital allocation. Two, he ignores the function and requirements of capital itself. By saying that the owner of the capital does not deserve a return, he forecloses on any discussion of whether capital must be maintained. He—and all socialists—evade the fact that capital must be replenished. If not, then it decays into functionless material, like a rusted machine that seizes up.

The entrepreneur is not functionless either. He is the one who sees a way to solve a problem, to provide a new good or service. His profit is the net difference between his cost of ingredients and the price paid by his customers. If government policy seeks out and destroys his profit margin, it is not serving anyone—including the consumers they profess to help.

A whole treatise could be written on the contribution of the entrepreneur. Suffice to say here, that without him, homo sapiens would still be living in subsistence, in small hunter-gatherer tribes.

The price of gold up a few bucks this week, but the price of silver was down ¢16.

The stock market dropped 2% (S&P) this week, with some volatility (e.g. a big rise of 60 points, about 2%) starting around noon in New York.

Everyone is waiting with baited breath for the collapse in the stock market. Some do so, in the belief that what goes up must come down. We think this is too fatalistic (if not cynical). We do not believe that human productivity and ingenuity must turn to ruin.

Those who have studied the Austrian Business Cycle Theory, see the bust as the inevitable consequence of the false Fed-fueled boom. Sears recently borrowed another big chunk of cash to fuel its chronic losses. We can only imagine how many others have been doing the same. And we await the next update from the Bank for International Settlements zombie debt chart, last at well over 10% of all corporate debt outstanding (a zombie is a creature of too-low interest rates, and has profits < interest expense).

This mad era of borrowing to consume will end, and it will end badly. The only thing we don’t know is when. The stock market looked wobbly this week, though it has had this wobbly look before and continued its seemingly infinite trend of higher prices and lower yields. This week’s wobble was (nominally) driven by Trump’s tariff threats. So it is possible that he will backpedal, and if so, it is possible that the stock market will resume its path towards Keynes’ euthanasia (i.e. yields falling to zero, which is the same as price going to infinity).

Anyways, let’s look at the supply and demand picture of gold. But, first, here is the chart of the prices of gold and silver. 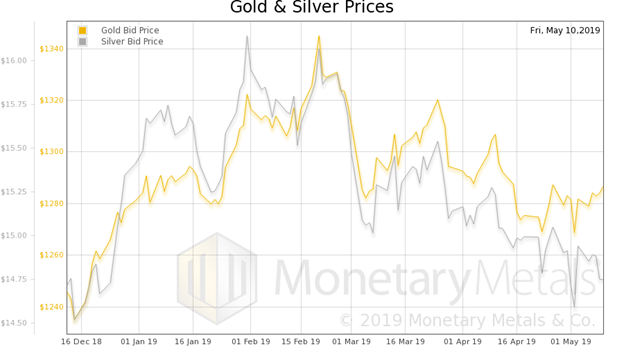 Next, this is a graph of the gold price measured in silver, otherwise known as the gold to silver ratio. The ratio rose, to a new high over 87. 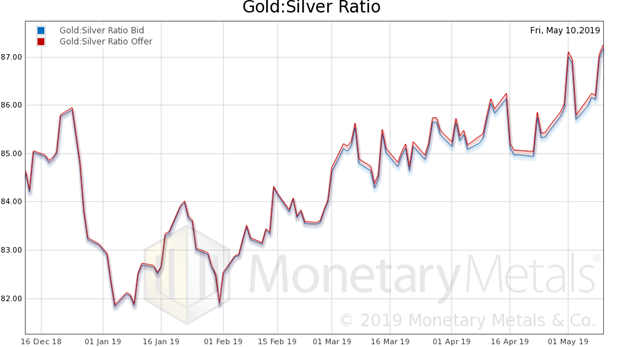 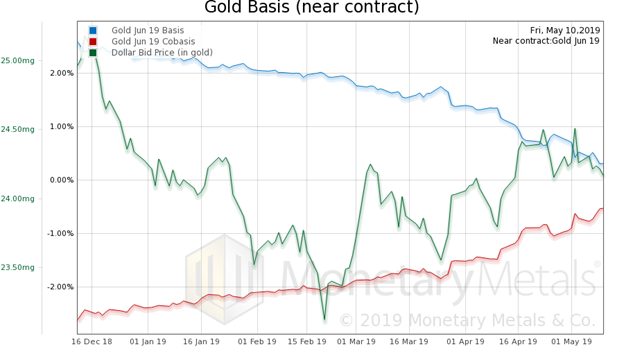 The scarcity (i.e. cobasis) rose a bit, but this is the soon-to-expire June contract. The gold basis continuous, not so much. 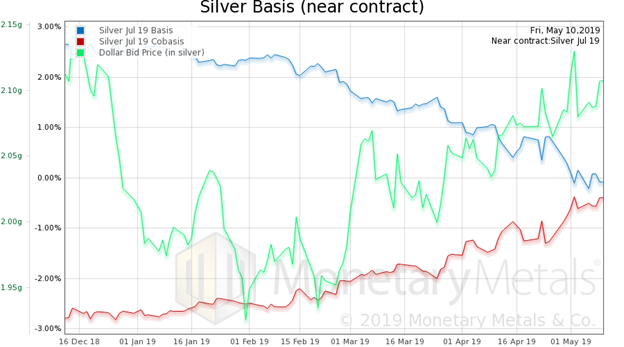 The scarcity of silver (i.e. cobasis) increased, but not a lot. Especially not in light of the drop in price.

The Monetary Metals Silver Fundamental Price was down 26 cents to $15.59.