Will the Transitory Inflation Turn into a Tailwind for Gold?

Chair Powell claims that subdued inflation is caused by transitory factors. Does the recent data confirms his views? And just how transitory is the new tariff rate on $200bn Chinese imports? Will we see a creep higher in inflation about to lift the gold prices?

At the post-FOMC press conference in May, Jerome Powell said that some transitory factors could be responsible for muted inflationary pressure. The latest data seems to support his view that the recent slowdown in inflation was temporary.

Indeed, the CPI rose 0.3 percent in April, following an increase of 0.4 percent in March, the government said on Friday. Meanwhile, the core CPI, which excludes food and energy prices, increased 0.1 percent for the third month in a row. Although the monthly numbers do not portend a revolution, April marks another month of a sizable increase in inflation.

Hence, we see a less volatile uptick in annual inflation rate, which is much more interesting for the policymakers. So, over the last 12 months, the consumer prices increased 2 percent, compared to 1.9 percent increase in March. Although it is well below last year’s peak of 2.9 percent, it’s the highest rate since November 2018. What is also important, the index for all items less food and energy climbed 2.1 percent, an uptick from 2 percent in March, as the next chart shows. It means that the increase in the annual CPI rate was caused not only by the higher energy prices. 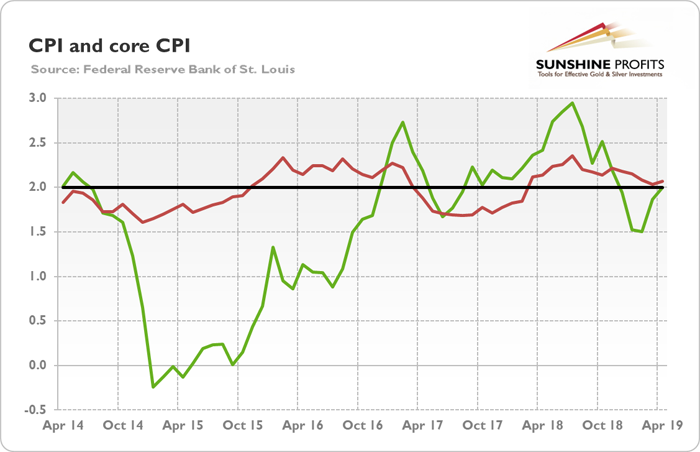 As one can see, inflation remains near the Fed’s 2% target. The analyzed uptick in inflation is too small to change the Fed’s stance on monetary policy. As long inflation remains contained despite the record low unemployment rate and very tight labor market, the US central bank will remain patient in raising interest rates.

However, the recent low inflation readings might be temporary. This means not only that the Fed will not cut interest rates, but also that it may deliver another hike later this year if inflation edges a bit higher in the coming months.

One argument is that the Producer Price Index has rebounded since the winter. Another issue is that when the asset prices declined, the prices of some financial services, included in the CPI, also dropped. But when asset prices go back up, there will be a predictable rebound. Moreover, Trump raised tariffs from 10 to 25 percent on $200 billion in Chinese imports on Friday. We cannot exclude that the tariffs might eventually spur some inflation. Last but not least, the government has changed its methodology of calculating the prices of apparel and later the prices of clothes as well. Hence, the true inflation might be actually higher than it appears to be, or it can increase somewhat later this year.

So, implications are simple, aren’t they? Subdued inflation means subdued gold, which is an inflation hedge, while higher inflation would mean higher gold prices, right? Not so quickly. Let’s look at the chart below, which shows the gold prices and the inflation rates over the last ten years. As one can see, there is generally a positive correlation between these two series. 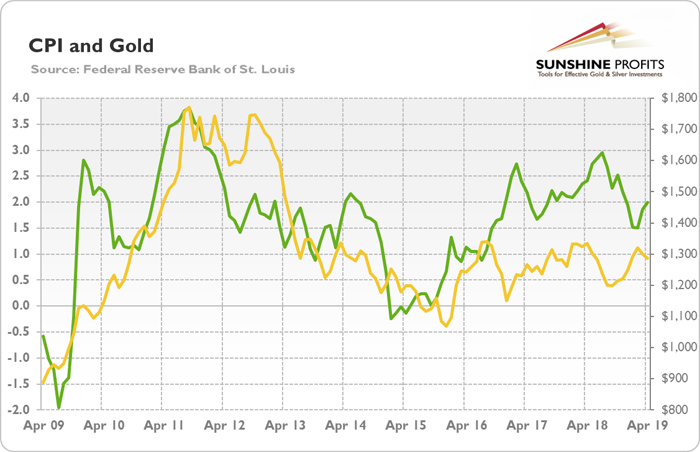 However, the standard relationship broke down in 2016 and gold become slightly negatively correlated with inflation. The reason behind that change is the Fed’s reaction function. Higher inflation implies more hawkish Fed, while softer inflation means more dovish Fed. Hence, the subdued inflation is not really a headwind for gold, while the stronger price pressure will not necessarily support the yellow metal, especially if it forces the Fed to adopt a more hawkish attitude and if it prompt traders to adjust their expectations of the future interest rates.