Oreninc Index Up As Financings Break Through C$100 Million 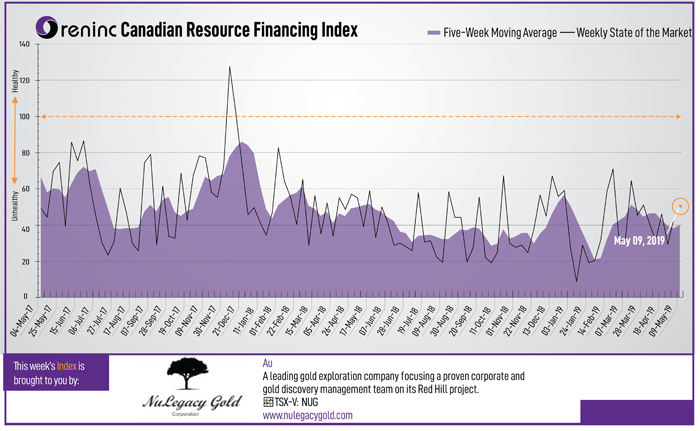 ORENINC CEO Kai Hoffman was something of a media celebrity recently week recording TV interviews with Kitco and BNN Bloomberg. Here are the video links:

A slightly better week for gold as the clouds of an approaching trade war between the USA and China continued to gather as president Donald Trump boosted tariffs on US$200 billion of Chinese imports from 10% to 25% as he seeks to strongarm concessions out of China as trade talks continue.

Elsewhere, North Korea continued to undertake rocket tests and the apparent threat of Iran has required the USA to send a carrier fleet, Patriot Missile system and B52 bombers to the Middle East. Yet despite all this apparent geopolitical risk, gold barely shrugged its shoulders.

This week also saw the long-awaited IPO of ride hire service Uber (NYSE:UBER). It raised US$8.1 billion selling 180 million shares at $45 each, towards the bottom of its forecast range and initially valuing it at around $80 billion. But it lost 7% the next day, dropping its value to $70 billion.

A great week for football (soccer) fans as the semi finals of Europe’s two main competitions produced four stunning games, with English teams winning all four. This is the first time ever that one country has provided all four finalists.

Nevada Copper (TSX:NCU) opened a C$40.02 million offering underwritten by a syndicate led by National Bank Financial and RBC Capital Markets acting as joint book-runners, and including Scotiabank as co-lead underwriter on a best efforts basis.

Work at Pino de Plata was directed towards understanding the mineralization in order to further refine the upcoming drilling program, with eight targets identified for drill testing, each of which has outcropping mineralization. Silver Spruce is permitted to drill 30 holes during the phase I and phase II drill programs, with 12 holes for 2,000m planned for phase I. The amount of geological information collected to date means the company is quietly confident of obtaining positive results and drilling will provide a stream of news over the coming months.