Gold prices initially dipped through trend line support during the North American trading session but rebounded into the close of the session to settle near the highs. Prices were under pressure as the dollar continued to gain traction testing the 98.13 level on the dollar index. The drop came despite lower US yields, following Tuesday US existing home sales.

Gold prices continued to move lower on Tuesday but rebounded to close the trading session just above support. A close below an upward sloping trend line that comes in near 1,273, could lead to a test of the May lows at 1,266. A break below this level would lead to a test of the December 2018 lows at 1,237. Resistance is seen near the 10-day moving average at 1,285, and then the 50-day moving average at 1,290.

Medium term momentum has turned negative as the MACD (moving average convergence divergence) index generated a crossover sell signal. This occurs as the MACD line (the 12-day moving average minus the 26-day moving average) crosses below the MACD signal line (the 9-day moving average of the MACD line). The MACD histogram also generated a crossover sell signal as it fell through the zero index level which reflects accelerating negative momentum. The fast stochastic continues to move lower which also reflects accelerating negative momentum. The current reading on the fast stochastic is 27, which is still above the oversold trigger level of 20. 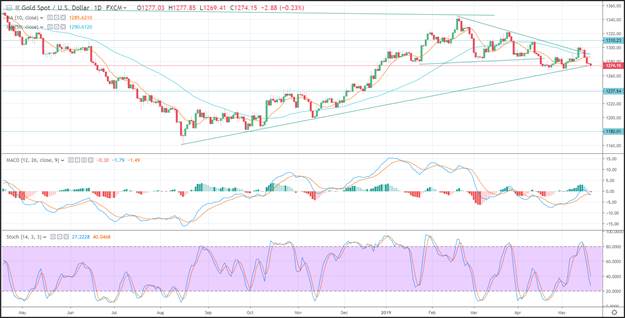 The National Association of Realtors reported on Tuesday that US home sales fell 0.4% in April on a month over month basis. Sales are now down4.4% year over year. According to the NAR, this was the 14th consecutive decline on an annualized basis. The US 10-year treasury yield which is the benchmark for mortgage rates, dropped 30-basis points in March, which led to a sharp rebound in existing home sales. In April, treasury yield increased by 9-basis points which led to slightly lower sales.

The article was written by David Becker, FX Empire