Will Millennials Ever "Get" Gold?

A lot of the nonsense brought up by the #dropgold marketing campaign for Bitcoin, such as the claim that gold has no utility, is so clearly false, it’s tempting to just ignore it. To the degree that the gold industry and investors respond in public, the campaign achieves its goal: publicity. The silent treatment would serve its perpetrators right.

But there’s a problem with ignoring falsehood. Roy Sebag eloquently sums this up in his thorough rebuttal of the #dropgold campaign:

“I abhor the phenomenon of bad information spreading its way into public markets, and feel a responsibility to rectify the public record when I identify a didactic void.”

Sadly, the bad info is spreading anyway. Its falsehood is obvious to people who know anything about the subject—but so few people do. And though false, the presentation is effective. The #dropgold video is funny to those who know no better. It’s just the sort of thing Millennials love to share and share until it “goes viral.” This gives bad info a very long of reach.

On the bright side, it’s hard to imagine anyone who owns any gold being persuaded to drop it by this collection of error and distortion.

As for the typical Millennial or younger person who might be persuaded without much thought, well, they don’t have much gold to drop. I don’t see this impacting the price of gold at all.

Why bother with the campaign then? To rile up the gold community, of course. That enlists their unwilling help in promoting Bitcoin. “Any press is good press.”

Is there no hope, then—will Millennials put an end to gold’s more than 4,000 years of service as money?

From Keynes’ dismissal of gold as a “barbarous relic” to Warren Buffett’s myopic assertion that gold is useless, we’ve seen smear campaigns before. None has made any material difference.

The truth is that gold does have many uses. This includes, as others have pointed out, its use in the electronics used to mine Bitcoin.

At the end of the day, reality matters, and the fact is that gold is valuable.

Beyond that, I don’t think it’s true that Millennials will never “get” gold. In fact, they’re quite used to the idea of gold being tangible value. It’s deeply entrenched in most cultures around the world. It’s in our movies and books. It’s in our wedding rings and gifts.

And gold is used as money in many of the games Millennials play.

In Blizzard Entertainment’s massively popular Diablo franchise, for instance, gold is the only form of money used in the games. 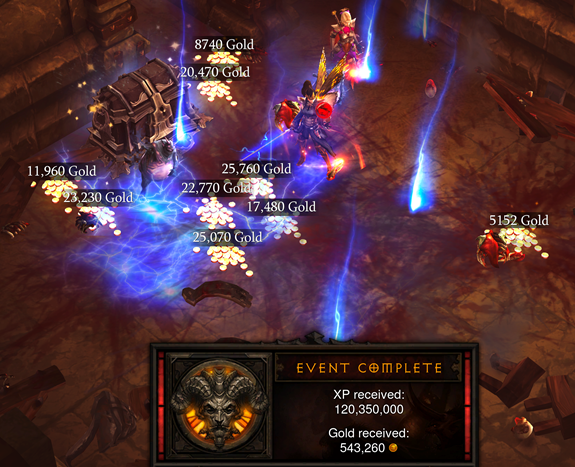 A Diablo player scoops up gold after completing a quest to kill monsters. This gold can then be spent in the game buying new weapons, repair armor, and much more.

Even in some games that call their in-game currencies something else, like Phantasy Star Online (one of the first smash hits among online games decades ago, which is still played by a cult following), the “meseta” currency is gold-colored. It’s possible that young people spend more time using gold as money in their gaming than they do using fiat currencies in real life.

Even Bitcoin itself is commonly depicted as a gold coin with tech-type decorations.

So no, I’m not worried at all that young people will never see the point of gold.

But at the same time, the crypto craze is destroying faith in fiat currencies among younger people. They do get the implications of infinite money printing. Bitcoin’s “inflation-proof nature” is one of its main selling points.

It may well be that when all is said and done, it’s paper money that gets dropped, not gold.

And what happens if that takes place at a time when Bitcoin 2.0 is knocking the stuffing out of Bitcoin? Or when some major exchange like Coinbase gets hacked and billions of dollars of cryptos get stolen in a fraction of a second?

We could see gold—the most enduring form of money the world has ever seen—go sky high. And if so, I’d expect my gold stocks to go to the moon.

But I’m not counting on gold going vertical. It might, but I own gold for prudence. It’s physical wealth I can hold in my hand. It’s value with no counterparty risk. It has saved my family from financial trouble in the past, and that’s why I hold it for the future.

P.S. If you agree with me and would like to see my take on more things, please sign up for my free, no-spam weekly digest. It frequently contains original analysis not published anywhere else.