To wit this bit from last week's missive:

"...[Gold's] trend could well flip to Long within just a week's time simply through normal trading oscillation: the distance from present price (1284) to parabolic (1306) is 22 points; Gold's 'expected weekly trading range' is at present 23 points..."

And (with a little drum-roll please)

that's what happened: Gold's weekly parabolic trend has just flipped from Short to Long, price settling out the week yesterday (Friday) at 1310, albeit aided (and if you like, abetted) by five added

points as trading volume moved from the June contract into that for August. Too much information perhaps, but 'tis what 'tis. Gold's net gain for this past week of +2.0% was its best since that ending 07 December. Straightaway, here's the picture and then we'll assess some reasonable upside expectation awaitin' in the wings: 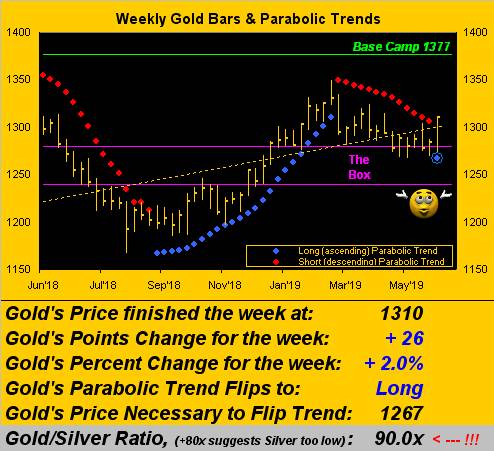 Such begins Gold's 17th weekly parabolic Long trend since price printed its All-Time High at 1923 on 06 September 2011. The burning question is thus: how much upside have these Long trends actually produced? Answer: the average maximum upside (which rarely is accurate as an imminent case's reality) for those prior 16 Long trends is +7.5%. Were that to precisely pan out on this new run, we'd see price ascend to 1408: which would be great as 'twould near our "conservative" forecast high for this year of 1434. 'Course, the real challenge in getting that far is in first retaking Base Camp 1377, which from here at 1310 necessitates a rise of +5.1%. Doable? Of course, but 'tis hardly baked in the cake: in those prior 16 Long trends, only 10 achieved increases of at least that much. Moreover, from 1310 up into the 1360s there is a plethora of congestion and peaks such that ascent attempts across the past two years have not found price able push up through the 1360s, let alone reach just the 1350s on a run earlier this year.

All that technical mumbo-jumbo aside, we did point out time and again throughout the most recent Short trend that price's descent was shallow at best, the decline therein at its worst being just -5.1%, prior to which the previous Long trend's ascent was as much as +12.3%. Add in that price's year-over-year trend is up, and again the Gold Bulls have a chance to stampede toward Base Camp 1377, (the intermittent congestion notwithstanding). But if they were to take out the 1360s on this run, then watch for the mo-mo crowd to start gettin' excited.

'Course, Gold's having marched up +2.0% this past week is net-net all that 'tis actually gained year-to-date as we next display our BEGOS Market Standings. And the real story therein is Oil: four weeks ago 'twas +35.0% for 2019, since which half of such run has been hoovered away. In fact for you website watchers out there, if back on 26 April when you saw on the Markets Trends page Oil's "Baby Blues" (our measure of trend consistency) drop below the safety of their +80% level such that you went Short just one li'l old contract, your gain to this point is (62.80 - 53.36) x $1,000/cac = $9,440 ... lunch therefore being on you:

As well four weeks ago, the S&P 500 was up an unsustainable +17.5% year-to-date. Essentially half that gain too is gone. By the media, blame it solely on the Prez 'n Tariffs; (not on the exasperatingly high "live" price/earnings ratio of 29.8x). History has proven time and again that the stock market can remain unbearably overvalued for only so long, even in the face of the Economic Barometer having found some stability. For example, the Conference Board's May reading on Consumer Confidence hit a year-to-date high as did April's Personal Income. And the first revision to Q1 Gross Domestic Product was but a wee cut from an annual pace of +3.2% to +3.1%, for which we were instead expecting something in the 2s, (although we've still the final revision near June's end). Indeed, JPMorgan Chase sees the Q2 pace being down in the 1s. And as we see in the Econ Baro, the red line (S&P) is finally caving in as it ought toward the blue line (Baro). Further, is this finally the full run to our S&P target of 2154? On verra:

points = 38 points in the lower left panel of the daily bars from three months ago-to-date; note thereto the prior peaks at 1315 and 1325 which ought find Gold's "range-bounders" selling into this most recent spate of strength. As for the 10-day Market Profile in the lower right panel, the two dominant supporters at 1288 and 1281 underscore Gold's persistently having being sitting atop The Box (1280-1240) prior to this most recent gelandesprung: 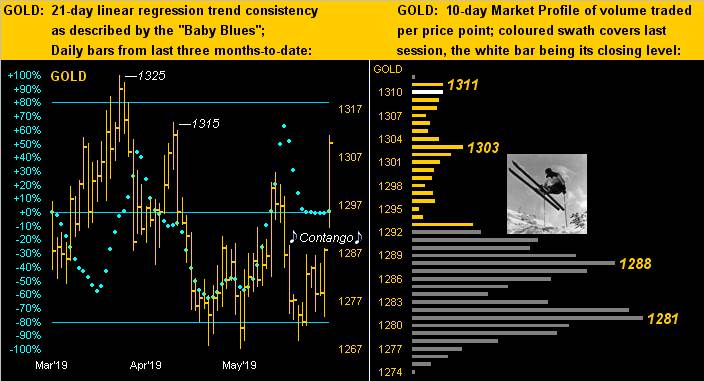 Sadly for Sister Silver, her practically zero contango which took effect a month ago was obviously a no-show as we turn to her like panels. Sis' gain for the week? +0.1% vs. Gold's +2.0%. Nada. She takes the Snoozer Award: 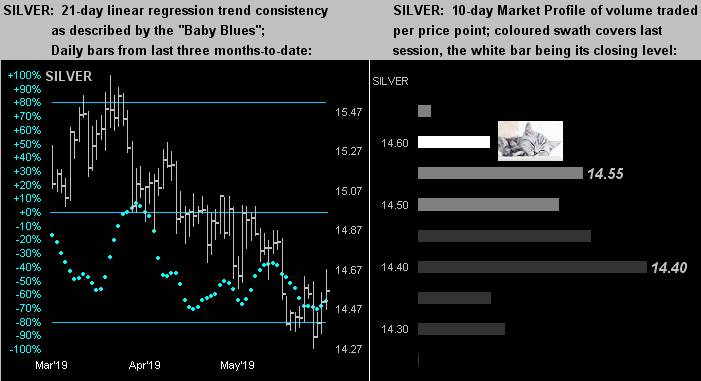 Awarded as well is Gold's overall performance for the month of May: albeit just +1.9%, 'twas Gold's first up month following three successive downers. One takes what one can get. And as one looks eastward from Base Camp 1377 across the alp-like peaks, 'tis clear they are the upside challenge above which Gold must make its ascent, else right back down again shall price be sent: 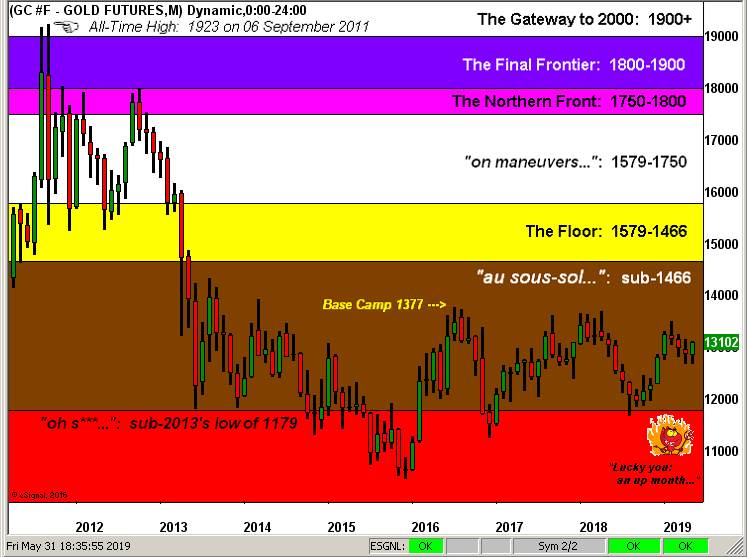 So there 'tis, our key price trend for Gold having flipped from Short to Long. But for how "long"? Given the aforeshown alpine congestion, the technical upside trek shan't be easy ... unless of course "This Is It!" And in the midst of it all comes one of the busiest weeks of the year per incoming data for the Econ Baro: 17 reports are due next week, including May's payrolls, not to mention the Fed's Tan Tome appearing mid-week. Be you minding your Gold or mining for more, c'est superbe d'avoir beaucoup d'or! 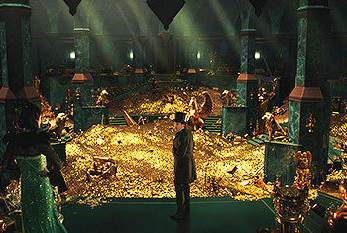