In recent days the market has moved from expecting a rate cut by January 2020 to now expecting as much as three rate cuts by then. As a result both Gold and gold stocks launched higher, forming a “three white soldiers” bullish reversal pattern.

Last week and in previous writings, we noted the importance of the actual rate cut for Gold and gold stocks. Their performance in both nominal and relative terms usually takes hold after the actual cut.

Now, the question is, is this a rally or a bull market? (There is a difference even though financial media talks about multi-year bull moves as “rallies.”)

The start of a new rate cut cycle hasn’t always produced a bull market in precious metals. For example, after the rate cuts in 1989 and 1995 Gold rallied by only 12% and 18%. Fortunately for us bulls, the current context is totally different but I digress.

The stock market will answer the question.

There has never been a real bull market in precious metals without Gold outperforming the stock market (excluding the 1985-1987 period during a 50% decline in the US Dollar).

The chart below plots Gold (red) and Gold against the stock market (blue). 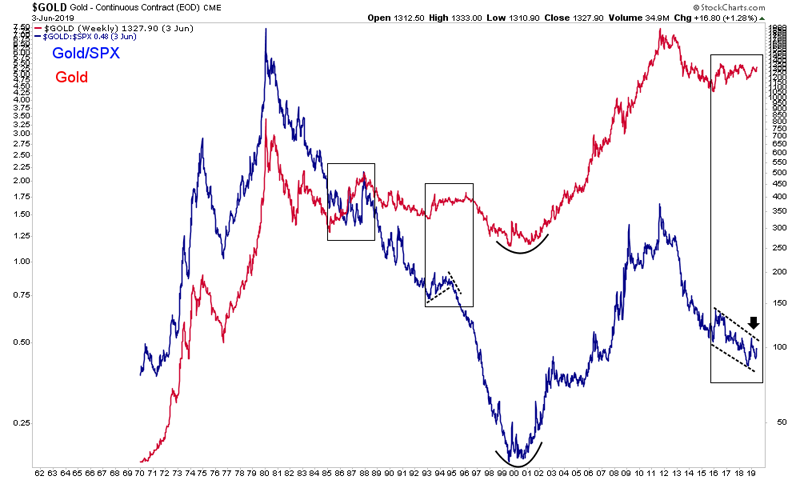 In the scenario in which the stock market and economy stabilize and recover, Gold can still perform well. Fed rate cuts and the like could push it past $1400/oz and potentially to $1500/oz.

How the Gold/S&P 500 ratio performs will inform us on the sustainability of that move. It will tell us if it's just a rally or the start of a real bull market.

The gold stocks are nearly as historically cheap and hated as they’ve ever been. They could make quite a run on a clean breakout in Gold through the wall of resistance at $1375/oz, which we think is more likely than not. To learn what stocks we own and intend to buy that have 3x to 5x potential, consider learning more about our premium service.