One surprising news was followed by another surprising news. First, Trump told the world about his plan to keep increasing tariffs on Mexico, defying his own party. Then, no hint of relief had come regarding the China trade dispute. Finally, we have got the Fed discussing potential interest rate cuts. Investors have aggressively increased their bets on such monetary policy easing. Gold definitely welcomed that idea. Is its breakout to new 2019 highs inevitable?

It's not a sure bet, but a move to these highs just became more likely. Are the above-mentioned changes in investors’ expectations well founded? Not necessarily.

Typically, gold prices are believed to be inversely related to the interest rates. As a result, the interest rate cut should be positive for the gold prices. However, the cut in the federal funds rate by September is widely expected by the markets, so it should be already priced in. Hence, a lot of will depend on the signal sent by the Fed about the future stance of the monetary policy accompanying that move. But, frankly speaking, we do not see why the Fed should cut the interest rates by September. Unless we see a recession, the cut remains unlikely. The Fed should telegraph it earlier, but so far it only announced a pause in the tightening cycle, not its end. The wait-and-see mode does not necessarily imply a cut later in the future. In 2016, the Fed also paused for a year its tightening (from December 2015 to December 2016), but it did not cut the federal funds rate, it did not reverse the tightening move from the end of 2015.

Since the market was once again surprised yesterday, it may take a few extra days before the situation stabilizes and before the market can decline once again. If the Powers That Be keep on bombarding the markets with more news, it may take a few extra weeks. We don’t like the additional delay in the decline, and we’re more than certain that neither you do. But, some things don’t depend on us, for instance President’s Twitter account. Instead of focusing on what is beyond our control, let’s focus on what we can do within our circle of control. That’s one of the basic Stoic rules that is very useful in life in general, but particularly so in case of the markets.

Finally, and perhaps – most importantly – we need to check if what we’re seeing right now is or isn’t a repeat of what we saw in the first half of 2016. Gold and gold stocks are moving higher which makes both situations similar. That’s not enough, though, because there were also other cases when gold and gold stocks moved higher and it turned out to be just a corrective upswing that was followed by more declines.

The markets didn’t move much yesterday, but their relative performance was quite important. 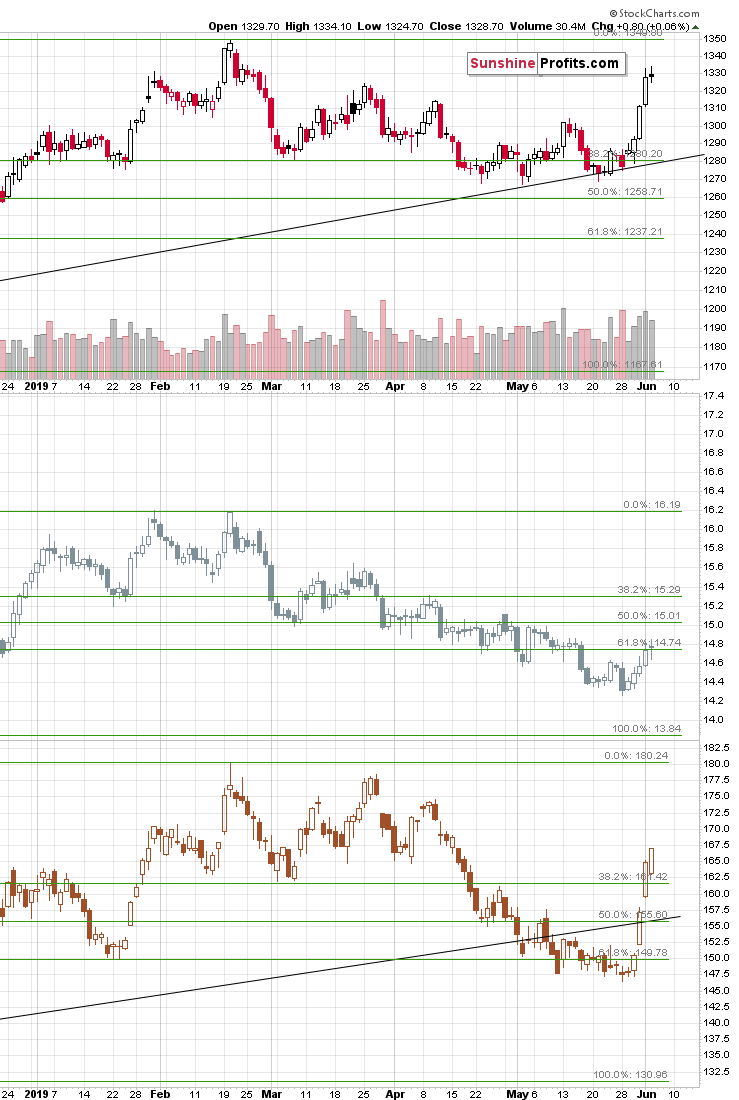 Gold miners closed the session higher once again, while silver didn’t outperform gold, even on a very short-term basis.

The gold to silver ratio is after a major breakout – actually two breakouts. But, does it mean that the ratio can move only up in the short term? No. 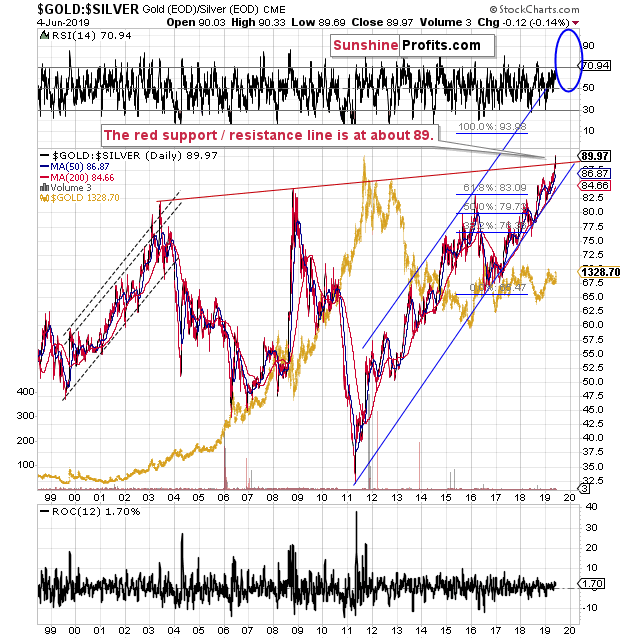 The performance of the gold to silver ratio – it’s relentless rally – suggests that the medium-term remains intact. The metals are moving lower in the next several months. But, since we saw two breakouts – above the previous long-term highs, and above the rising red resistance line – we could see some kind of corrective action in the short term.

This action could easily translate into temporary silver outperformance that would confirm the end of the rally.

It’s not something that’s likely to change the medium-term outlook, though.

How Far Can This Gold Rally Run? 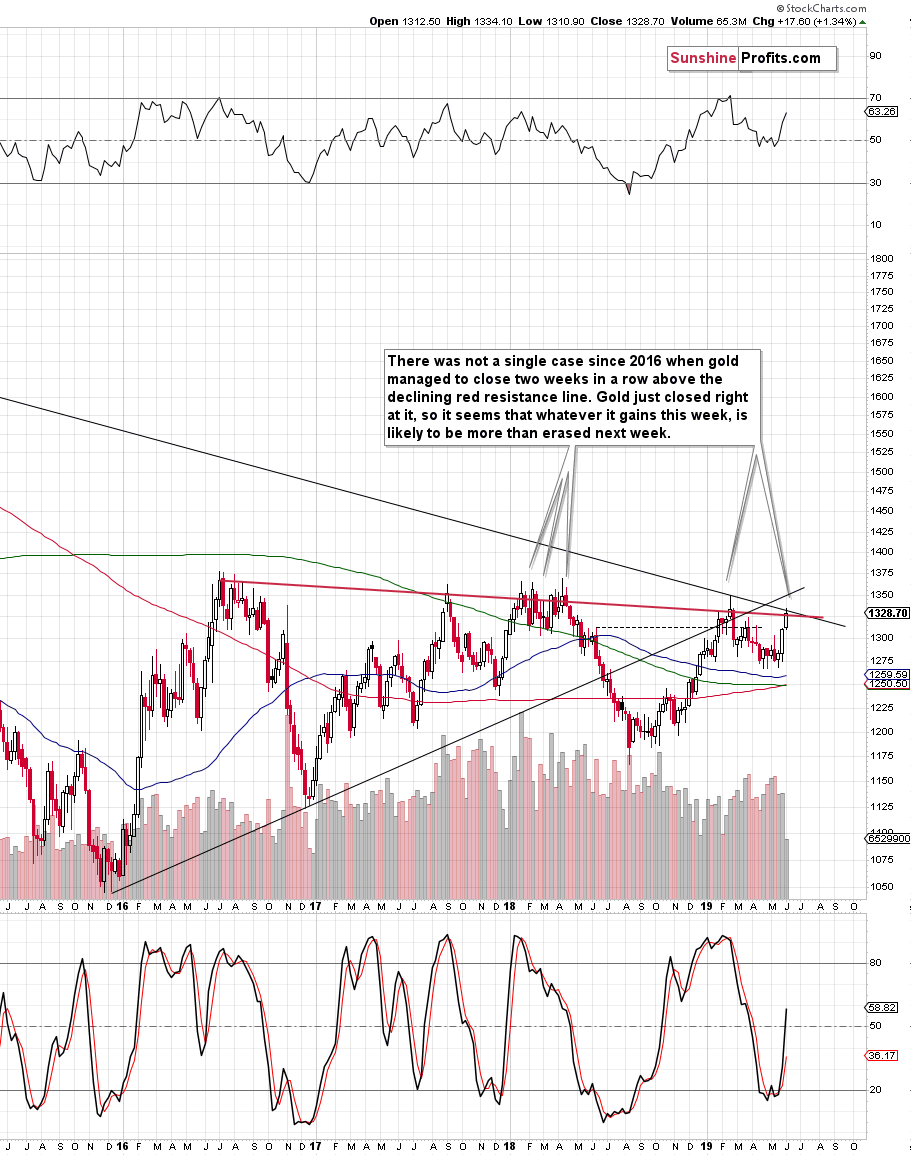 Gold is approaching its long-term resistance created by the previous highs. There is one very interesting rule regarding this resistance. No matter how volatile or promising the rally above the red resistance line was, it was always (in the last couple of years) invalidated in the following week. Given today’s pre-market rally in gold, it seems that we might see a weekly close above it. This means that the next week would quite likely include the invalidation of the current breakout and the beginning of another slide lower.

However, let’s keep in mind that gold has been very volatile and that there are still 3 sessions to go until the end of the week, so it might rally in a more visible manner. 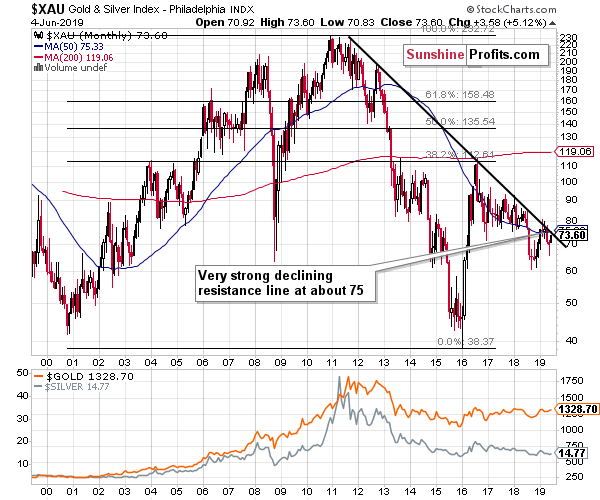 The powerful long-term resistance is just above the current levels – at about 75. However, earlier this year, we saw brief attempts to move above it before the decline continued. So, it could be the case that the precious metals mining stocks still move higher before turning south again. 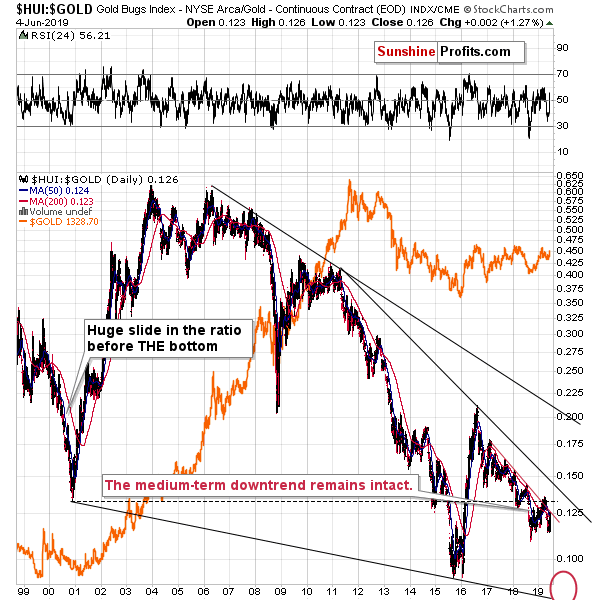 Gold stocks to gold ratio moved substantially lower in the previous years, but let’s keep in mind that its downtrend was temporarily breached earlier this year. Since it happened once, it might happen again. Of course, that would likely take place only on a temporary basis, but this could easily mean a week or two of additional rallies.

On a medium-term basis, we see that the breakdown below the rising support lines was invalidated and the implications for the short-term are bullish.

The above chart shows that the HUI Index reversed right at its triangle-vertex-based reversal. The rally would have likely been much smaller if it wasn’t for the surprising news. Since the markets have to digest quite a few surprising developments, it may take additional several days before the situation calms down and the prices resume their downtrend. The 120 level still appears to be the quite likely downside target for the following months (the initial downside target that is), but it’s quite possible that miners will move even higher before reversing their course.

One of the most important short-term signs for gold is its relationship with the US dollar. And it currently has bullish implications.

The last couple of days were relatively normal in terms of the reaction, but it was already visible that gold is showing more strength than it used to do in early May. The USD Index is barely below its May lows, while gold is well above its May highs. This might have been accidental, but we are seeing a major confirmation of gold’s strength in today’s pre-market trading.

The USD Index is down by just 0.12 and gold futures contract is already up by about $14. This is a confirmation of gold’s short-term strength. We dive deep into the gold-USD charts, targets of their upcoming short-term moves and our sharpened game plan in the free articles section on our website. Drop by and have a look.

Before summarizing, we would like to quote yesterday’s section on dealing with market’s volatility that can be unpredictable at times. It definitely remains up-to-date.

Something in Addition to (Instead of?) Patience

(…) Patience is extremely rewarding while investing, but there is another way to deal with markets’ unpredictability.

For instance, those who diversified into silver are likely much calmer now than those who are trading only mining stocks (by the way, we give silver priority over gold in our managed futures service). But the diversification potential doesn’t end there. While the precious metals sector was impacted by the Trump’s trade comments in a bullish way, the impact on the crude oil market was very bearish. It was very positive for our short position in crude oil, which we had opened on April 23rd, right after crude oil closed at $65.55. Monday’s closing price is exactly $53.25. That’s over $10 in crude oil (about 15%) in less than 1.5 months. That’s way over 100% annualized. There were also multiple profitable trades in our forex trades. There are no trades open at the moment, but we are making this year’s currency analyses available for you to review. While an individual surprising news may be negative for one market, it can be positive for a different market. In other words, diversification allows to get profitable in a smoother, more predictable manner. It’s not as comfortable as investing in a fully managed fund, or a trading program, but it’s something that greatly helps along the path to profits on an individual basis.

Then, there are also time perspectives. The recent moves may be significant on a day-to-day basis, but either by zooming in or zooming out, this can be mitigated.

The long-term approach – naturally connected with patience – means focusing on the big price moves instead of the brief ones that take just a few days and viewing the latter as price noise. It’s not stressful, if one chooses to focus on different kind of moves. The downside here is that for longer periods, one may not have any positions at all, missing some good opportunities along the way.

Alternatively (or additionally), one could be zooming in – into day trading. It’s not everyone’s cup of tea as it requires more time and attention on a daily basis. But by making multiple tiny trades, no single big move is likely to have a particularly adverse effect. Surely, a single position could be closed unfavorably, but the stop-loss orders in such cases are very close and the single transaction barely changes anything. For instance, during the testing period of our Day Trading Signals, we had 42 trades and quite a few of them were not profitable, but despite these cases, overall (!) we managed to achieve the performance of 0.68% profit per trade (given no leverage for cryptocurrencies and 10x leverage for other assets).

Summing up, the current upswing in gold, silver, and mining stocks continues to appear temporary, but – based i.a. on how strong gold is relative to the USD movement, and silver’s lack of strength – it seems that the precious metals market might move quite visibly higher before reversing (likely next week). Despite the change in short-term outlook, the medium- and long-term downside targets remain intact.

It's unclear how high gold will go, given the current strength relative to the USDX, but the previous highs of about $1,350 or even $1,370 are not out of the question. Neither price level would invalidate the bearish outlook for the medium term. With gold at about $1,370 and gold to silver ratio verifying its breakout at 89, silver could be at about $15.40 or so. The relative performance of gold, silver, mining stocks and the USD Index should give us key confirmations of that longer-timeframe outlook.