Sirens Going-Off: We're Out Of Time!

We've got a number of critical subjects on the plate in front of us, the first one being that a recession is nearing. It's closer than it has ever been in the past 10 years and Trump is under extreme pressure to get the FED to lower rates and close a deal with the Chinese, before his approval ratings dwindle and his re-election hopes look slim.

Recessions are part of economic cycles; they are literally IMPOSSIBLE to avoid. All a government, a central bank, an investment institution, a corporation, or an individual can ever do is to prepare, manage, and operate within that context in the right manner, but no one has ever invented or will ever come up with a way to end recessions or slowdowns. Nature is cyclical, seasonal really, and so are economies.

The problem is that, as I just said, preparation is the first step towards circumnavigating recessions successfully, and the fact of the matter is that 80% of Americans live paycheck-to-paycheck, 50% are dead broke or one salary away from it, and very few own assets or have savings to fall back on.

No, America is only thinking about the good times when it operates. The government has put zero thought into how much expenditures (Medicare, Medicaid and Social Security) will remain mandatory during the next slowdown and they've just had a RECORD spending month. Not since the republic was founded did any government spend as much as in May 2019; all while the president keeps saying that it's the hottest economy on the planet, implying that he understands that this is as good as it gets. 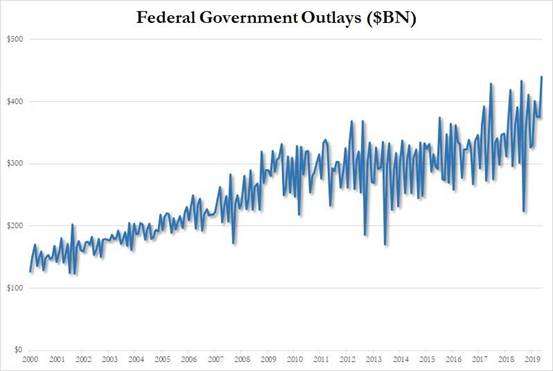 When we came out of the Great Recession in 2010, government debt was 65% of GDP and it is now 105% of GDP. This stat is so alarming, since it proves that the U.S. can NEVER, not in a million years, tax its way back to a balanced budget; it's not strong or vibrant enough.

Two options are left on the table, which are to (1) drastically cut spending, or (2) inflate the debt away. The 3rd option is to not lower the debt levels and remain indebted for good, which will effectively turn this country into a nation of slaves.

What's certain is that the wealthy, who have a record amount of cash on hand, will again benefit tremendously from the coming recession, as they consolidate more assets, more businesses, and more power, while prices decline and the general population gets distressed once more.

In boom times, Washington is projected for a $1T annual deficit, but you can't shut off the entitlements hose in the next recession, so I calculated tax receipts would drop, making the deficit an insane $1.8T, on an annual basis.

Zero rates have made it so that the hurdle to borrow money for corporations and for zombie enterprises, which should have gone bust many years ago, is zilch.

Just think of it this way: in 2010, U.S. corporations owed $6T and now they owe $10T, while total profits have risen from $1.7T to $2.2T. Thus, in 9 years, businesses borrowed $4T and generated $0.5T. That's horrible. The reason the markets are up this much, despite this crazy statistic, is because (1) there is no viable alternative for your cash when interest rates are so meaningless, and (2) because CEOs spent (get ready for it) $5.7T on share buybacks and only $2.2T on capital expenditures since 2010.

Billionaires, smart as hell, people like Stanley Druckenmiller, Ray Dalio, Jeff Gundlach, and Paul Tudor Jones, who have all STARTED their careers in commodities, are voting with their money on gold right now.

And so, with rates extremely likely to be cut in July, they're buying Treasuries, which go up in price as yields come down, and gold, which soars on low yields, coupled with slowing economic conditions (2009-2011). Rates are NOT going up, which is the reason this is such a high probability bet - the likelihood that the FED goes the wrong way is next to non-existent.

In the chart above, you can see that this is the 3rd time the mining stocks are attempting a breakout. You can already sense the demand for them is beginning to resume.