Gold Closes At A New Record High for 2019

As we look at this year, besides from the rally which began in mid-August 2018 up to the former record high of this year, it is clear to see that that was possibly the only noteworthy and extended rally we have seen since 2017. 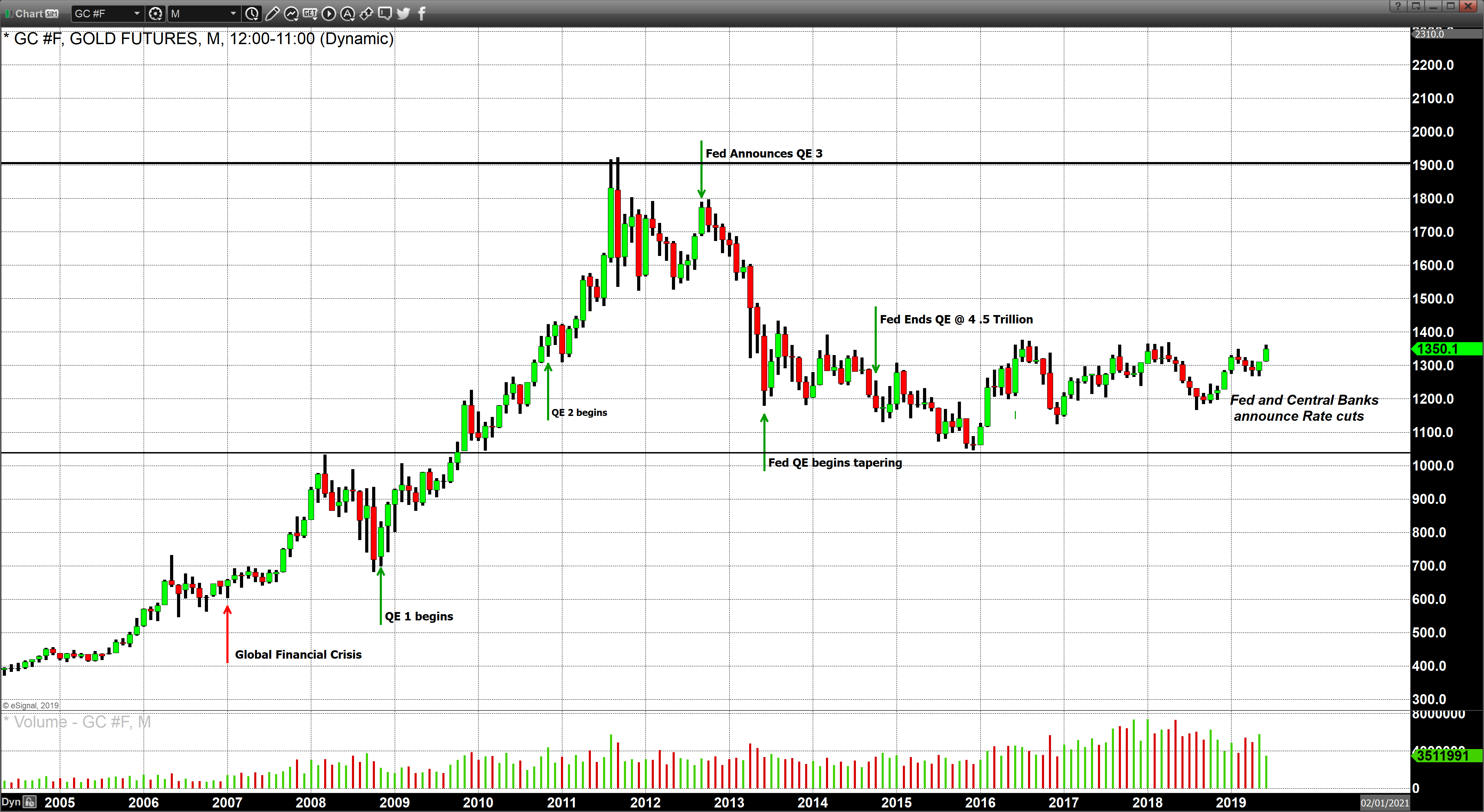 Last year had an unusual characteristic at the beginning of the year in that it was fighting tooth and claw to track above $1350 to $1370, to match or exceed the previous highs that had been made in prior years. Multiple attempts to exceed this price point were all met with failure.

Historically speaking gold prices have had insurmountable resistance at roughly $1350 to $ 1370 since 2014. In October 2012 gold prices hit its final peak at 1800 and never looked back, or more appropriately put never looked up.

From that moment forward gold prices had a slow and methodical decline with consistent lower lows and consistent lower highs. This marked one of the longest corrective periods of this decade.

Just as they say it is darkest before the end of the tunnel, at the conclusion of 2015 (August through December) gold prices hit the lowest trading point of the correction since reaching the all-time record high above $1900. From there gold prices lost roughly half of its value as traded to roughly $1040 per ounce.

Many analysts and investors became extremely bearish and at that point and given that we had an extremely oversold market the majority of calls from analysts were forecasting that gold could easily trade below thousand and go to $800 per ounce. That extreme pessimism was absolutely a signal that a bottom was in place.

Beginning in November 2015 market technicians identified a rounded bottom just prior to a dynamic and exceedingly strong rally which took pricing off of the lows at $1040 and traded as high as $1375 before backing off.

That price point ($1375) became the brass ring that traders on the carousel consistently and unsuccessfully reached for on multiple occasions. While gold prices were able to come close to that price point, it still remains the highest value since the major multiyear correction.

Now once again the brass ring is insight and feels as though there is a real probability that that price point will be surpassed and we will finally break above the major resistance that exists just below $1400.

There is a perfect storm brewing which could definitely take us to that price point. Even though the fundamental factors are absolutely different than 2008, there are distinct similarities in terms of the willingness of the central banks to be extremely dovish and accommodative. The fact of the matter is, whatever you want to call it, the central banks, as well as the Federal Reserve, are moving back towards quantitative easing. It seems the days of quantitative tightening have concluded and fears of a slowing global economy have prompted the central banks to pivot by providing liquidity and low interest rates.