After years of failed attempts to break out of its trading rut, gold finally did, shattering resistance that has held since 2013. Not only that, it breached the “psychologically important” $1,400 level. It looks to be consolidating before heading higher—possibly much, much higher.

But all of this is in US dollar terms. The US has plenty of hard-money advocates, but it’s the Chinese who buy more gold than anyone else.

It’s important to look at gold from an international perspective. Here’s a chart showing the percent change in gold prices in seven major currencies. 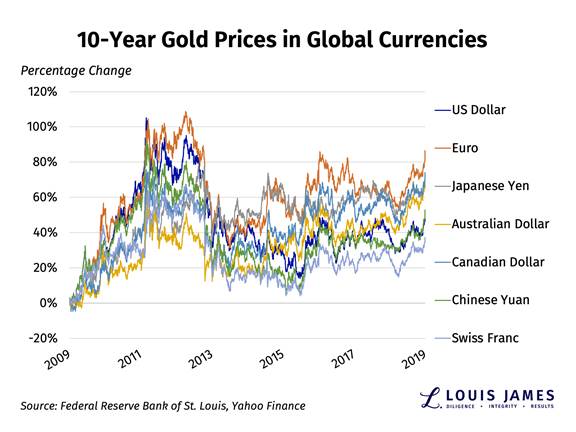 The first thing that strikes me about this chart is that while gold may have just broken out in USD terms, the overall trend since 2013 is upward. In some currencies—such as the Australian and Canadian dollars and the euro—gold has been rising strongly for years.

It’s worth pausing to appreciate that gold didn’t just break out in Aussie terms—it just hit a new record high. This has important implications for gold miners Down Under, whose costs are in Australian dollars. As a speculator, searching for great Aussie gold plays just notched up on my priority list.

It’s also worth pulling back to have a look at this in a longer time frame. Here’s the same chart since 2000, just before the beginning of what I think future investors will see as the gold rally of the century (and possibly the beginning of the end for fiat currencies). 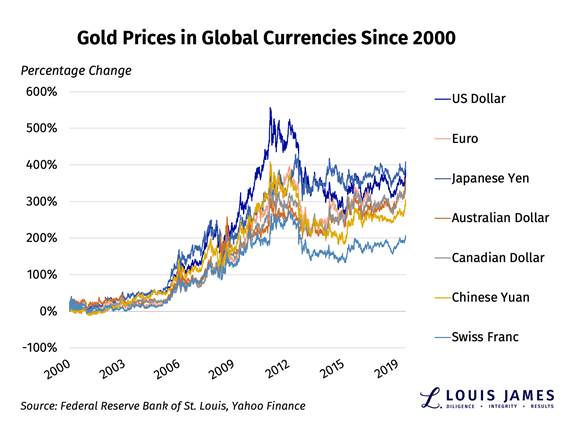 Note the way the percent change from a lower starting point makes the USD surge much higher than any of the others. This both shows and empowers the disproportionate influence of the paper-gold traders in New York on gold prices. Gold is still primarily priced in USD, after all.

But this is changing. The Shanghai Gold Exchange, for example, publishes its own spot gold prices—and they’re based on physical bullion changing hands. In my view, this is a more real and meaningful price. It’s still driven largely by the paper-gold trades in the West for now, but it’s just the first of what I fully expect to be many new sources of gold price discovery going forward. And it will be particularly interesting to see how gold prices in Chinese yuan do, if China ever lets its currency trade completely freely.

At any rate, the main point of this chart for me is that what looks like a disaster for gold since 2011 is a result of seeing it only in USD terms. Globally, it looks like more like a period of consolidation before heading higher.

But there’s something else…

Gold trading “sideways” in recent years is during a period of low inflation, especially in the US and EU.

I’m not predicting hyperinflation in USD and EUR terms. Nor am I calling for the collapse of Western civilization. Both are possible, but that’s a subject for another day.

I am saying that when central banks finally get their wish for higher inflation, I think they’ll get it good and hard. That will change everything for the paper traders who’ve kept gold in a USD rut since 2013.

So as a thought experiment, let’s look at what happens when we add a currency that has seen a much higher inflation rate in recent years, like the Russian ruble. 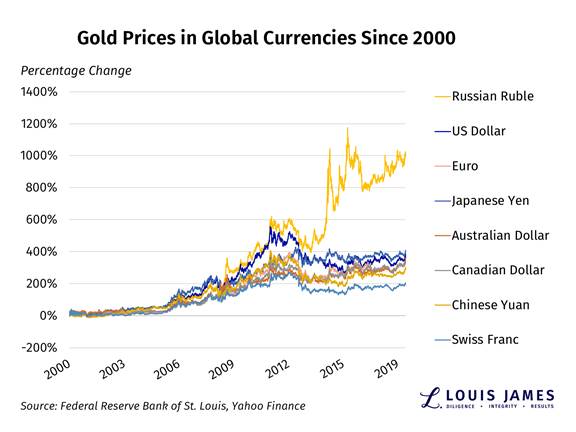 To have a look at what gold can do for us in the case of a full-blown economic crisis, I wanted to show you a version of this chart with gold in Venezuelan bolívars, but I couldn’t get the data. Argentina is in crisis as well, however, if not quite so acute. Have a look. 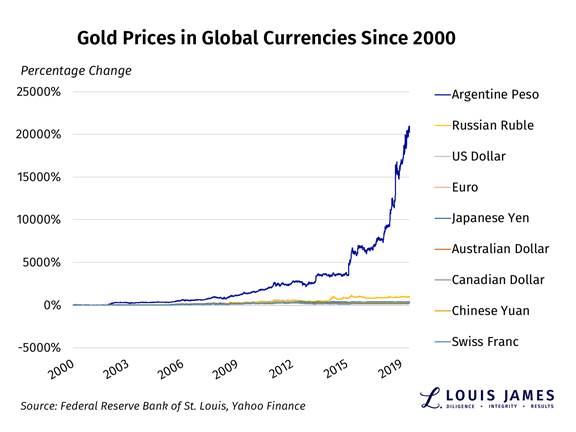 Even gold’s huge rise in Russian rubles is dwarfed by gold going to the moon in Argentine pesos. As for Venezuelans, many of those who stashed some savings in gold likely made a life-saving choice.

Again, I’m not saying that this is the fate of the USD, at least not any time soon (though it could be).

But consider what happens when the Fed and the ECB finally get their wish and create significantly higher inflation.

Consider that the US inflation target is now a “symmetrical” 2%. This means they now want higher than 2% to make up for all the time spent below 2%. It means 3% or even 4% would be fine by them for a time. Think about what that does to all the massive amounts of personal, corporate, and government debt in the US—while gold is still priced mostly in USD.

I don’t think it’s doom-and-gloom gold-bug talk to say that gold should do even better when inflation does ramp up. And the implications of this modest projection for gold and silver stocks are… dramatic.

In short, this is a case of asymmetrical risk and reward—skewed to the upside.

I could lose some money betting on this precious metals rally—but I literally risk losing a shot at a life-changing fortune if I don’t take the chance.

And I do think the odds favor the upside.

If you have questions about this, I encourage you to join me in my next live Q&A chat, scheduled for 12 noon EDT, Saturday June 29. If you can’t make it while we’re live, please check out the recording afterwards.

If you’d like to keep up with my take on this and other investable market trends, please sign up for my free, no-spam weekly letter, the Speculator’s Digest.

And if you want to see how I’m deploying my own money and speculate alongside me, please subscribe to my flagship publication, The Independent Speculator.

Either way, I’ll do my best to help you out.