Gold Gets a Boost of Rocket Fuel From Negative Bond Yields 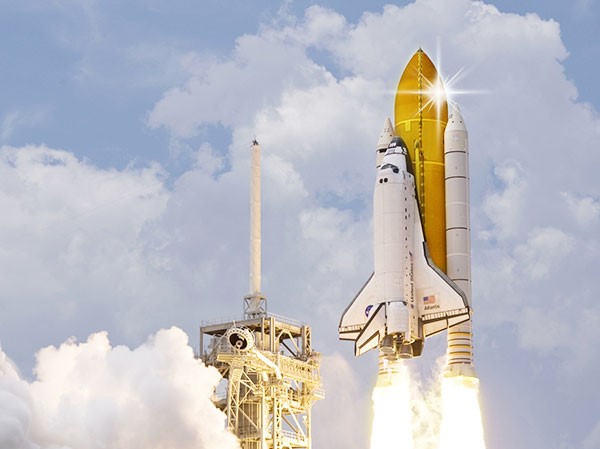 Ladies and gentlemen, we have liftoff!

After breaking out of a five-year trading range, the price of gold surged above $1,400 an ounce last week for the first time since 2013 on expectations of a U.S. rate cut. The 10-year Treasury yield fell to around 2 percent, its lowest level since November 2016. Meanwhile, the pool of negative-yielding government bonds around the world hit a fresh record high of $13 trillion.

Gold “may finally be off the leash,” Bloomberg’s commodities columnist David Fickling wrote last Thursday after the yellow metal rallied above $1,350, a number that for the past six years has filled gold bulls with “dread.” Last week I shared my belief that gold would continue to rally if it broke above that key resistance level. Like billionaire hedge fund manager Paul Tudor Jones, I believe gold can now make it as high as $1,700 an ounce “rather quickly” as more generalist investors decide to participate.

And even if gold’s price did hit $1,700, it would still be well within its DNA of volatility. The truth is that it’s a non-event for gold to go plus or minus 20 percent over any rolling 12-month period.

Lower yields have reportedly caught many analysts by surprise. In January of this year, not a single economist among the 69 surveyed by the Wall Street Journal predicted that yields would drop below 2.5 percent by June. The average forecast had been closer to 3 percent.

Some market-watchers are now looking to 1 percent yields. Writing for Bloomberg, longtime financial analyst Gary Shilling says he’s “more confident than ever in that [1 percent] forecast,” due to “chronic low inflation” and the likelihood that the next recession is “already underway.”

Falling bond yields, as I’ve explained many times before, have historically supported the price of gold.

A Record $13 Trillion in Negative-Yielding Debt

That’s especially the case when yields turn negative, as they did all across Western Europe last week following hints that the European Central Bank (ECB) could initiate a new round of quantitative easing (QE). At the annual ECB conference in Sintra, Portugal, on Tuesday, chief banker Mario Draghi stated that in the absence of economic improvement or a lift in inflation, “additional stimulus will be required.”

A number of European countries’ intermediate government bond yields sagged to record lows. French and Swedish 10-year yields fell below 0 percent for the first time ever. Close to 100 percent of all debt issued by the Swiss government, from one-month to 20-year maturities, now carries a negative yield. That’s closely followed by Sweden (91 percent of all debt), Germany (88 percent), Finland (84 percent) and the Netherlands (84). 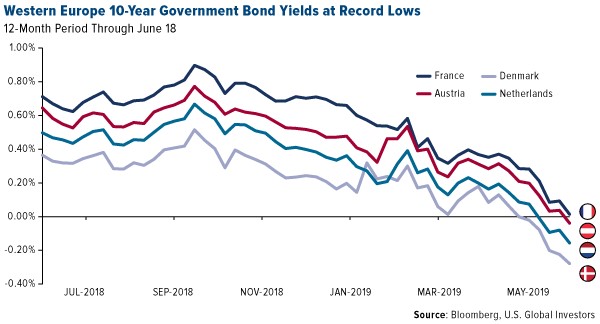 Altogether, a jaw-dropping $13 trillion in global government debt—a new record—is now offering sub-zero yields. This means that investors are guaranteed to end up with less than the bond’s principal amount if held until maturity.

We could see increased foreign demand for U.S. Treasuries because of this, which would push bond yields even lower.

Gold stocks also rallied last week, with the FTSE Gold Mines Index advancing more than 5.3 percent on Thursday, its best one-day gain since January 2017. The group is now beating the market for 2019, as of June 21. 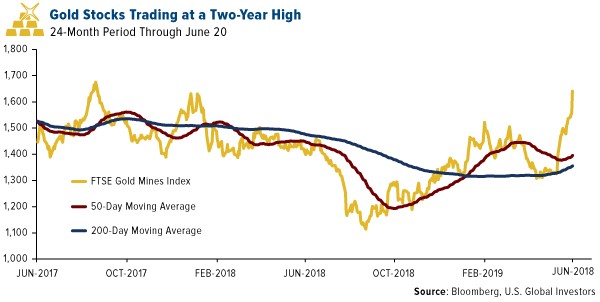 Among the companies with the biggest moves last week were Eldorado Gold, closing up 12 percent on Thursday in Toronto trading; Coeur Mining (up 11.1 percent); Yamana Gold (9.5 percent); Hecla Mining (7.6 percent); and IAMGOLD (up 6.7 percent).

As rates look ready to decline, I believe it could be prudent right now to make sure you have adequate exposure to gold. I always recommend a 10 percent weighting, with 5 percent in bullion and gold 24-karat jewelry, the other 5 percent in well-managed gold stocks, mutual funds and ETFs.