Oreninc Index As The Number Of Financings And Dollars Increased 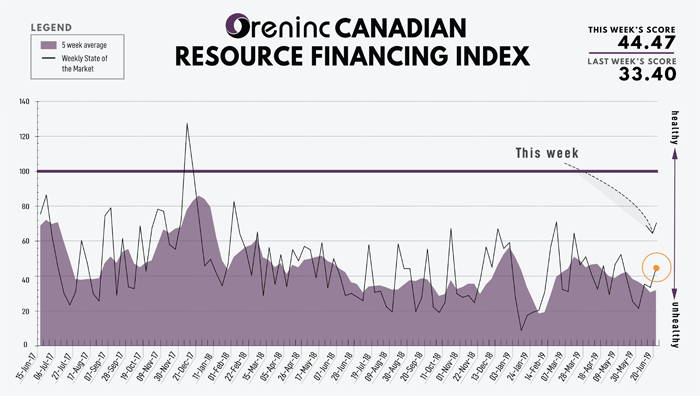 The Oreninc Index increased in the week ending June 21st, 2019 to 44.47 from an updated 33.40 a week ago as the number of financings and dollars increased.

Gold pushed up to a six-year high as it blasted through the US$1,400/oz level mid-week on a $70/oz rise to hit a high of $1,415/oz as the US Federal Reserve indicating an easing of interest rates is coming while European Central Bank head Mario Draghi indicated that monetary stimulus could return in Europe. As a result, everything was up this week with the exception of the US dollar. Gold priced in Australian dollars hit its highest level ever at over A$2,000/oz and even copper caught a break, spurred higher by a week-long strike at Codelco’s massive Chuquicamata copper mine in Chile.

In geopolitical news, the USA was within minutes of launching a retaliatory attack on Iran after the Middle-Eastern nation shot down an unmanned US drone. The attack was called off by US president Donald Trump who said the retaliation would have resulted in a disproportionate loss of life.

Boris Johnson, who favors a hard UK exit from the European Union, has emerged as the front runner to lead the UK’s Conservative Party and therefore become the next prime minister, although a final vote will need be held for another few weeks.

Jaguar Mining (TSX:JAG) announced a non-brokered private placement to raise up to US$25 million @ C$0.085.

A modest raise which will provide initial drill testing of some key targets at Pino de Plata.