You Will Be Surprised At The Real Reason Gold Has Rallied

Back on May 24, I authored my first article on gold in quite some time. As I noted in that article, there was not much for me to say until that time, as gold was clearly within the consolidation/pullback phase I had expected months before that.

Within the May 24 article, I highlighted that gold was at a potential bottoming phase, but that it was at an inflection point. If it were able to break back out over the $121.50 region within the following week, then we would have our initial indication that the bull market is back. That is exactly what it did, and it has not slowed down much since.

Moreover, I think gold made quite a statement this past week as well. As I noted in my last gold article, written almost two weeks ago, gold was set up to “take off like a rocketship.” And this past week, it certainly has provided us with a nice move higher.

If you've read all the reports and articles about gold this week, you know there has been no shortage of reasons offered as to why gold has rallied. The first headline I saw was “Gold strikes levels not seen since 2013 on dollar weakness.” In 2013, the DXY was between 79-85, and right now the DXY has not even dropped below 96. Is that really “weakness” in the dollar when it is still stronger now than it was the last time gold was here? Do you see something off with this correlation? In fact, the DXY is closer to its 2017 highs than it is to the 2013 levels. (And it has a lot of room to drop based upon our analysis.)

But it is not like these pundits are burdened by the facts. Why should they be? If there is a superficial reason available, that is always easier than being accurate or factual.

Then we are hearing about how rates (or the Fed) are affecting gold and causing it to rally. Yet this, too, is another specious claim when you look at the facts. As you can see from the attached chart, there really is not much of a correlation there either. 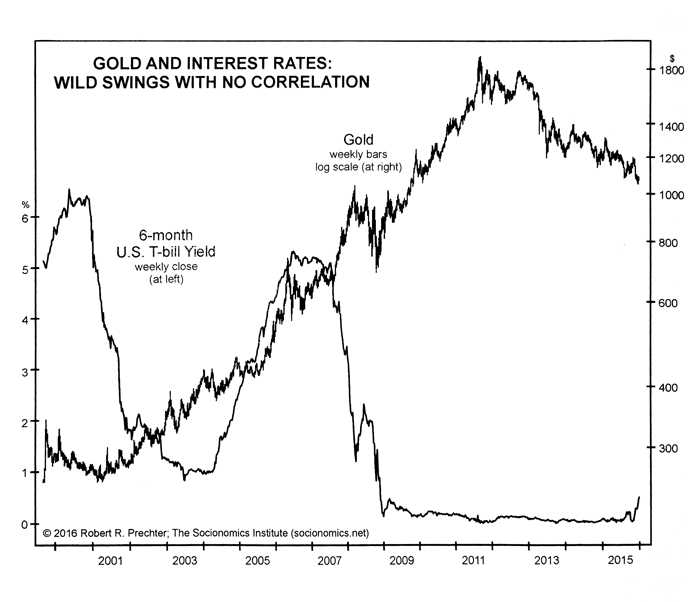 Again, why be burdened by the facts if recent news can offer a superficial reason?

I am now going to let you in on a secret as to why gold really moved to highs we have not seen for years. It may shock you. It may stun you. You likely won’t believe me.

Yet I guarantee you that this is the reason gold finally rallied up to levels not seen since 2013, even though no one seems to be citing it. So you probably should sit down before you read on because it is so shocking.

This past week, I have been reading up on how many official UFO sightings have been reported. As I read in an online report:

Three more U.S. senators received a classified Pentagon briefing Wednesday about a series of reported encounters by the Navy with unidentified aircraft, according to congressional and military officials — part of a growing number of requests from members of key oversight committees.

The interest in “unidentified aerial phenomenon” has grown since revelations in late 2017 that the Pentagon had set up a program to study the issue at the request of then-Sen. Harry Reid (D-Nev.). Officials interviewed multiple current and former sailors and aviators who claim to have encountered highly advanced aircraft that appeared to defy the laws of aerodynamics when they intruded on protected military airspace — some of which were captured on video and made public.

(Hey, if they can use the latest news to come up with a specious and superficial reason about gold, why can’t I?)

As far as how I have been viewing the market in general, despite all the postings of the COT report being bearish and the technical indicators being overbought, this is what I wrote to my members last week to prepare them for the impending rally I was seeing:

As gold approached its highs of the past 3 years during this week, I am now hearing about how the RSI is hitting overbought levels, how the COT is suggestively bearish due to the commercial’s short positions, etc. But, very few understand these points within the appropriate context.

However, when the market turns towards its bullish inclinations, as it has potentially done with a 5-wave rally off the May lows, simply reaching a level in an indicator which has been viewed as an “overbought” reading is not bearish. Rather, these indicators will embed during a strong bullish move (most specifically a 3rd wave). This often fools everyone who is reading the indicator in the same way during a bullish trend as they do within a bearish trend. The same applies to the COT. We have seen many instances where the market has entered very long periods of extreme bullish action against the positioning of the commercial traders. So, again, I would not view this as dispositive of the nature of the market.

Rather, the one focus which is the common denominator of truth in the market is price. And, as I said this past week, once GLD breaks out over 127.25, we have to be on high alert that a 3rd wave parabolic rally can take hold at any time, similar to what was seen in early 2016.

In looking at the SPDR Gold Trust (GLD) chart, this is what I am now seeing. With the breakout we have seen this past week, we now have a clear path directly to the $137/$138 region next. But, as you know, there are always going to be obstacles in the way. That is why, as prudent traders, we are always concerned about risk management.

While many deride my use of “alternative counts,” it is what keeps me on the correct side of the market the great majority of the time. If a primary count should fail, then I will know early enough to be able to adjust. So, I am always considering alternative perspectives as to where I may be wrong in my primary expectation, while continuing to follow my primary count. This is one of the ways in which I practice risk management.

There are quite a few miner charts that suggest this rally will take shape as a diagonal. So, I have to at least be concerned about the potential that GLD can morph into a similar pattern, while still remaining bullish in the bigger perspective. But, as long as it holds over the $129-$130 support region on all pullbacks from this point forth, it can accelerate to the $137/$138 region next.

Please note that a sharp break down below that support is unlikely to change its bullish overall larger degree nature; instead, it simply suggests that the pattern can morph into a diagonal. While I am not going to go into the difference this makes to the smaller degree perspective, I will say this: Should it morph, it will be more choppy over the coming weeks/months, as compared with a straight parabolic move higher followed by high-level and shallow consolidations, which I would normally prefer.

But I want to warn you that this market has surprised many investors and traders with this move up. In fact, many were even caught shorting for many reasons, as they did not see the impending rally as we did early on. And this market does not often allow a gentleman’s entry.

So, while some have stopped out on their short trades and are expecting the market to pull back so they can get an entry on the long side, experience has taught me that this can be a cruel market with regard to letting people on the train once it has left the station. While their analysis failed to recognize the rally setup before it began, they are now relying upon luck to provide them an entry opportunity, as they are now hoping for a pullback. But clearly my money is not betting on it as long as we continue to hold our support pivots, which we will continue to raise should the price continue to rise in the coming week. Good luck to all.

Note: I am not invested in GLD. I do not view GLD as my primary product for being long in the complex.