Bond guru Jeffrey Gundlach of DoubleLine Capital noted in his 2017 forecast that the copper-to-gold ratio was a "fantastic" indicator of interest rates. Several years ago, I tested his thesis by constructing a two-year regression model of the U.S. 10-year Treasury yield given daily Comex copper and gold prices. The results were stunning (Kitco commentary April 18, 2017). 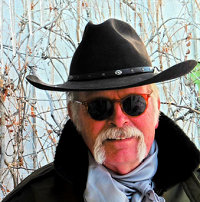 Those results further improved with the best two-year fit occurring over the period of June 18, 2015 to June 9, 2017 (Kitco commentary December 27, 2017). The goodness-of-fit, or “R-squared,” peaked at 0.89 – the closer to 1.0 the better. The correlation of the 10-year yield with the ratio over this period was a very tight -0.94. The error standard deviation between the model and actual yield proved less than 11 basis points (bps).

It is important to note that I chose the gold-to-copper ratio (GCR) for this analysis since we think in terms of "pounds-of-copper-per-troy-ounce-of-gold" in Northern Nevada – accordingly, Gundlach correlations are positive; mine are negative. The modeling outcome for either approach is unchanged.

Since that time, the relation softened at least in terms of two-year regression. For example, a similar model based through last Friday’s close (June 14) shows a correlation of the 10-year yield and GCR of only -0.16 with a corresponding R-squared of 0.03.

DoubleLine Capital’s Jeffrey Mayberry, who has studied this relation in great depth, makes this important observation:

The ratio’s absolute level is irrelevant. What matters is its direction – and whether the yield on the 10-year Treasury moved in the same direction [in my case, opposite direction] or diverged. In past episodes of divergence, the 10-year yield has eventually tended to follow suit of copper-gold (“The Power of Copper-Gold: A Leading Indicator for the 10-year Treasury Yield,” Jeffrey Mayberry, DoubleLine® Funds)

This encouraged me to look at recent correlations between the 10-year yield and the GCR to determine which case applies now.

Correlation Map Indicates Strong Persistence
A correlation map is a valuable technique for detecting changing directional behavior between two market variables. Figure 1 is the 3-month (Y-axis) and 1-month (X-axis) rolling correlations of the U.S. 10-year Treasury Yield and the GCR. 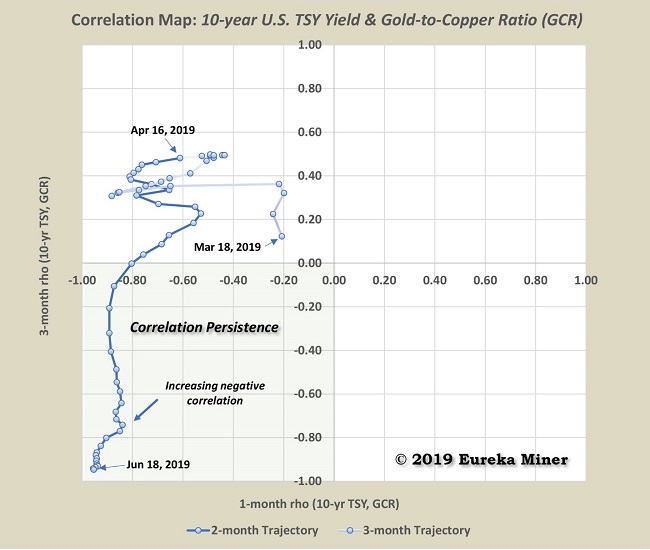 Looking back three months, the correlation between interest rates was mildly negative on a 1-month basis and weakly positive for 3-months. Moving ahead, the 1-month strengthened negatively eventually driving the 3-month negative too. When the signs of short- and mid-term correlations are the same, we say the correlation is “persistent” (i.e. in the third quadrant of Figure 1). The persistence has continued resulting in currently very high negative correlations for both time bases (-0.93, 1-month; -0.95, 3-month). Following Mayberry’s definition, the relation has moved from weak divergence to a strong directional behavior between interest rates and the ratio.

Figure 2 is a 3-month regression model of 10-year U.S. Treasury yields and the ratio of gold and copper prices as of Friday’s close, June 14. 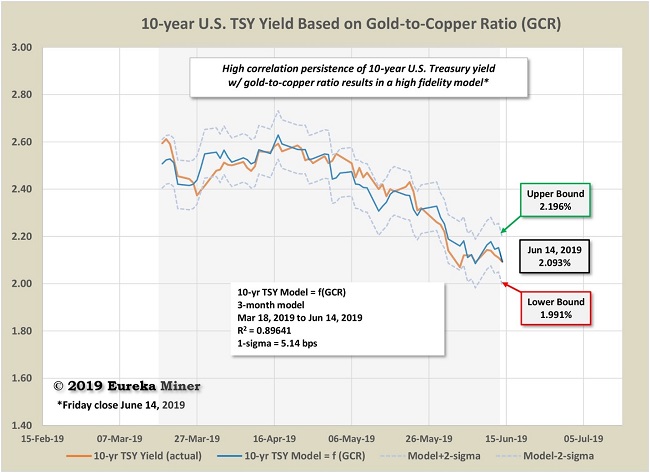 Reassuringly, the high correlation persistence shown in Figure 1 results in the high-fidelity model of Figure 2. The “goodness-of-fit” is a respectable 0.896 with a statistical error of only 5.1 bps. Two-standard deviation (2-sigma) boundaries indicate upper and lower bounds for yields.

Recent geopolitical concerns, slowing global growth and uncertainty about U.S./China trade relations have caused an increase in the GCR and decline in U.S. Treasury yields. As market participants run to safe havens like gold and U.S. Treasurys, they typically retreat from “risk-on” assets like copper. Rising gold and declining copper prices raise the GCR while higher bond prices produce lower yields. At last week’s close, the GCR was at an elevated 511 pounds per ounce and the 10-year Treasury yield scored a lowly 2.093%.

These results indicate the Gundlach relation is indeed alive and well!