The Big Bad Bully on the Black Gold Block

Last week, I commented on America’s dependence on foreign sources for essential minerals and compared our current situation in that venue with our dependence on OPEC for oil supplies from the mid-1970s to the mid-2000s (Mercenary Musing, May 27, 2019). I concluded the segment with this statement: “… comparing energy to minerals is a bit like mixing oil with water”.

In today’s missive, I document the history and development of American shale-hosted petroleum and the new domestic energy paradigm that has come to pass.

The United States of America is now the big bad bully on the black gold block.

The advent of widespread horizontal drilling and fracking began in the mid-2000s and it solved 45 years of declining American petroleum supplies and massive export of our dollars. That said, shale gas is not a new commodity and the two technologies were introduced many decades ago.

In fact, shale gas was first extracted as a resource from the Marcellus Shale in Fredonia, New York in 1821 and used to light village stores. Horizontal drilling began in the 1930s and the first well was hydraulically fractured in 1947.

What evolved into the shale gas revolution got its start in 1981when Mitchell Energy drilled and fracked a gas showing near Ft. Worth, Texas. For the next two decades, entrepreneur George Mitchell experimented with various methods of hydro-fracturing to economically extract natural gas from the Barnett Shale, finally succeeding in the late 1990s. Bigger competition soon moved in and Mitchell was sold to Devon Energy in 2002. By 2005, horizontal completions outnumbered vertical wells and in 2012, the Barnett Shale play had 16,000 wells in 25 counties producing over 30% of Texas’ natural gas.

I first learned about the widely spreading application of horizontal drilling and fracking technologies from an independent, Dallas-based petroleum geologist in April of 2007. This wise old fellow had lots of skin in the shale game and correctly predicted that the United States would be awash in natural gas within a few years.

Natural gas production soared in many shale basins from the Rockies to the Appalachians. The aforementioned Marcellus Shale, which stretches along the Appalachians from West Virginia to New England, is the country’s largest share gas reservoir.

The impetus for drilling impermeable shale prospects was the extremely high natural gas price. For nearly four years, from December 2004 thru November 2008, Henry Hub gas averaged $7.80/mm BTU. Prices peaked at $12.86 in April of 2008, just a few months before the commodities crash and the global economic crisis.

By the early 2010s, drilling and fracturing techniques were refined enough that they were successfully applied to tight, light oil reservoirs. The shale oil game was on and the Bakken Shale was the place to be. North Dakota soon became the second largest oil producing state. This boom was followed by the Eagle Ford play in South Texas in the mid-2010s; now the Permian Basin of West Texas and southeastern New Mexico has dwarfed all others with production of over four million barrels per day.

Folks, that makes the Permian Basin the world’s fourth largest oil producer behind Saudi Arabia, Russia, and Iraq. That my friends, is incredible!

Both the shale gas and shale oil booms were developed by small to medium-sized, independent exploration and production companies (E&Ps). As the play has grown exponentially, big oil is moving into the Permian Basin with multi-billion dollar acquisitions and aggressive production plans. 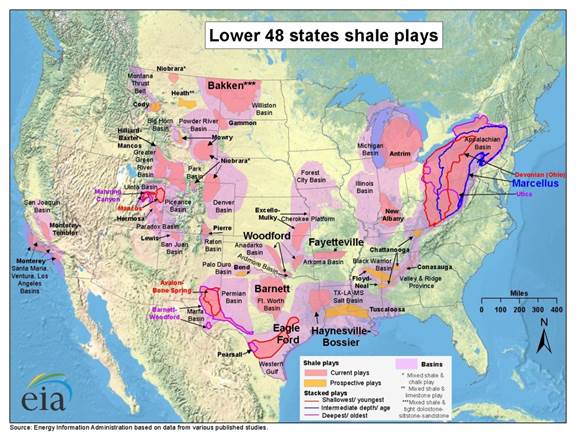 Here are some astounding American petroleum production numbers before and after tight shale drilling made its impact:

This 59-year chart of US oil production tells it all: 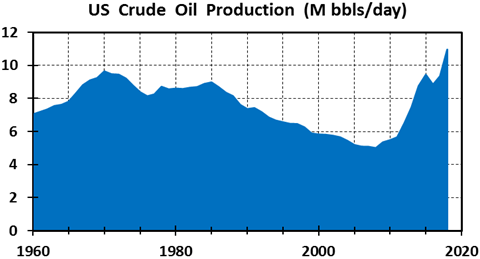 American oilmen have turned former petroleum source rocks into reservoir rocks by exploiting tight shale formations via horizontal drilling and fracking. Despite continually-rising world demand, booming U.S. oil production now dictates the quantities that OPEC, Russia, and other exporters can pump to maintain relatively high prices and meet their internal revenue requirements. Both OPEC and Russia have set quotas and cut back production over the past two years because they cannot compete with the low-cost and high demand, American light crude oil.

That said, America cannot run on light crude only. Heavy crude oil is required to produce a variety of fuels (e.g., aviation, bunker, diesel, and kerosene) and many other derivative products (e.g., asphalt, lubricants, motor oils, and petroleum coke).

Moreover, thicker oils are required by many refineries along the Gulf Coast, Midwest, and Southern California that are designed to process blends containing heavy sour crude.

While we produce significant amounts, dominantly from California but also from Louisiana, Texas and Wyoming, we will remain net importers for the foreseeable future.

We need an integrated North American energy market to compete effectively with OPEC and Russia.

The United States, Canada, and Mexico require more pipeline links. Projects such as Keystone XL (approved by Trump) and new gas pipelines to Mexico are designed to expand connections within the North American energy sphere. But others are needed to receive heavy crude from the north and send nat gas to the south.

Unfortunately, our best friends forever are not always on board with proposed trade and infrastructure deals. Recent legal rulings have at least delayed if not scuttled the Trans Mountain Pipeline and Enbridge Pipeline projects that are designed to transport oil from Alberta to British Columbian ports and on to Asia. Their benchmark Western Canadian Select (WCS), a heavy and sulfur-rich crude oil, has become even more isolated and captive to the U.S. market. WCS currently trades at a 25% discount to WTI, partly because of inadequate pipeline capacity.

America’s shale oil future appears to be quite positive but it is not without significant challenges:

Four new operations are under construction and coming on line this year; two have announced final investment decisions and are scheduled for 2022 and 2024; seven more have gained or await federal approval this year with timelines of 2022-2024. LNG projects are capital intensive, competition is keen, and banks want to see firm contracts before proceeding with loans.  LNG exports are a key component of our total petroleum import/export balance going forward. 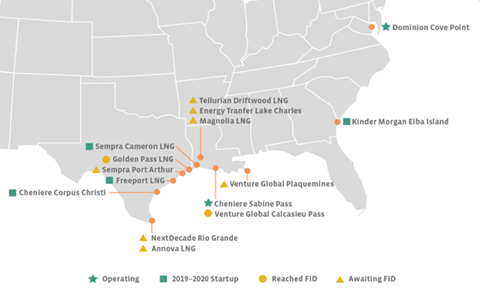 In the second wave, E&Ps have better fundamentals, bankers are more discerning with loans, and cost of production is significantly lower with better margins. Finally, the largest market cap oil companies have entered the sector with big growth plans and in M&A mode.

In the early years of shale development, predictions of steep and rapid decline curves clouded the sustainability of fields and certainly hampered investment. Evidence shows that declines in the Permian are initially steep but flatten out quickly. Some wells have been producing for over a decade.

Based on admittedly short time periods for modeling, these unconventional oil and gas plays appear to have significant longevity.

Plus there is strong upside as the shale business currently recovers only about 10% of the contained oil compared to 30% in conventional sandstone host-rock reservoirs. In addition, there are many stacked benches in the Permian Basin that can produce oil once they are stimulated by fracturing. Only the low-hanging fruit has been developed so far.

As with all petroleum ventures, shale exploitation is and will always be a capital-intensive business, not only with initial capex and but also the sustaining capital required for new wells and reworking of older ones.

That said, over the past few years, advancements in drilling, fracking, completion technologies, and economies of scale have enabled American oilmen to employ less capital to produce more oil at lower operating costs.

In short shift, they have developed ingenious techniques not only for horizontal drilling and hydrofracturing, but also with state-of-the-art science, including early applications of supercomputing, 3D micro-seismic modeling, and visualization technology. In less than a decade, these oilmen have turned our country from a 45-year OPEC hostage to a projected net exporter of petroleum with the next two or three years.

It is amazing testimony to the power of venture capitalism and entrepreneurship.

In my opinion, all red-blooded Americans should be proud of this accomplishment and overjoyed that we will soon be energy independent and no longer beholden to unsavory Middle Eastern dictators and despots.