We have been focused on the upside price move in Gold and Precious Metals, we've been engaged in multiple private conversations with members and friends about the potential for a renewed debt crisis between now and the end of 2020.

This research post should help to put some perspective into what we believe the next 16+ months of trading and what the US economy should look like for our followers.

First, we want to talk about one of our most favorite topics of the past 24+ months – the “capital shift” phenomenon.  We first identified this facet of global economic dynamics back in 2015 or so.

As the global economy shifts focus on risks and opportunities, capital shifts with these expectations and moves away from risks and into investments that are seen as opportunistic and safer.  This dynamic is still very much at play within the global markets.

Second, we want to discuss global Central Banks and their attempts to spark growth after the 2008-09 credit crisis event.  Even though Global Central banks have continued to spark some type of fundamental economic growth over the past 9+ years, these QE activities have also produced a very high level of debt arising from extended government spending, consumer spending and lack of real savings initiatives.  While governments and central banks were chasing the “gold ring” of inflation, they lost focus on the fundamental elements of the economy which are debt levels, price valuation levels and future operational capabilities with regards to debt vs. income.

Third, Gold and precious metals have started to rally from levels near historical low points.  This increased upside price activity is a very clear sign that FEAR and GREED have re-entered the global markets and that global investors/traders are starting to react to unknown and unseen potential risk factors.  Are they reacting to future trade issues, future debt issues, future growth issues??  What is it?

Th reality is, we never really know until the event is complete as the hind site is 20/20. What really matters is understanding that this type of money flow is happening and that we have a way to track and forecast these levels of fear and greed.

The gold chart below shows our expected price of gold forecast from October of 2018. As you can see, we identified the bottom and rally, then the more recent bottom in April/May, and today we are experiencing the extended rally (fear/greed) driven rally.

Not only can we accurately forecast gold long term moves but we can also pinpoint short term bottoms and tops using our intraday cycle and fear/greed tools as shown here. 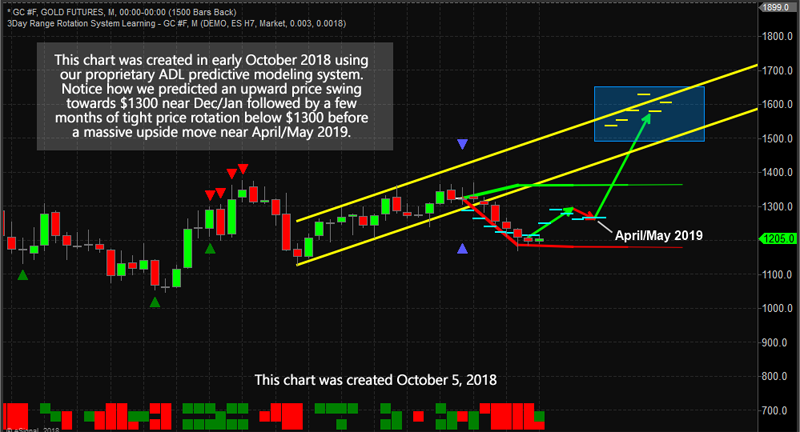 Forth, the breakout economy in the world, the US, is not something that happened by chance.  After the 2008-09 global economic crisis, the US entered a period of extended QE throughout President Obama's term.  The US QE functions didn't really end until just before the 2016 Presidential Elections.  Thus, from roughly 2009 till 2015, the US was engaging in some form of QE measures which supported the global Central Banks by allowing for cheap US Dollars.

It is our belief that this fundamental change in the US Federal Reserve, wanting to attempt to normalize rates, while President Trump's attempt to restructure and settle more suitable trade deals with China, Europe, Mexico, Canada, and others has disrupted the apple cart – so to say.

The easy access to the US Dollar is gone.  Easy trade and special deals for China and others are gone.  The US economy is strengthening because of fundamental economic strength – size, capabilities, pricing valuations and the attraction of foreign capital investments.

All of these points raise some very interesting questions – primarily “what is the unwinding event going to look like?”

Global Central banks will do everything within their power to push off any signs of crisis events and to foster some level of economic growth for as long as possible.  We all know this to be true.

The spark all these Central Banks have been waiting for is economic growth.  What happens if that growth initiates at the same time that Inflation initiates at a 2x or 3x rate?  Economic growth would support increased demand for commodities and other items.  This increased demand will likely prompt moderate inflation – making these items even more expensive to purchase much beyond the pricing we see now.

A combination of moderate growth and increased inflation in the US could prompt the US to raise rates even further in an effort to contain inflation.  A spike in rates, at this point, could completely destroy support for current asset levels, Real Estate, Debt and other operational components of our already stressed local state and federal governments.  Yikes.

We believe we know what the unwinding event will eventually become once the trigger event initiates the move.  We believe it will become a price “revaluation” event where assets and commodities prices attempt to identify an “equilibrium” based on historic and current supply/demand expectations.  The one caveat to this whole presumption is DEBT – what about all the DEBT?

In Part II of this multi-part research post, we'll share our current understanding of the market cycle and what the next 16 to 24 months will likely bring for investors/traders.

I urge you visit my Wealth Building Newsletter and if you like what I offer, join me with the 1 or 2-year subscription to lock in the lowest rate possible and ride my coattails as I navigate these financial market and build wealth while others lose nearly everything they own during the next financial crisis. Join Now and Get a Free 1oz Silver Round or Gold Bar!

I can tell you that huge moves are about to start unfolding not only in metals, or stocks but globally and some of these super cycles are going to last years. A gentleman by the name of Brad Matheny goes into great detail with his simple to understand charts and guide about this. His financial market research is one of a kind and a real eye-opener. PDF guide: 2020 Cycles – The Greatest Opportunity Of Your Lifetime

As a technical analysis and trader since 1997, I have been through a few bull/bear market cycles. I believe I have a good pulse on the market and timing key turning points for both short-term swing trading and long-term investment capital. The opportunities are massive/life-changing if handled properly.